Since we’ve been playing with a Nokia Lumia 1020 for a couple of days, it’s now time to also test a game on the device. Said game is the Halo Spartan Assault title, that also has a Windows 8 version, not only a Windows Phone 8 one. 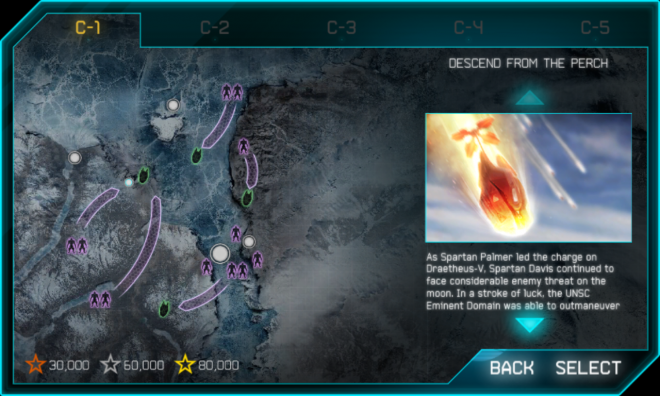 The title was launched in July this year and it’s priced at $7. It’s a top down third person shooter developed by 343 Industries and Vanguard Entertainment. Its story is set between Halo 3 and Halo 4 and the game allows you to control soldiers Edward Davis Sarah Palmer, as they fight aliens, part of the Covenant.

Halo Spartan Assault offers you 25 single player missions and the title takes up about 700 MB of storage. The control is done with the aid of two virtual joysticks shown on the screen, one that allows you to direct the character and the other used to direct your shooting. I recognized most of the aliens and weapons from Halo 3, including that cool sniper, that kills foes in a shot.

You’ll be able to drive around in tanks, use turrets, collect weapons left behind by enemies and throw grenades with a double tap. You can also make missions more difficult by associating an extra skull to your objective and those will give you extra experience points. This Halo release comes with beautiful graphics, a nifty atmosphere, but it’s clearly not the Halo you were expecting.

Cutscenes do look great and you have a great use of your armor’s abilities. The game is quite challenging and will keep you buy for a few hours, but that’s about it. We give it an 8.7 out of 10 and you can download it from here.