HTC recently teased what seems to be the first truly 4G handset that they’re going to announce on January 6 at CES. Word has it that is the HTC Incredible HD model they’re preparing to launch, also known as Mecha. 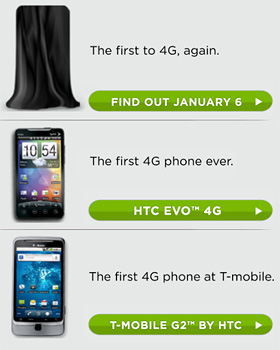 In case some of you think that HTC already launched a 4G phone, guess again, since the T-Mobile G2 was a 3.5G handset, while the HTC EVO 4G was a WiMAX unit, which is not actually 4G. Well, the HTC Incredible HD is going to support LTE connectivity, through Verizon, so real 4G GSM is coming.

No info on this handset yet, aside from the fact that it looks a bit like HTC Hero from underneath that black cloth. CES 2011 will reveal more.