We’ve heard about HTC making a feminine phone for a while now, but it’s only this time that we can see a picture of the device. Although it’s a pretty unclear one and the dock takes up more space in the pic, we can get an idea on what this girlie device will look like. 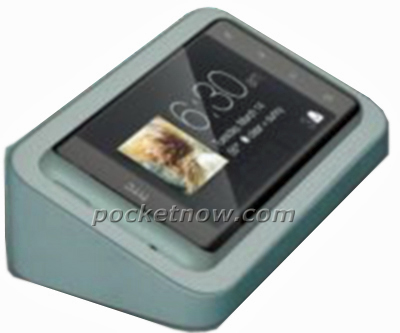 This is truly Android material, as shown by the capacitive buttons beneath the display and I can’t help but wonder what the variation will be in the case of the HTC Glamor, another supposed feminine phone. Bliss will be released on Verizon with a ton of color matched accessories, ranging from the usual charm the ladies hang on their handset to all sorts of docks and cradles.

HTC Bliss has had its case leaked on the web last week and also EXIF data popped up on the web recently as well. We’re expecting a mid end device here, maybe with a sub 1GHz CPU, 512MB of RAM, a 3.3 to 3.8 inch display and a 3 to 5 megapixel camera. Would you ladies buy it?