Announced at MWC 2010 last week, HTC Desire is considered by many the twin of Google Nexus One, since it packs basically the same specs. Both devices are made by HTC, after all and if you’re wondering what the difference between them is, Slashgear might have a clue. They’ve recently published an article on this topic, which we’ll dissect in the following lines. 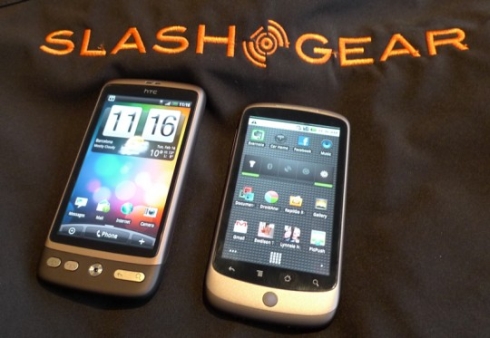 Both handsets use 3.7 inch WVGA AMOLED capacitive touchscreens, 5 megapixel cameras with LED flash and they both run Android 2.1. Nexus One is a bit thinner and another noticeable difference is the fact that Desire comes with an optical joystick, while the Google phone uses the traditional trackball.

The newer HTC lacks active noise cancellation and triband HSDPA/WCMDA support, both found on Nexus One, if you’re looking for extras. Desire makes up what it lacks in connectivity through a larger amount of RAM memory, 576M, instead of the 512MB on Nexus One. The device shown at MWC 2010 also comes with a bigger, 8GB microSD card in the box, while the Google Phone only delivers a 4GB one.

It’s interesting to mention that these smartphones sport a 1400 mAh battery, that on the Nexus One provides 250 hours of 3G standby time, while Desire is able to last for 360 hours in standby mode, although its talk time is 30 minutes lower than the one of its “rival”. Another advantage of the HTC Desire is its HTC Sense UI, but that can also be found on Google Nexus One, thanks to a port that we’ve recently seen on the web.

As far as the price is concerned, Nexus One costs $634, for Europeans looking to import the device from the US, while Expansys readies Desire for sale with a $681 price tag. However, HTC Desire will probably hit all major European carriers with a very decent price tag, while Nexus One is yet to get an appealing offer of this kind.

Another difference, if you want, is the fact that the Nexus One is already available, while Desire is fresher and it’ll only hit the market in April. It’s your call, folks, although Desire seems a bit more tempting.