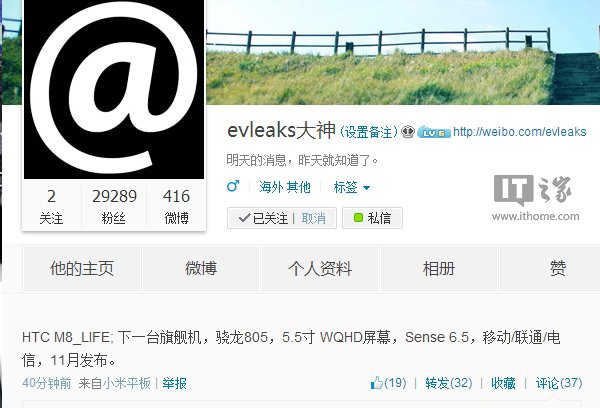 Well, there are two pieces of news here: one, HTC is preparing another high end device with a Quad HD display and the second @evleaks may be back in one form or another. A weibo account under his name came up and apparently it has been rented somehow to another person by Evan Blass himself.

In the meantime, the handset that’s the topic of the leak is expected to be named HTC M8 Life, at least as a preliminary codename. We’re dealing with a 5.5 inch Quad HD phablet with a Snapdragon 805 processor and HTC Sense 6.5 on top of Android. The product is said to come via China Unicom and China Telecom and it’s rumored to be released in November.

Other specs weren’t mentioned, but I’m pretty sure we’ll get 3 GB of RAM, at least 32 GB of storage and LTE. With a bit of luck, this may end up being an Android L release and while the camera is a mystery, there are two ways to go here: Duo Camera or a 13/16 megapixel shooter with 4K video capture. Does this leak sound realistic to you?