HTC One X has finally arrived on our testing table and it’s proving to be a total delight. This handset is the first quad core phone to reach the market and the first One Series model from HTC to be launched. The One Series was announced at MWC 2012, where we’ve given you hands on experience with all their new devices. And now we’re back with a full review of the HTC One X, the highest end model of the bunch. 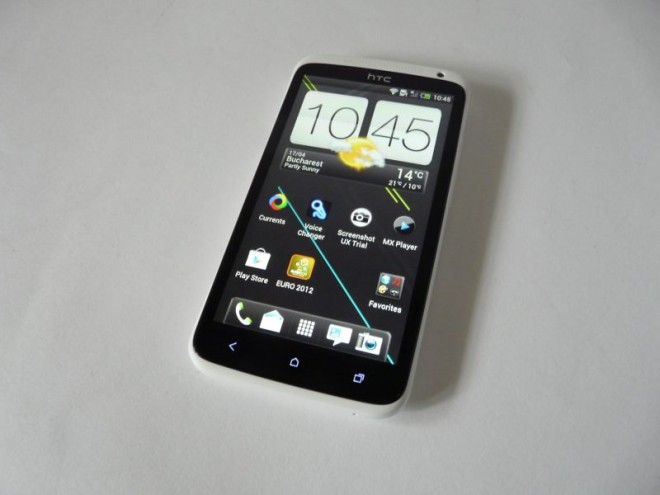 Keep in mind that the international version is the HTC One X, the quad core one with Tegra 3 CPU, while the USA one is the HTC One XL, with LTE and a dual core Snapdragon S4 processor. The handset has a beautiful polycarbonate white case (it’s also available in black), with a nice camera protuberance, a minimalistic format that uses as few ports as possible. The battery is non removable, there’s no microSD card slot and you pull out the microSIM tray from the top of the phone using a sharp tool like a paper clip that has been opened up.

This slightly curved smartphone has a microphone at the top and one at the bottom for noise canceling purposes. It’s god a Super IPS LCD 2 display, with a 4.7 inch diagonal and 1280 x 720 pixel resolution. The same screen has a density of 312 ppi and it’s protected by Gorilla Glass against scratches and other unwanted damage. HTC One X offers 1GB of RAM, 32GB of storage (26GB user available) and a quad core Tegra 3 processor with a 1.5 GHz frequency. As you may already know, there’s actually a fifth core, used for mundane tasks, letting the other cores rest and using up less power. 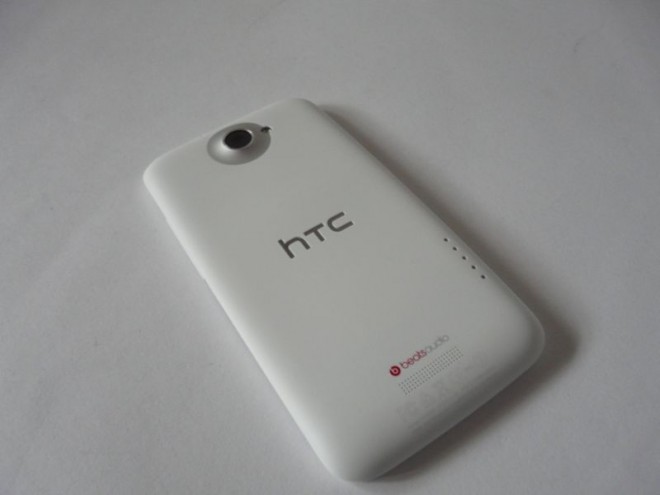 And finally, the features of this quad core phone include an accelerometer, gyroscope, proximity sensor and compass. On the connectivity area, we have HSDPA at 21 Mbps in speed, WiFi, DLNA, Bluetooth 4.0, NFC and microUSB 2.0. The device managed to scored 4553 points in Quadrant and 11.207 in AnTuTu, very reasonable scores, especially if you compare the Quadrant one with the 2.000 points that the HTC Sensation got exactly one year ago. Going to the power consumption area, we get a Li-Po 1800 mAh battery, good enough for 2 days of fun.

As far as the software goes, HTC One X is all about Android 4.0 + HTC Sense 4.0. Luckily, HTC didn’t play with Android 4.0 customizations too much, keeping the look of the new HTC Sense more minimalistic. They got rid of that useless carousel and also you can see that now we have 3 capacitive buttons below the display, used to control Android 4.0. No trace of search or menu button any more, there are only the Home, Back and Recent Apps buttons. The latter opens up an interesting set of previews for apps, that are shown as big thumbnails that are easy to swipe in order to shut down.

The settings area can be accessed from the notification bar and it includes the connectivity slider buttons that allow you to activate or deactivate various functions. The app area has also changed a bit and now it features a link straight to the Google Play Store, shown up above. The widgets section is the most changed, with the Home screens placed at the top of the window and the widgets, apps and shortcuts being fitted perfectly to the screen. The camera’s UI has also had a revolution of its own and it looks great now. It’s also very efficient, because there’s no special button to move from filming to taking pics and viceversa. You can do each at any time or even simultaneously. 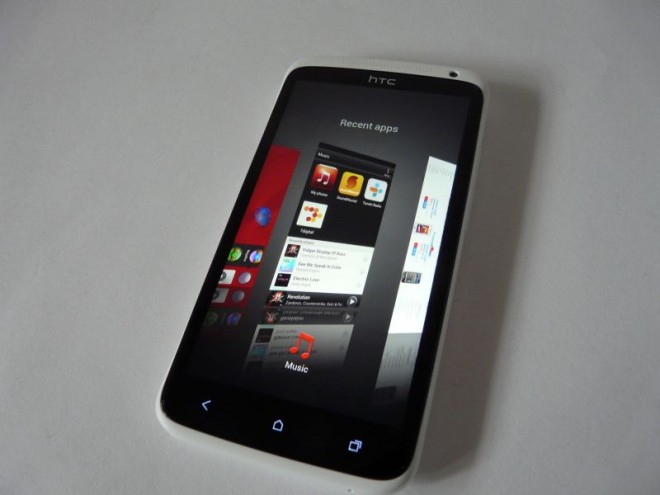 The Music app is also changed, with some very interesting features, music applications integration (Soundhoud and other similar software) and a new fresh look. The handset is branded with Beats Audio, so that means the technology is on board, but the headphones are not in the package sadly, at least not on our test version. The One X can play back AAC, AMR, OGG, MID, WMA, MP3 and WAV files, plus MP4 and 3GP, but strangely not AVI. And finally we’ve reached the camera, a stunning improvement from HTC.

There’s an 8 megapixel sensor here, allowing you to take pics and videos at the same time and even take a picture while watching a video in the gallery. The camera does 1080p 30 fps video capture and it has a bunch of new effects included, as well as a pretty good LED flash, with many functioning modes. The camera also comes with HDR, Burst Mode shot that you can see in the video review and the all the performance here is generated by the Imagechip technology developed by HTC over the past year or so.

It takes a mere 0.7 seconds to reach photo shooting mode and take a picture, plus 0.2 seconds more between the following pictures. You also get a Slow Mo feature and a movie editor among the apps. A fantastic camera, I have to say that again! It surpasses the one on the Xperia S and easily rivals the camera on the iPhone 4S. Overall, HTC One X is the perfect phone, but only if you can adapt to its huge diagonal and HTC Sense. Some people prefer stock Android, 4 inch screens and dual core processors, that in some areas are faster than Tegra 3… Anyway, this is a device that gets 9 out of 10 from me and a very solid purchase option, that I recommend, unless you want the thinner One S.