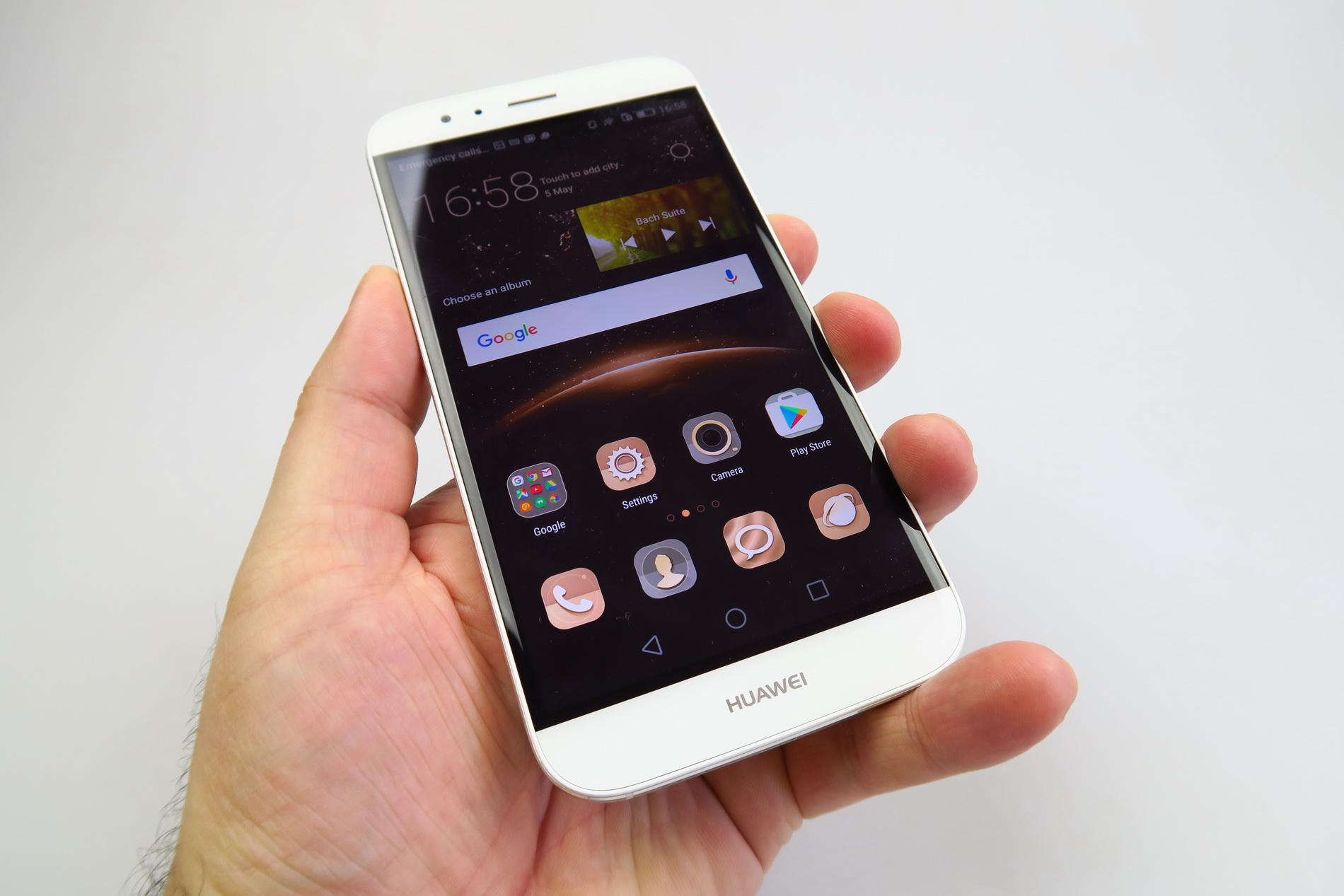 Huawei phones are pretty solid, in the high end and midrange area and while they use premium materials, their designs aren’t exactly award winning. All the Mate and Honor models look pretty much the same, that’s why the Huawei G8 feels like a bit of an outsider. It was announced at IFA 2015 with the Mate S and it gets reviewed below. Priced at $349, this device is also known as Huawei Honor GX8. 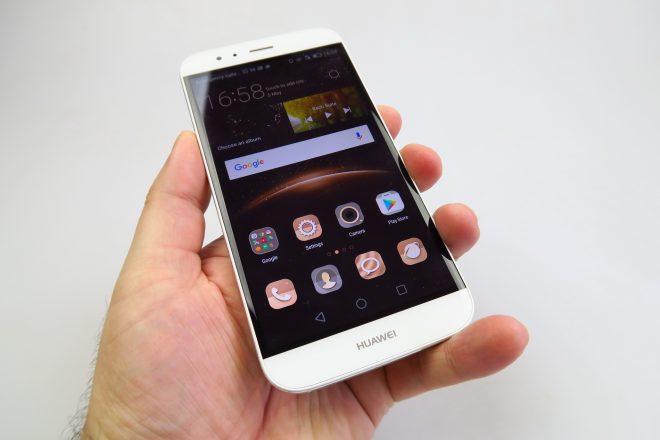 It fits somewhere between the Honor and Mate models and as far as design goes, this is a 5.5 inch phablet and one of the widest Huawei phones we’ve tested. It measures 76.5 mm in width, meaning it’s wider than the Galaxy Note 5. However, it’s less wide than the Huawei Mate 8, with its 80.6 mm width. Available in golden, gray and silver, the handset is massive, but pretty.

Huawei G8 has a 7.5 mm waistline and weighs 167 grams, being thicker and heavier than the Mate S. There’s a 2.5D glass panel upfront, with narrow bezels and this model is quite comfy and has good grip. One hand usage is easy, in spite of the big width, at least for my big hands. Buttons are comfy and the smartphone has an unibody metal case. 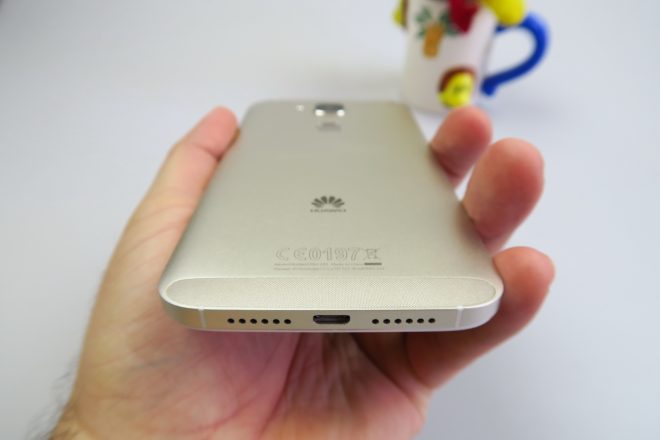 The back is gently curved and we’ve got a top and bottom antenna lid made of plastic. Overall, the G8 is solidly built and elegant, plus it strays from the usual norm of Huawei midrangers. Now off to the hardware! We’re dealing with a 5.5 nch IPS LCD screen here, with a Full HD resolution and 401 ppi density. The official site mention the screen as a TFT though…

The video player has DTS sound and Pop up Play features, plus a play speed option. The actual screen experience involves OK brightness, vivid colors, but also realistic, plus some pretty annoying black edges around the image. View angels are wide, the contrast is mediocre and the 2.5D glass is rather reflective. Pixels are of the RGB Stripes variety and when we used the luxmeter to measure the brightness we achieved 351 LUX. 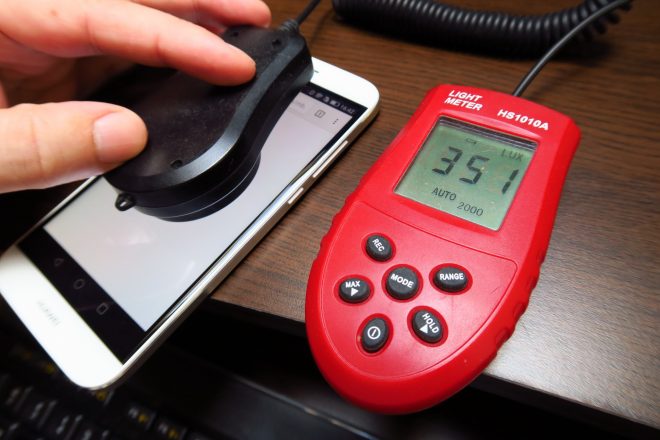 This is unimpressive, scoring below the Huawei P8 Lite, Xperia Z1, but at least above the LG G3 and Huawei Honor 7. Special options related to the same screen are Color Temperature (warm/cold), font size and brightness. The display is OK, but it could be brighter. Continuing with the hardware setup, there’s an octa core Qualcomm Snapdragon 615 CPU inside the Huawei G8, 3 GB of RAM and 32 GB of storage.

Then there’s a microSD card slot and the experience was fluid and lag-free. It’s more snappy than the Huawei Honor 5X and runs games OK, including the likes of Riptide GP2. The benchmarks place us on the same portion of the playing field as the Galaxy S5, above the Lenovo Phab Plus and I noticed that the 3D results are not impressive and so is the GPU. 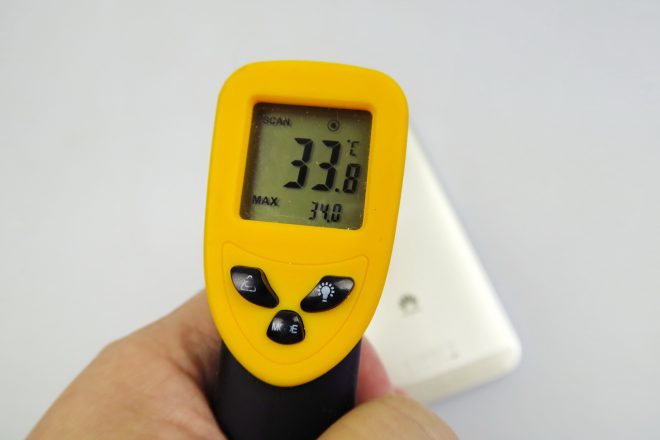 In 3DMark we’re below the Galaxy A5 (2016). We also did two temperature tests, achieving 34 degrees Celsius after 15 minutes of gaming or 30.4 degrees after using the GFXBench test, so there’s no overheating and performance OK, but excluding the GPU. We have to address the acoustics and as usual we get dual grilles, of which only the right one is the speaker.

The audio player on board is the typical one for an EMUI device, lacking an equalizer and only offering a DTS audio option. The speaker is not very loud, so the volume is rather OK. We’ve got crisp sound, no distortion and an OK bass. The decibelmeter showed a value of 80 dBA, which once again is not impressive. This places us below the LG AKA and Huawei Honor 6, but above the Samsung Galaxy A5 (2015). 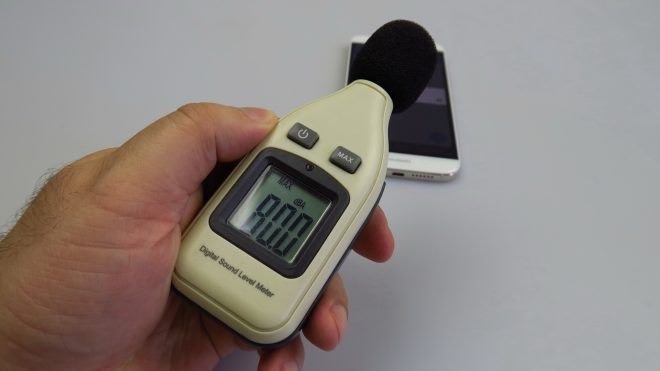 The headphones are typical for Huawei, made of plastic and not very comfy. They have a big remote, a tangling wire, but they’re loud and clear, with an OK bass and crisp sound. FM radio has a rather slow scanning and overall I feel the acoustics could be louder. Now let’s discuss the camera! We’ve got a 13 megapixel back shooter, with dual LED flash, optical image stabilization and F/2.0 aperture. 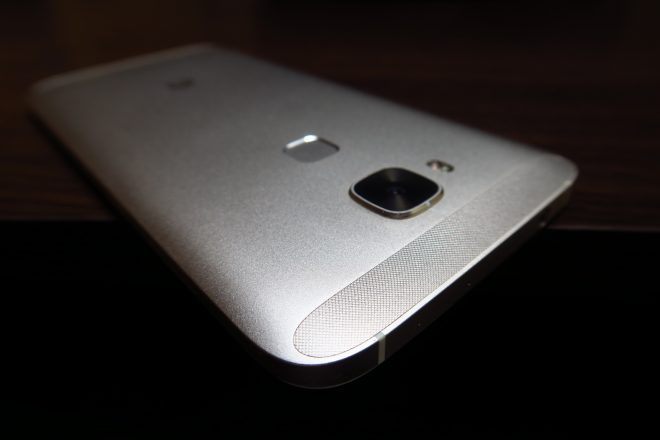 Of course, you can tweak ISO, white balance,  exposure, saturation, brightness and contrast. On the right side of the UI there are effects, Time Lapse, Video, Photo, Beauty and Good Food capture modes. If you have a glance at the day time gallery, we registered some sunny and cloudy conditions (alternating) and those brought on realistic colors, good brightness and we also got a crisp selfie, with good skin and hair texture.

The HDR made the shots too washed out and the flash proved to be great, when we took grafitti shots below that bridge. Clouds were excellently rendered by the camera, an aspect sometimes even neglected by bigger players in the camera field. We zoomed in all the way to the max and got some pretty good results, detailing a crane that was really, really far away. 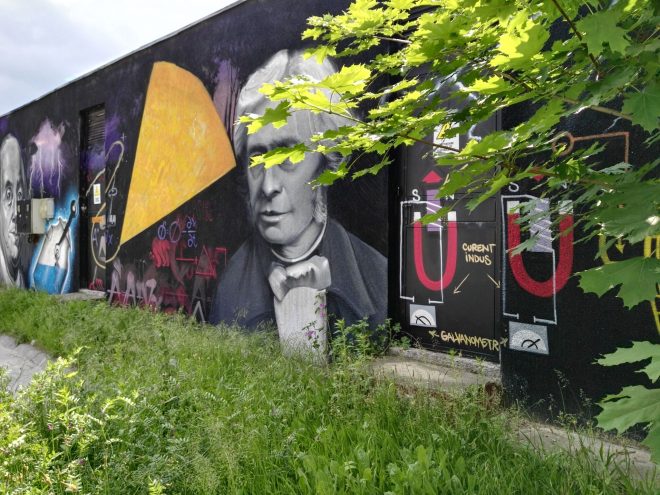 In the shade the camera feels like it’s losing a bit of the premium gloss of the images. I also felt that the focus was quite good and so were the details in landscape mode. We also played with the All Focus feature and alternated focus on that toy bike in the park. Focus was quite good, no matter the situation. In the sunnier day, we had a good wood texture and some very nice flower closeups.

The panorama was pretty wide, at 16.768 x 2688 pixels in resolution and this feels pretty much like the Huawei Honor 5X, quality-wise, or maybe a bit above, but the selfie is below that model. Low light shots were surprisingly good, reminding me of the surprise I had when playing with the LG Nexus 5X. The captures were bright and clear, we had OK light halos and no grain. 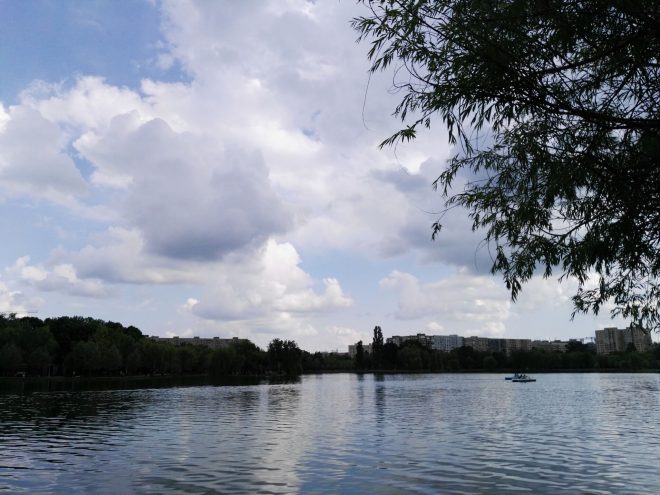 Colors were also good and the building textures looked nice. We had great details, good closeups and I’d place this phone in the top 10 handsets with good low light quality. It’s above most Huawei Honor models, all the ASUS ZenFones and Galaxy A5 and A7 2016. As far as video capture goes, we captured video in MP4 format, Full HD resolution, at 30 FPS and with a 20 Mbps bitrate.

The clarity was OK and colors were good, plus the microphone handled all noise OK. There was a bit of detail loss when zooming in and the image was rather shaky. The stabilization was so-so, not very impressive, but at least there was no focus loss. I liked the exposure change and the clarity here. Even the 720p capture was nice, since I took a video from a moving car and still it looked nice, well stabilized and clear.

Low light videos are just OK, but there’s quite a bit of detail loss. For a midranger, this model does a quite decent video capture, surpassing the Huawei Honor models for example. The web browser on board has so-so speed, but its benchmarks were rather poor. The virtual keyboard on the device is comfy, mostly thanks to the wide format.

On the connectivity front, there’s LTE Category 4, with up to 150 MBps download speed, GPS, Glonass, Bluetooth 4.0, WiFi b/g/n in just one band, microUSB 2.0 and dual SIM slots (nano SIM both and one used as a microSD card slot). We also get NFC, by the way. The phone calls offer good signal, OK clarity, a great microphone, but they could be louder. 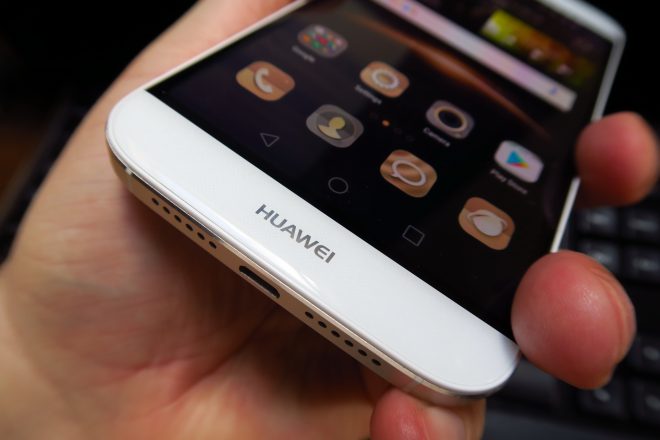 In the dialer section we have access to features like Speed Dial, Privacy Protection and a Harassment filter. The Speedtest we did showed a download speed of 20 Mbps and upload of 22 Mbps, not much above average. And now it’s time to discuss the battery. This is a 3000 mAh unit, 300 mAh more than the Huawei Mate S. It provided us with 8 hours and 6 minutes of video playback time, a very modest result, even for a midranger.

It’s 2 minutes below the Huawei Mate S, but also above the ASUS ZenFone 2 and HTC Desire 820. I should also mention it’s placed below the HTC One A9. In PCMark we achieved 6 hours and 58 minutes, which is not bad at all and it certainly beats the Samsung Galaxy S6 Edge and Nexus 6P, which is an excellent performance. Still, we’re below the Lenovo Vibe X3. 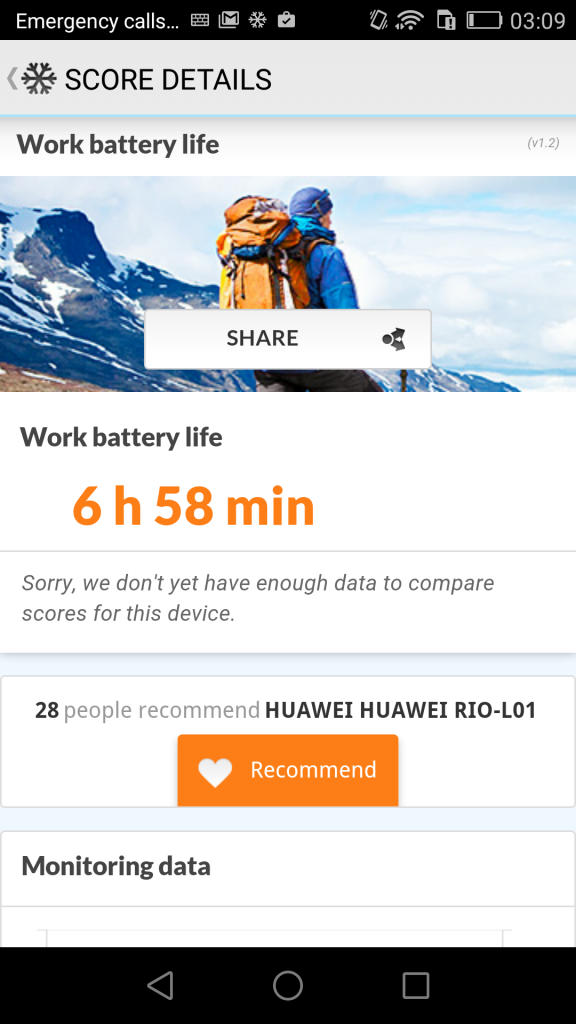 Charging requires 3 hours and 5 minutes, being quite long and this is where we placed below the Leagoo Lead 1 and the Lenovo Phab Plus for example. The Settings area includes battery options, like a Power Plan with options like Ultra (just basic features), Smart and Normal. The latter two perform slight adjustments to the CPU and network usage.

You can also allow apps to run in standby mode and keep the WiFi on during sleep. Time to discuss the OS, UI and apps. Huawei G8 offers pretty much the same experience as the Huawei Honor 5X, providing Android 5.1 and EMUI 3.1, with a beige skin on top. Multitasking involves 4 thumbnails showing running apps, closed with a swipe up. 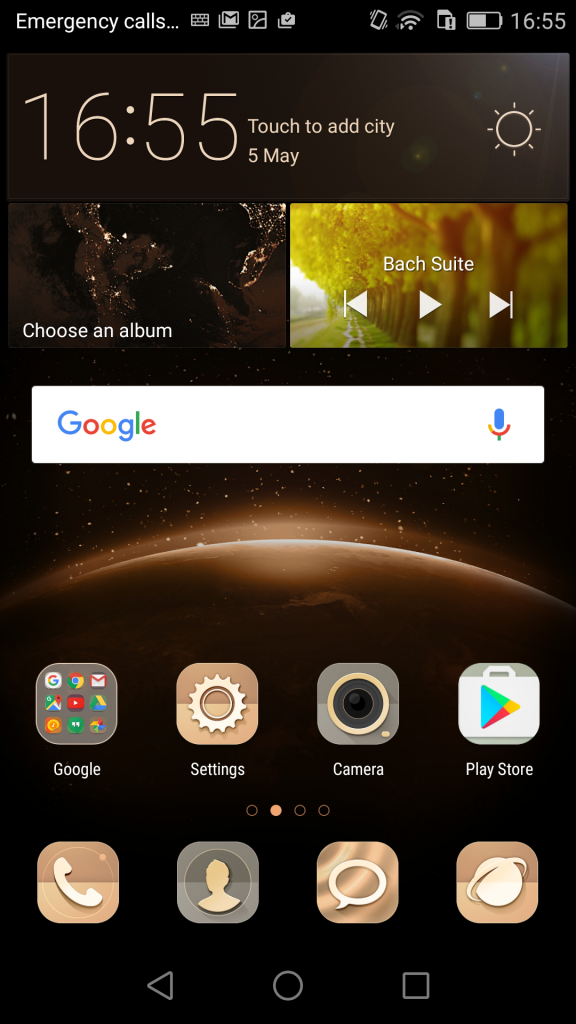 There’s no app drawer here, so all the apps are placed on the homescreens. The icons are very minimal and the lockscreen offers shortcuts for 4 apps when you perform a swipe up. If you pinch a homescreen, you will trigger the wallpaper, widget, transition and layout area. A swipe down in the homescreen triggers the notification area, shaped like a timeline and swiping to the side goes to the Quick Settings.

The Settings are typical with options like Home Screen Style, DND and fingerprint scanner features. That scanner has a fast setup, it’s fast and accurate when unlocking the device, however it has more purpose than that. You can access a safe area and app lock, answer calls using it, take a picture and show a notifications panel. 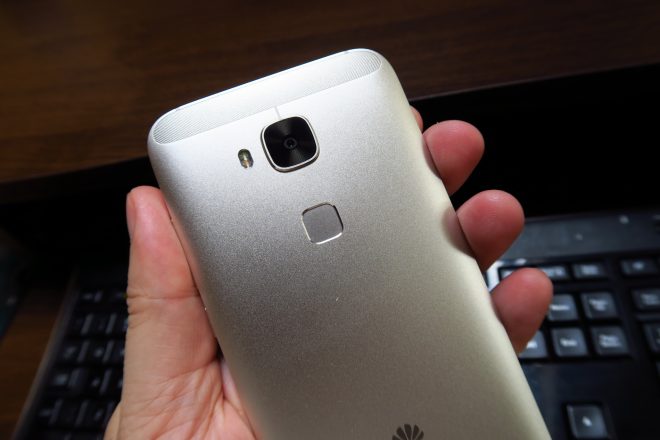 Huawei also included a Motion COntrol feature, letting you draw a letter to access an app or do a double tap to lock/unlock the screen. Then there are the nav bar tweaks, One Hand UI options, Gloves Mode and Suspend Button. Here comes the bloatware. We counted the apps preinstalled on the phone and got up to 59 of them.

5 are games, 15 are Google apps and then there’s the useful Phone Manager, Notepad, Themes, Weather and we also get 3 social networking apps. Time for the Pros and Cons!

Huawei G8 has to offer a solid design, good low light capture and a good continuous usage battery time. Other than that it’s just like any other midranger. We can call it a gaming phone and concert phone, on account of the battery, low light performance and microphones. This makes it an LG Nexus 5X rival, but that one has the upper hand thanks to the price… However, the G8’s design is much more premium. The choice is yours. The updated price is here.