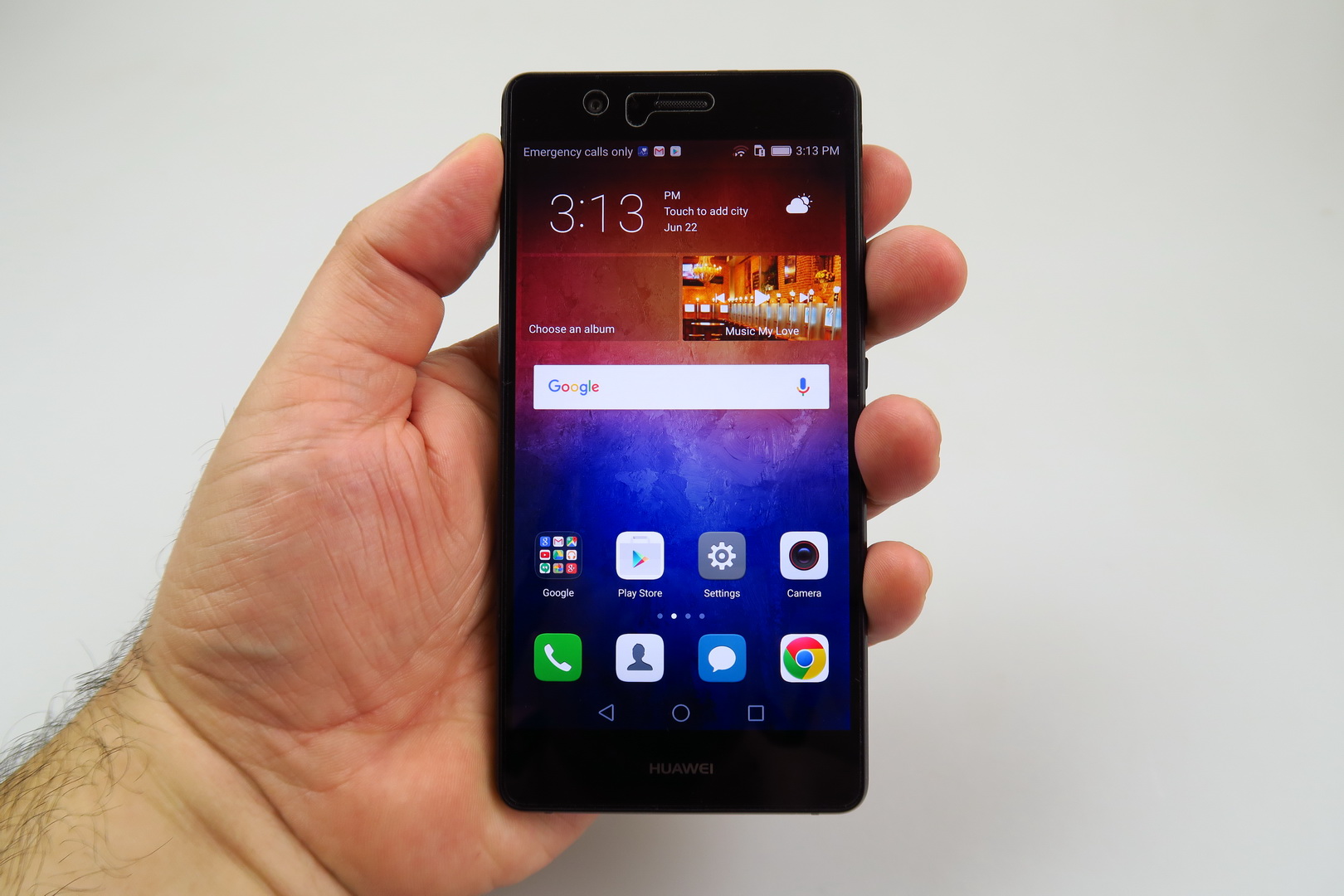 Huawei P9 Lite completes the trio of devices from the P9 lineup we’ve reviewed, after the P9 and P9 Plus. It’s the follow up to the P8 Lite, that was a big hit, so it has big shoes to fill. It’s priced at $350, which makes it pretty affordable and a midrange alternative to the P9. 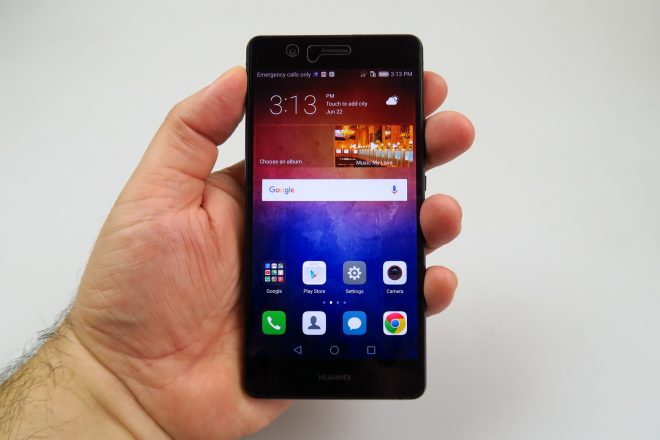 This model has an aluminum frame and a polycarbonate back, with a metallic look and a soft touch feel, that’s quite nice in the hand. It’s a well built device, with a band of plastic or glass over the camera area, keeping the styling of the P9 and Nexus 6P. We also get rounded edges, a narrow bezel and this handset is one of the most metallic looking plastic and metal devices. 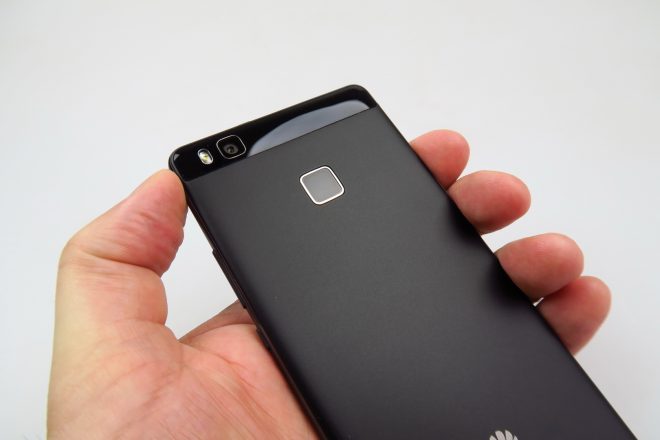 We find it to be both solid and comfy and no sacrifices seem to have been made here. Let’s talk about the display now. This is a Lite device, that strangely keeps the quality screen of the mainstream P9, the 5.2 inch IPS LCD Full HD screen. It has the same diagonal and resolution as the P9, as well as the same technology. It’s certainly a bump up from the P8 Lite’s 5 inch HD panel.

We get in cell touch tech, with no gap between the screen and glass cover. The video player preinstalled on the smartphone comes with Pop Up Play functionality, Play Speed options and SWS Acoustic tech. The screen experience is bright, we get OK contrast and a bit of oversaturation. The image is clear and we also get wide view angles. 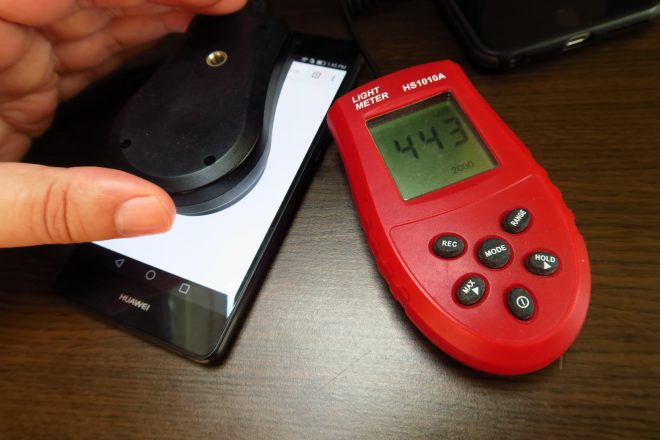 Pixels are of the RGB Stripes variety and the luxmeter showed us a value of 443 LUX, which is quite good, beating the P8 Lite’s 365 LUX. It surpasses the LG G4 and Huawei Mate 8, but it scores below the P9’s 496 LUX, or the Mate s 455 LUX. Settings for the screen include font, brightness, color temperature (warm/cold and a hue circle used to select the proper hue).

It’s a good display, but needs better colors. Now let’s discuss the other hardware, starting with the CPU, which is an octa core Kirin 650 64 bit unit, an upgrade from the Kirin 620 on the P8 Lite. The GPU on this model is a Mali T830 MP2 and the phone is available with 2 or 3 GB of RAM and 16 GB of storage, plus a microSD card slot. 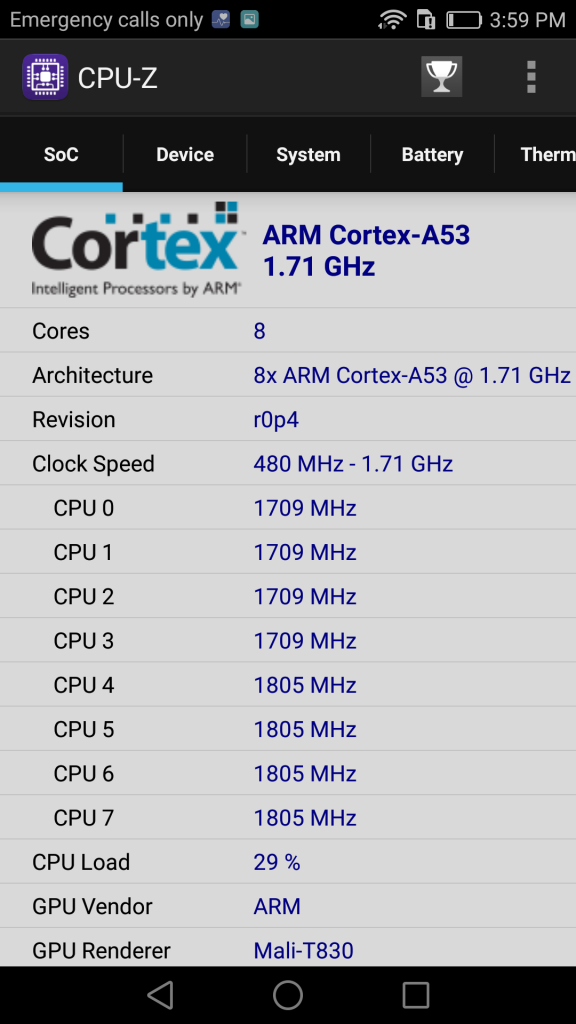 Huawei P9 Lite doesn’t suffer from lag and it comes with a fluid UI, good performance and runs games without a problem, including Mortal Kombat X. The benchmarks we did on this handset include Quadrant, with results close to the level of the Mate S and in AnTuTu we even beat the Huawei Honor 7 and Galaxy A5 (2016).

In the 3D sub test associated to the benchmark we even got past the HTC One A9, while in 3DMark Ice Storm Unlimited, we were on par with the LeTV 1S, beating the Mate S. Performance is good and we also did a temperature test, achieving 38.3 degrees Celsius after running GFXBench and 40.7 degrees after playing the game Riptide GP2, so there’s a slight bit of overheating. 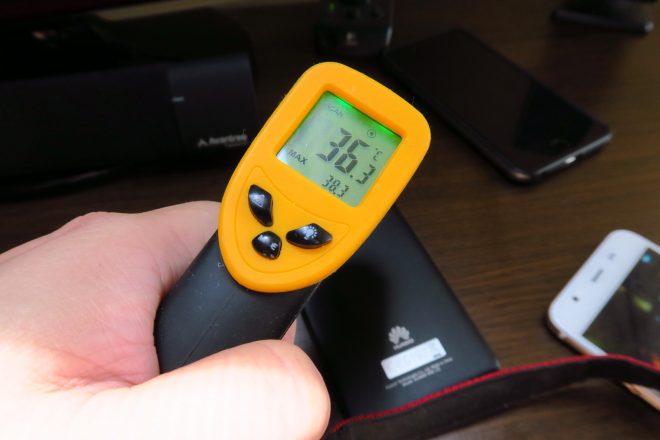 The battery is a 3000 mAh unit, quite the jump from the P8 Lite’s 2200 mAh unit and the same capacity as the P9. We did a HD video playback test in a loop, reaching 7 hours and 51 minutes, which is underwhelming, but at least superior to the P8 Lite’s 5 hour and 25 minutes, or the Honor 7. It’s also less than what the Nexus 5X achieves or the Huawei Honor 4X.

In PCMark we scored 6 hours and 39 minutes, which is OK and superior to the P8 Lite’s 4 hours and 47 minutes, plus it’s exactly the same result as the Nexus 6P. Seeing how we only got below the Galaxy S6 Edge by only 2 minutes, this is a good performance. Charging is done in 3 hours and 45 minutes, which is a huge result and not impressive. 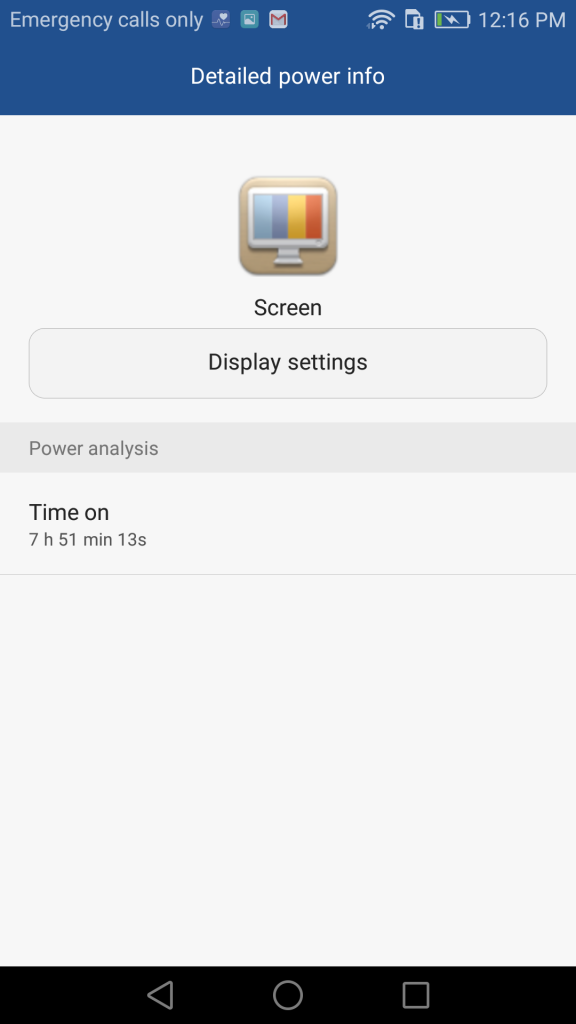 The P8 Lite was better, with 2 hours and 41 minutes of charging, that’s for sure. Settings related to the battery include the option to close power intensive apps, WiFi on during sleep and of course Power Plan, with the sub modes Performance, Smart and Ultra Power Save. The first two adjust CPU and network usage, while the last one triggers a black and white UI and only basic options.

This battery is clearly an evolution compared to the one on the P8 Lite, that’s for sure. Time to ditch the battery and talk about acoustics. Huawei offers a HiSilicon Hi 6402 DSP and a 9V Smart Pa unit. In spite of having two grilles, only the right one was the speaker. SWS technology is also here and the typical EMUI music player is preinstalled, with no EQ as usual. 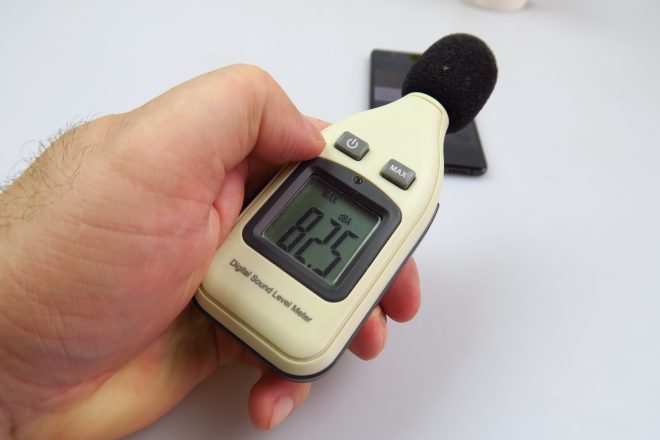 The speaker experience brought us great sound and voice, good bass, loud and clear sound, plus no distortion. We did a decibelmeter test and achieved 82.5 dBA, but it actually seems more in real life. It’s a result a bit below the P8 Lite’s 82.9 dBA, but above the OnePlus 2 and below the P9’s 83.9 dBA. The headphones are typical for Huawei, with a big remote and a bit too big for the average ear, so they’re not comfy.

This set of headphones offers a loud and clear experience, good bass, nice voice and good isolation. There’s SWS amplifying and bass, as well. FM radio is here and I can say that acoustics were good on this model. Time to see what the camera offers here! At the back there’s a 13 MP shooter, with a Sony IMX 214 sensor, F/2.0 aperture and this time there’s no dual camera, unlike the P9 and P9 Plus. 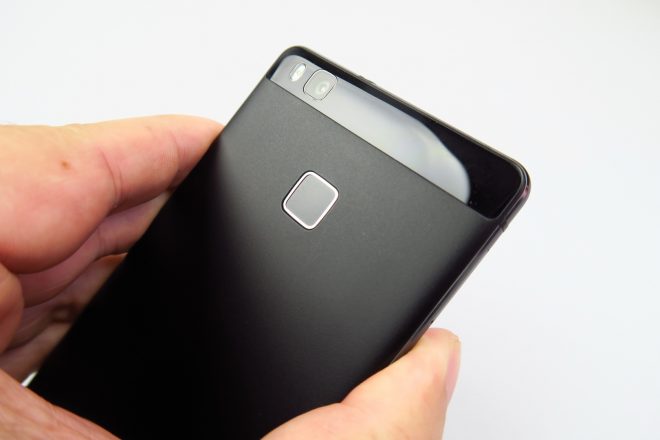 We get a big LED flash and the main sensor measures 1/3 inches and 1.12 micron pixels. Of course, there’s no optical image stabilization. Upfront Huawei integrated an 8 megapixel shooter for selfies, with F/2.0 aperture and 27 mm wide angle lens, as well as a “screen flash”. The camera app starts up slowly and offers fast focus, fluid zoom and fast picture taking.

The UI is quite simple and to the left we find the front camera shortcut, effects and if you swipe up you can trigger the modes: Beauty, Beauty Video, Panorama, Time Lapse, Watermark, Pro Photo, Pro Video, Night Shot, Light Painting, All Focus and Document Scan. There’s also HDR and Good Food, Slow Motion, Audio Note and if you trigger the Pro mode, you can trigger options like white balance, focus, exposure, shutter and ISO, as well as metering. Swiping down reveals options like resolution, GPS tag, grid, timer, voice control, smile capture, object tracking, saturation and contrast, as well as brightness. 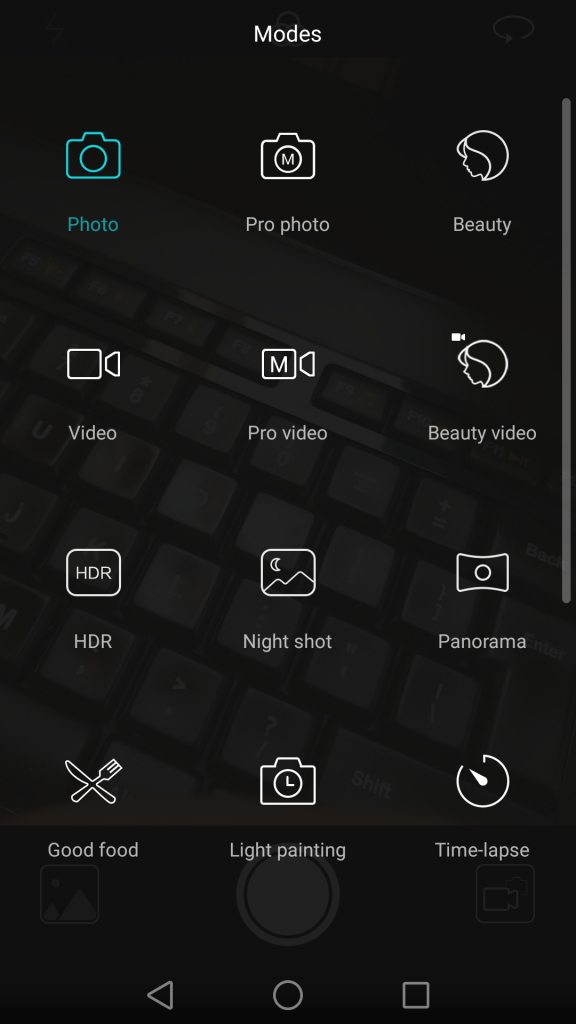 Video is only shot in Full HD at 30 FPS and with digital stabilization. We took a gallery of shots during the day time with this handset and it was done in Brasov, Romania, a beautiful city in the mountains. We had shots in the shade and motion at first, but those were unimpressive, but then we proceeded to achieve great closeups and nicely rendered clouds.

We have a nice statue texture on cam, realistic colors and we zoomed into the landscape shot a lot on the PC and still didn’t register any blur. The Good Food mode was great, but it feels like you’re applying a filter rather than doing some tweaks. I liked the texture of monuments photographed and didn’t register one blurred shot among the dozens we took.

Exposure was good and when zooming in there was a bit of quality zoom and I mean here zooming on the device, not after the shot. Panorama had a pretty OK resolution, at 16.704 x 2752 pixels and the selfies were clear and about the same quality as those taken with the Huawei P8 last year. We also caught very good flower closeups and did some nice focus play.

In the shade, in the woods, the camera kind of disappointed us and the HDR felt a bit artificial and over sharpened. I feel that this model has better colors, clarity than the predecessor, the Huawei P8 Lite and burns the torrid day time shots less. I’d place it on par with the Huawei P8 and above all the Honor models we’ve tested. 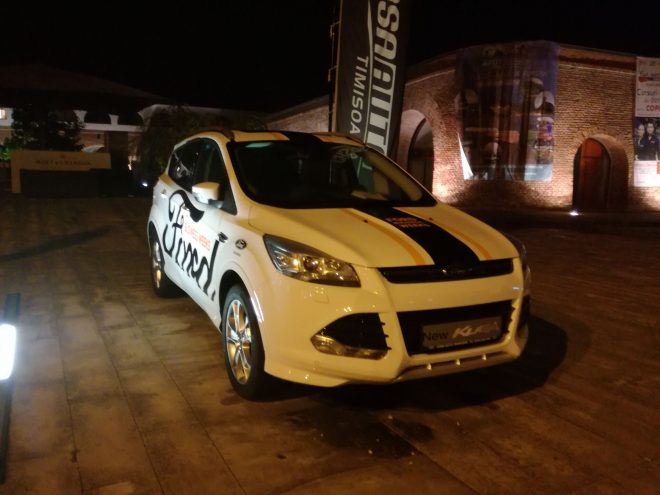 It can fight the Galaxy A 2016 models on equal terms. Low light capture was only OK and offered good clarity and colors, big light halos, plus a bit of yellow-ish hues. It’s not bad, but also not very special. I feel that the Galaxy A5 (2016) was superior here and the yellow tint is the main problem that this Huawei phone has at night.

Video capture was taken in MP4 format, in Full HD, at 30 FPS and at 18 Mbps bitrate. During the day the capture was shaky, clarity was OK and we got a good microphone, nice colors and good texture of all objects caught on cam. There was some strange rendering of the sky when the sun was high and we lost some details when zooming in.

The video capture is very poor in the shade and digital stabilization is rather weak. Having a glance at the P8 Lite captures from last year, I have to say that the P9 Lite does better when it comes to filming, but it’s clearly no champion when compared to the Galaxy A 2016 units. It’s also only slightly superior to the Honor models.

Low light video capture brought us a nice microphone, good clarity, but a lot of shakiness as well. Street light halos were big, the clarity was quite OK and everything was a bit yellow, like the photo capture. The preinstalled web browser here is Chrome and it’s pretty fast. It provides so-so benchmark results in the tests we did and the virtual keyboard is comfy, plus we have big keys and Swype support. 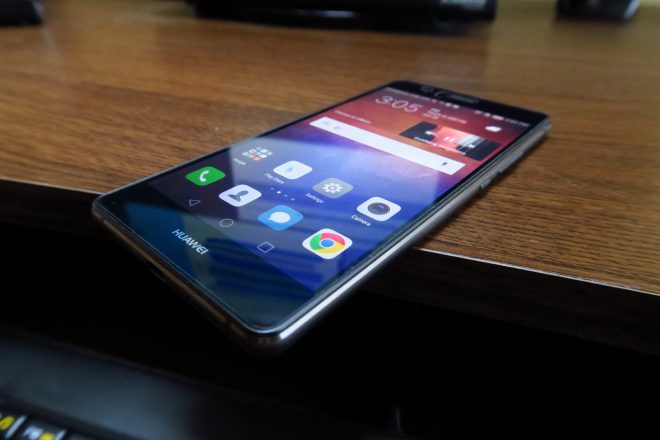 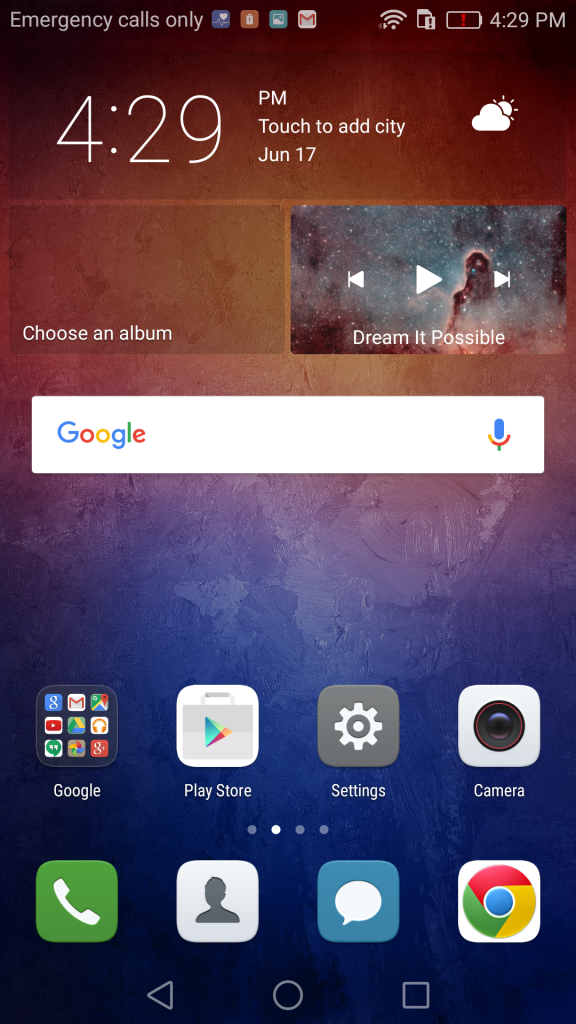 Huawei P9 Lite has the same UI and experience as the P9, running Android 6.0 Marshmallow with EMUI 4.1 on top. Icons have less vivid colors and there’s no app drawer here, so all the apps are on the homescreen. We have shortcuts in the lockscreen, like multimedia controls for example, calculator, torch and camera. Multitasking is offered as a horizontal line of thumbnails and once you pinch the homescreen you can access sections like wallpapers, widgets, transitions, layout and loop.

The dropdown portion includes notifications as a timeline, Quick Settings and speaking of Settings, there’s a Home Screen Style option here, fingerprint scanner option and Smart Assistance, with options related to the navigation bar and floating dock, as well as motion control. The fingerprint scanner has a fast setup and can be used to unlock the device (fast), take pictures, answer calls and stop an alarm. 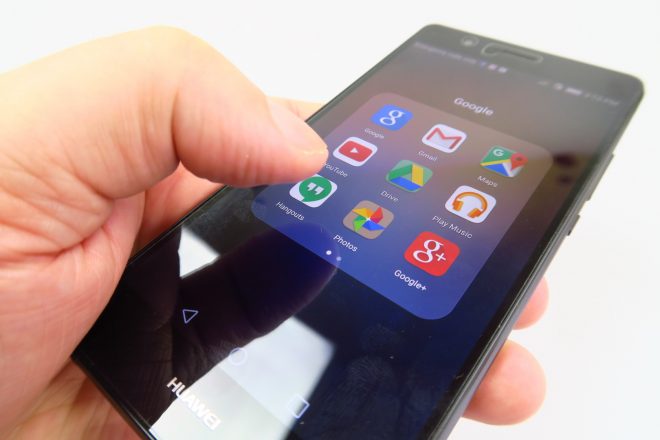 One hand UI, voice control, glove mode and Do Not Disturb are all here. The preinstalled apps list includes 49 names, so we’re dealing with bloatware. We get the usual customizable Themes, Phone Manager, Health, Tools, WPS Office. Now let’s see the verdict!

Huawei P9 Lite is a great follow up to a great P8 Lite and it will surely sell well. The main upgrades are the battery, display, camera, but still this is not exactly on par with the Galaxy A 2016, for example. It can fight it in the camera area, but the battery and screen are better on the Samsung model.

The advantage of the P9 Lite is its lower price compared to its rivals. This model could also works as a Huawei P8 replacement, not only P8 Lite, so that’s something to take into account. The updated price of the P9 Lite is here.