The guys of Mobilissimo.ro have just managed to score the full list of updates for all HTC devices in this beginning of 2012. One might think that the Android 4.0 Ice Cream Sandwich are included here, but apparently they aren’t, or maybe they’re disguised in all that “system language”. People in the know, have a look at this: 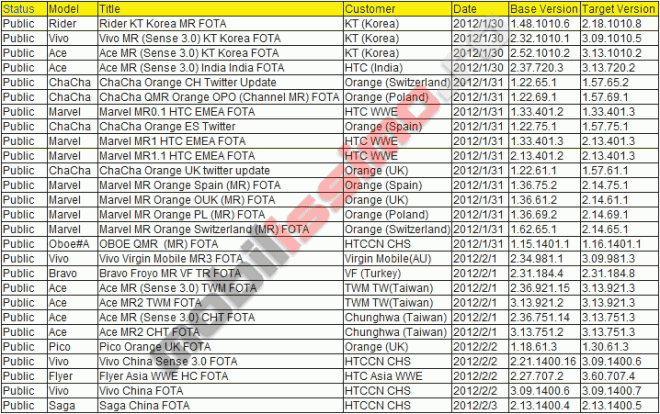 The list includes handsets such as the HTC Kingdom, HTC Incredible S, HTC Desire HD, HTC Wildfire S and these are only a few. Among the carriers mentioned there’s Virgin Mobile, Orange, Chunghwa from Taiwan and a couple more. Right here in this article (below) you have the full list of all the devices that were included in the leak and I’m pretty sure that the list refers to Android ICS updates. Last  I heard these were coming to the Sensation models in March. Let’s just hope that the updates won’t be delayed, as it usually happens.

Meanwhile, I have to remind you that the HTC Desire S, Incredible S, Desire HD and HTC EVO 3D will also receive Android 4.0 as an update, but later on. Till now only these devices have been upgraded to the latest Android: ASUS Transformer Prime, Motorola Xoom, Nexus S and Huawei Honor (apparently).