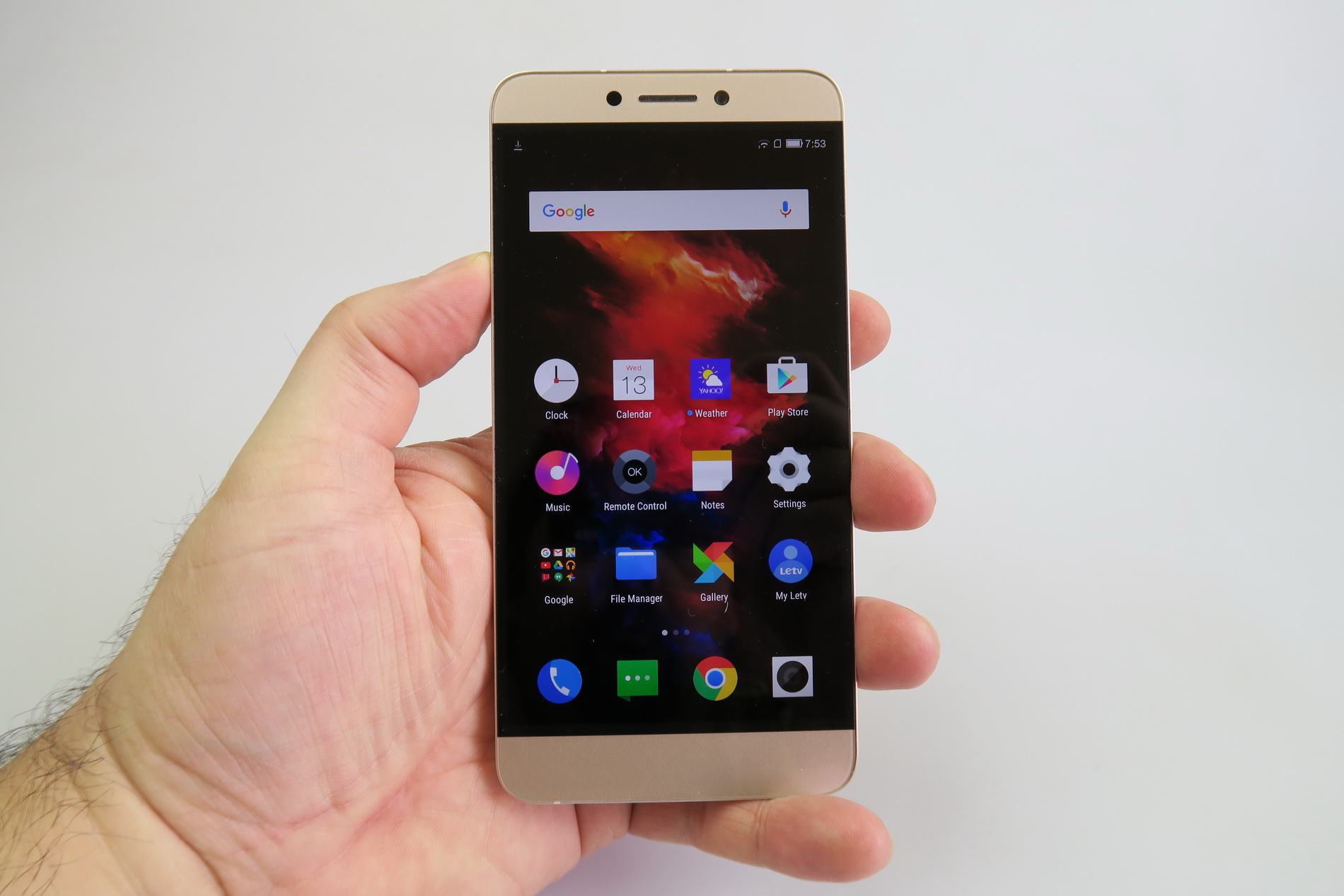 In spite of LeTV being rebranded to LeEco, we still tend to call the company by its older name, not that there’s anything wrong with that. Anyway, the LeTV 1S is the very first handset from this brand we tested and it was launched in the fall of 2015, as the fourth phone made by the company. Priced at around $230, this model is analyzed in detail after the break. 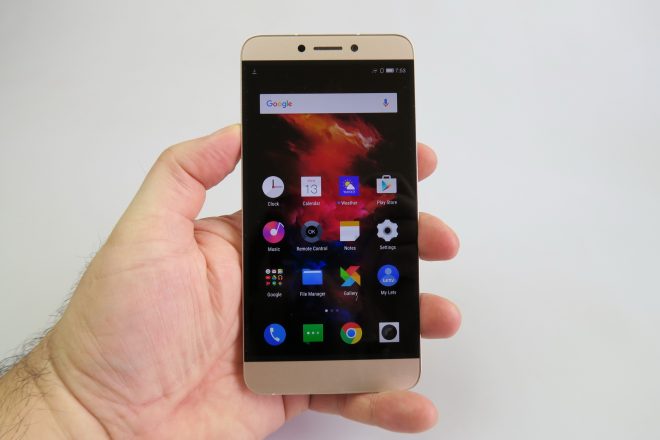 The design reminds me of the Coolpad Modena, not exactly a compliment, to be honest. There’s an edge to edge illusion here in the screen department and the phone measures 7.5 mm in thickness, plus it weighs 169 grams. This means, it’s slimmer than the Coolpad Modena (8.6 mm), but it’s also heavier by 11 grams. This is a 5.5 incher and it feels hefty, but solid, providing a good grip and feel.

It has a good build, it’s made of aluminum and comes with an unibody design. There are two plastic strips here, at the top and bottom of the back used for the sake of antenna integration. LeTV 1S is quite a long phone, so it’s not very easy to use with a single hand. It has rounded corners and comes in gold or silver, with a solid build, but one thing’s for sure: it won’t win beauty contests. 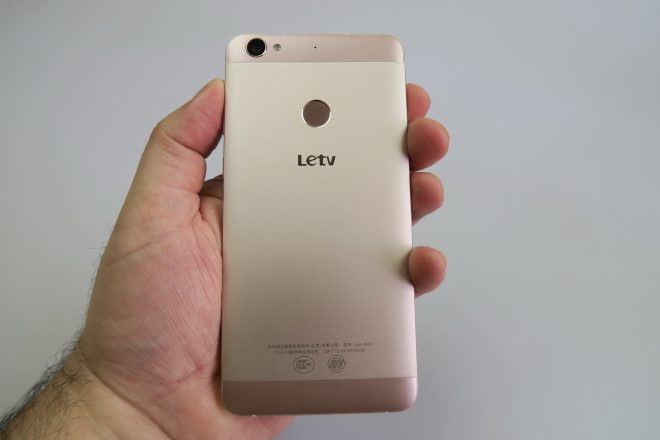 The hardware includes a 5.5 inch Full HD screen, with an IPS LCD panel and Gorilla Glass 3 protection. On paper we get 500 nits of brightness, but in reality quite a bit less. The video player included by LeTV is simple and includes a screenshot function, Pop Up Play style functionality, caption settings and the option to pinch to zoom.

I like the player UI, that’s a bit atypical and very minimal. The viewing experience brought us a tad of oversaturation, wide view angles, poor contrast in the sunlight and a clear image in general. Pixels are of the RGB Stripes variety and the brightness we measured indoors reached 297 LUX, while outdoor it was 348 LUX, both not very impressive. 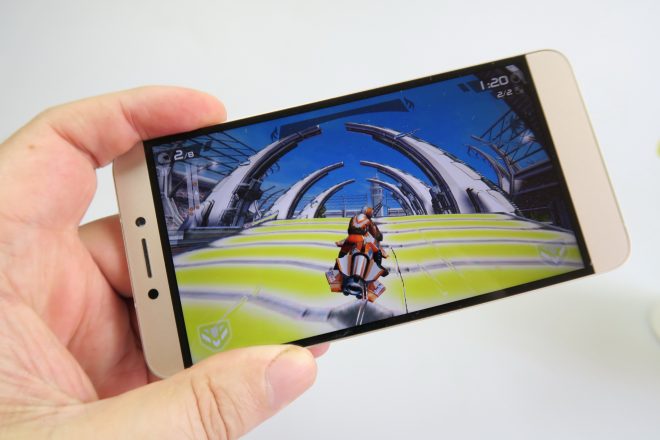 This score places us below the Samsung Galaxy A5 and ASUS ZenFone units. Settings include brightness, Color Mode (LeTV, Vivid, Natural, Soft), plus Scale View (Standard or Zoom). There’s also a video display enhance feature, with features like extra, smooth and saturated, so there are plenty of tweaks for video watching, which makes sense since LeTV is a video company first, then a phone maker. Visit best amazon review via online.

Finally you can tweak the font and LED usage. Overall, the screen is rather mediocre in my book. Moving on to the hardware, we get a MediaTek Helio X10 processor, an octa core unit clocked at up to 2.2 GHz, with a PowerVR G6200 GPU, the same one from the Xperia M5 actually. There’s 3 GB of RAM included, 16 or 32 GB of storage and no microSD. 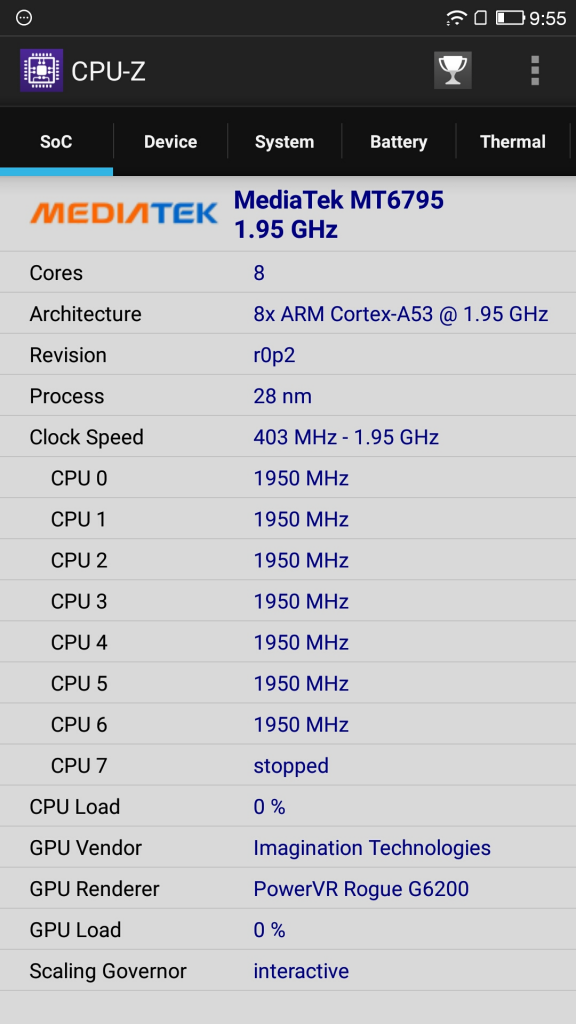 The device has a fluid functioning, no lag and good performance. Games run OK, including Plants versus Zombies Heroes and Riptide GP2. In benchmarks we scored past the Sony Xperia M5, that has the same amount of RAM and CPU, while in GeekBench 3, 3DMark and Quadrant we also beat the same Sony model. We gravitated around the values of HTC One A9 and ASUS ZenFone in benchmarks, being above or below them in the tests.

Temperature-wise, we got to 40.1 degrees Celsius, after playing 15 minutes of Riptide GP2, so that’s at the limit of overheating. However, after playing Plants vs Zombies for a few minutes, the device got really, really hot and even bothersome, so that’s real overheating. Now let’s talk acoustics. The music player included here is fancy looking, but it simply didn’t manage to detect my tracks. 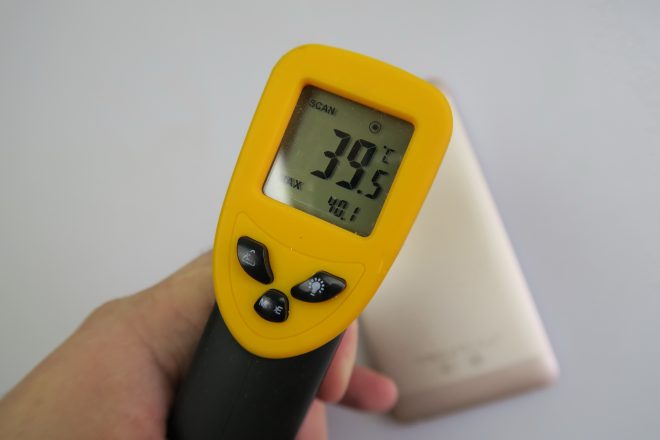 We had to use Play Music, with its stock equalizer, that includes 5 channels, bass boost and surround sound. The acoustic experience brought on a loud volume, crisp and clear sound, no distortion, good bass and good keys. The speaker seems to cover a conversation in a small room. There are no bundled headphones or FM radio here. We used a decibelmeter to measure the power of speakers and got up to 83.6 dBA, which is good. 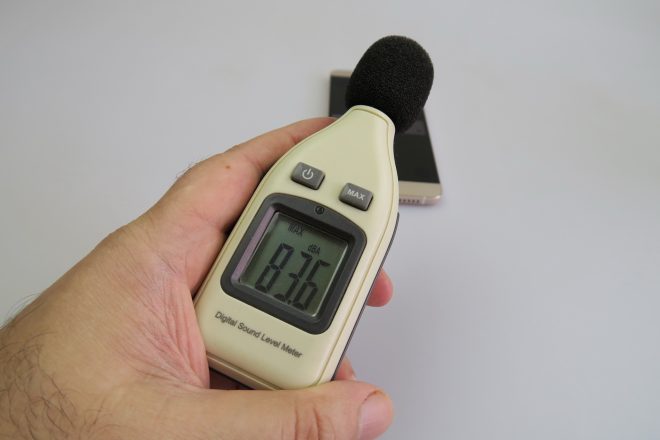 It surpasses the result of the iPhone SE and OnePlus2, but scores below the Sony Xperia Z3. On the camera front, there’s a 13 MP back shooter, with F/2.0 aperture and LED flash, plus ISOCELL sensor and PDAF. This one is a 1/3.1 inch size and the selfie camera is a 5 MP shooter with F/2.0 aperture, 85 degree wide angle lens. 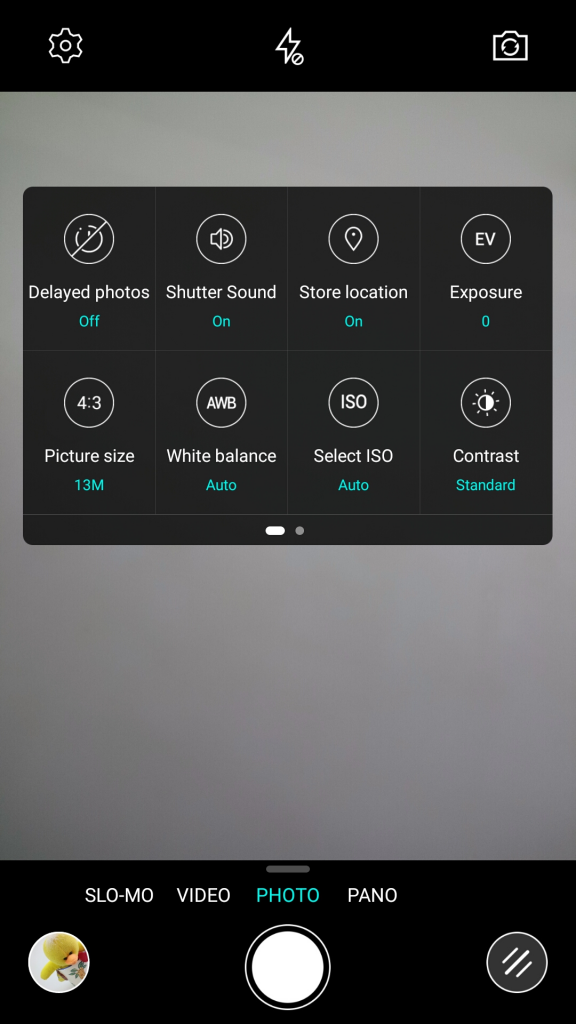 The camera app starts up pretty fast and it’s hugely minimal, UI-wise. We get only filters and basic modes like Panorama, Photo, Video and Slow Mo. The options include exposure, picture size (4:3 13 MP or 16:9 10 MP), white balance, ISO, contrast, sharpness and saturation. You can film in Full HD or 4K and in the side menu we can also find other options like Scene, Square, Night and HDR.

The focus was rather slow here, but the picture taking was fast and zoom was fluid. We took a gallery of day time shots on a very sunny April afternoon, which resulted in some burn pictures. Brightness is quite good and the colors felt a bit washed out. Panorama was modest, with a resolution of 7840 x 1728 pixels, but the selfies were OK considering the price. 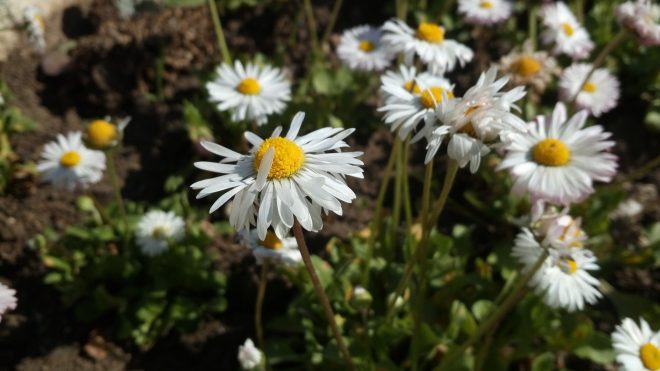 I noticed a very nice flower closeup or two and a great texture of the statue we captured. In the shade the camera tends to fare better color-wise and the details looked great in landscape shots. We zoomed in a lot on a building’s logo and noticed that the details still looked great. HDR was nice, eliminating the sun burn and overall I feel that the quality was good for 13 megapixels and pretty much at the same level with the ASUS ZenFone 2 Laser or the Huawei Honor 6. 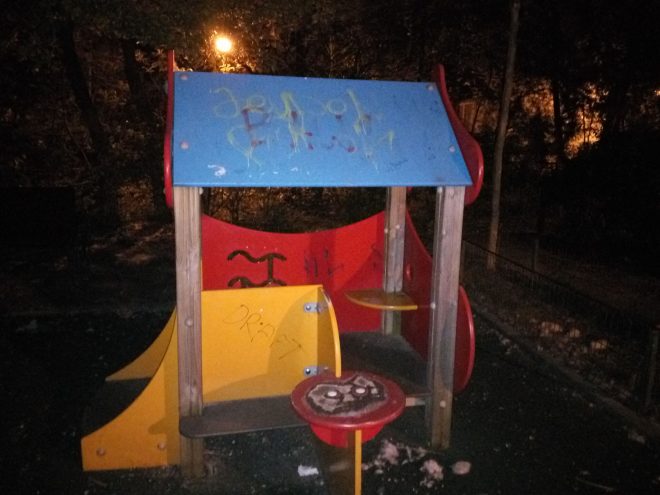 Night time capture was fuzzy, registered big halos and OK colors, but without flash images were moved and dark. Closeups were good and you’ll need patience to focus in order to get some good shots and also the flash on. It’s certainly no top 10 material. Now as far as video goes, we filmed in Full HD, at 30 FPS and 17 Mbps bitrate.

The video capture was in MP4 format and the 4K capture had a bitrate of 44 Mbps. The clips were a bit shaky, but the camera faced the su pretty OK. There’s no focus loss, colors are OK and the slow mo capture was underwhelming, in 3GPP and not looking good. The acoustics were muffled, but the 4K video capture remains great. It’s clear and crisp, but the sky looks a bit artificial.

Low light filming was reasonable with flash, but dark without. It’s above the Huawei Honor models, but below the LG Nexus 5X. The web browser preinstalled here is the CM Browser, with OK speed and the option to check for malware all the sites. There’s also a stock keyboard in the mix and we got mediocre benchmark results in Chrome.

On the connectivity front, there’s a dual SIM setup here, with one nano SIM and one micro SIM slot. We also get Bluetooth 4.1, 4G LTE, GPS, WiFi 802.11 b/g/n/ac, Glonass, USB Type C and infrared. Calls were OK, but not very loud. At least the sound was clear and the mic was so so. We did a SpeedTest via WiFi and achieved 24 Mbps download speed and 20 Mbps upload. 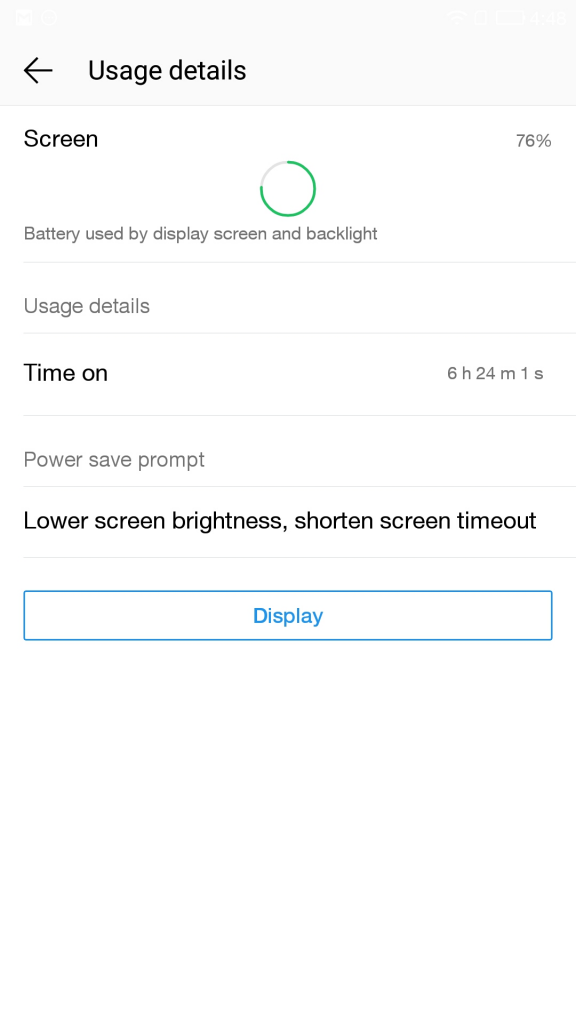 Now let’s talk about the battery! LeTV 1S has a 3000 mAh unit (Li Po), that offered us a very modest 6 hours and 24 minutes of video playback, which is very poor and below the modest Amazon Fire Phone and Xperia E4. At least we beat the HTC One M9. In PCMark we got to 5 hours and 3 minutes, not impressive and below the LG G4, ASUS ZenFone 2 and Coolpad Modena. Once again we surpassed the HTC One M9.

Charging is done in 1 hour and 31 minutes, which is top 10 material and beats the likes of Galaxy Note 4 and Galaxy S7 Edge. Settings for the battery include options to shut down apps not in use and there’s also the Battery Assistant, with Smart Power Saving features. You can control the sync, vibration and more such features, plus there’s also a Super Power Save option that totally limits the network access and visual effects. 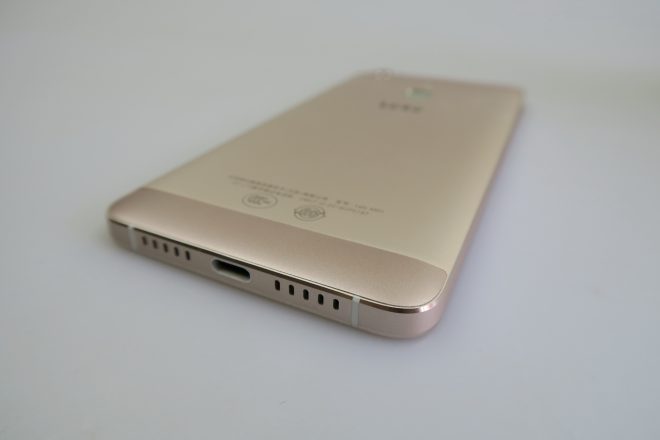 Ultra Long Standby is included as a battery mode, letting you only call and send messages. Overall, battery remains a letdown. When it comes to OS and UI, we’re dealing with a smartphone that runs Android 5.0.2 with EUI 5.5 on top and there’s no app drawer here. There are some nice looking icons in the mix, inspired by MIUI a bit.

Keeping the homescreen pressed we get to the widgets, themes and wallpapers. The dropdown portion includes notifications, while Quick Settings has been moved to the Recents screen, that’s actually very complex. It includes app shortcuts, the music player, Quick Settings, small thumbnails for apps, being very crowded. 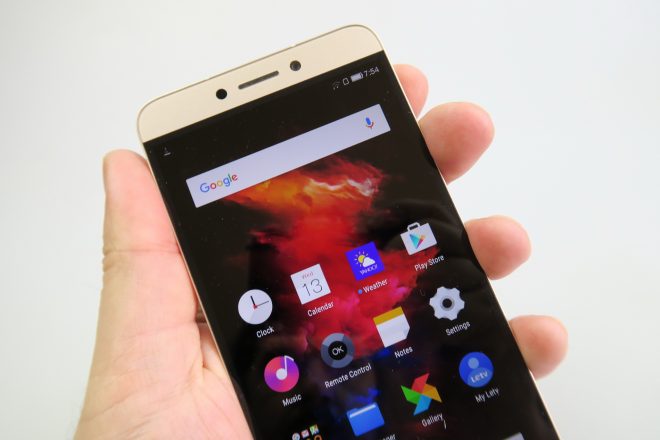 This UI uses a brand new font, rarely seen nowadays on these devices. Settings include options for LeCloud and fingerprint scanner, that unlocks the device fast and lets you take pictures and perform other commands. The preinstalled apps list features 38 apps, which is an OK number and certainly no bloatware. We’ve got a remote control app, that lets you control a TV set, CleanMaster, CM Browser and CM Security.

Software-wise it’s all very barebones and I don’t like that the device is stuck at Lollipop. 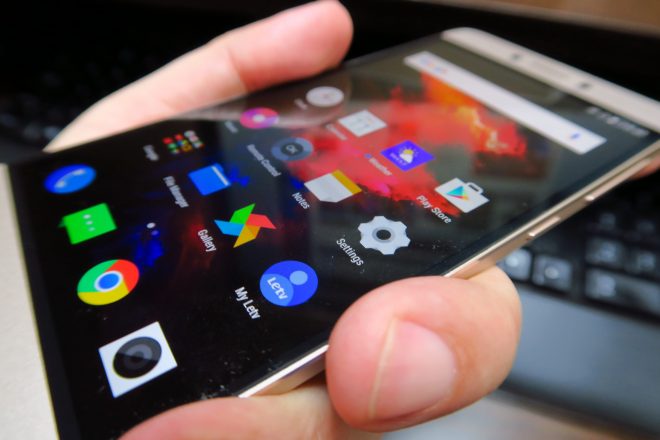 Now here’s the Verdict, with the Pros and Cons first.

LeTV 1S is a phone that knows what it is, sold at a loss by LeTV. They can still experiment and evolve and they afford to let some shortcomings slip through the cracks. This model feels like a HTC One A9 combined with an ASUS ZenFone 2 Laser, minus the laser focus, all of that bundled with the looks of the CoolPad Modena.

Too bad for the display and battery, but the performance, camera and lack of lag are quite good here. The updated price is here.