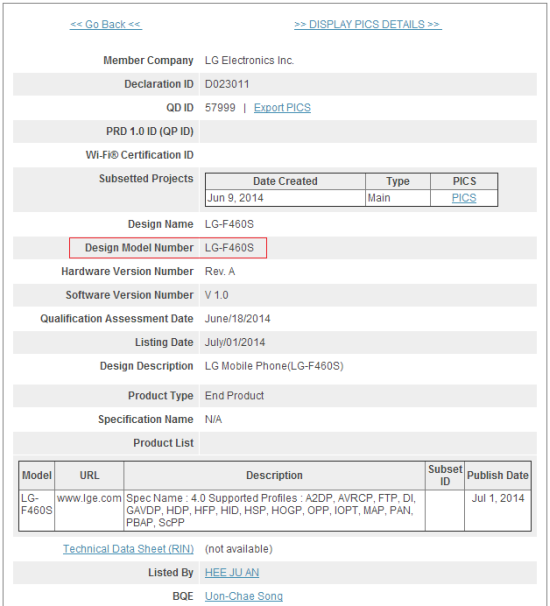 For a while we believe there wasn’t going to be a LG G3 Prime, because the G3 is already filled with innovations and high specced as is, so there’s no need for a superior model. It appears that this model actually exists and now we’ve got a leak to confirm it.

LG is working on a new flagship in spite of the fact the G3 is not even in stores yet. This mysterious new model has just been certified for Bluetooth use by the dedicated authority. The Bluetooth SIG database has recently added a new LG model going as LG-F460S. We were wondering why this codename is actually liked to the G3 Prime and it appears that this isn’t the first time such a device appears in this circumstance.

A few weeks ago, the very same F460L has appeared in an Android OS .prop file and the codename Tiger. The handset packs a Snapdragon 805 processor, Adreno 420 graphics and a Qualcomm MDM9635 modem, that allows you to reach download speeds of 225 Mbps. The same device has been spotted on the Bluetooth website, so it appears things are moving pretty fast. These models are not exactly similar, since there’s an S particle for one and an L particle for the other, associated to the South Korean LG U+ carrier and SK Telecom respectively.