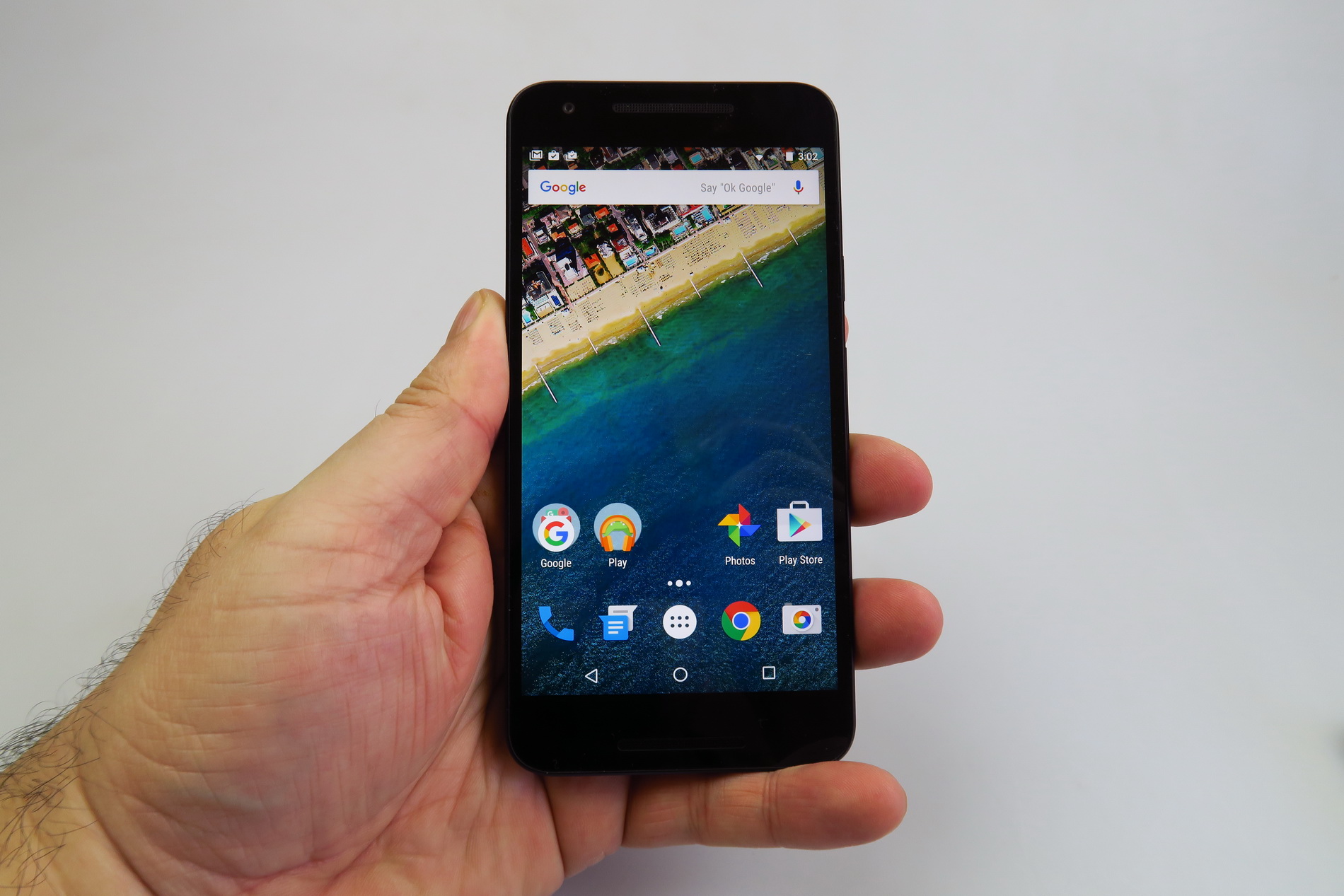 We reviewed the Huawei Nexus 6P handset a while ago and found some of its aspects excellent, particularly the camera, so we were curious how the secondary Marshmallow flagship held up. That’s the LG Nexus 5X, launched last fall with the Nexus 6P and Android 6.0. Priced at $337 on Amazon, the product is the third LG Nexus handset, so LG has some experience in the field. 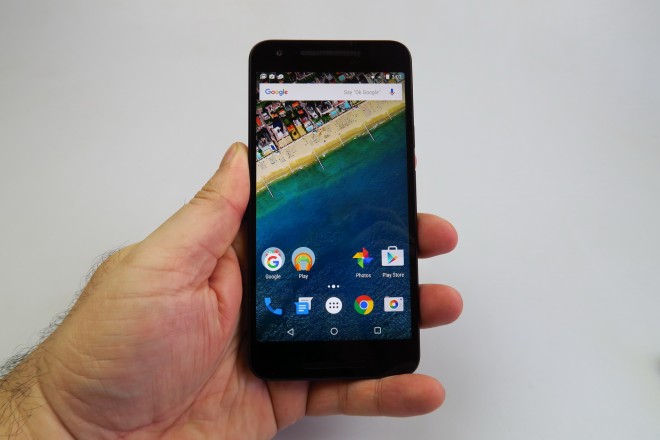 The design is comfy and light and the smartphone measures 7.9 mm in thickness, plus it weighs 136 grams. This makes it thicker than the HTC One A9 (7.3 mm), but also lighter considering that the A9 weighs 143 grams. At the same time the Nexus 5X measures 0.7 mm less than the Nexus 5 in waistline and weighs 6 grams more.

The format is similar to the one of the Nexus 5, but a tad more refined. The device is made of plastic and has a soft touch back, that tends to absorb grease and fingerprints. One hand usage is not very easy, since this is a long phone, even for its smaller diagonal, compared to phablets. There’s also a camera bulk that stands out a bit. 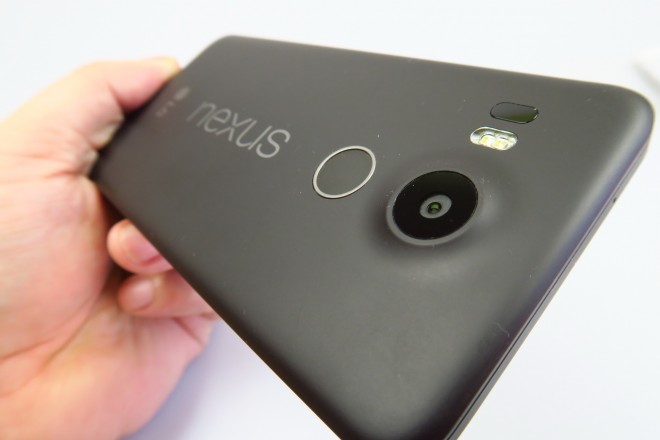 The design feels pretty standard, without an unique personality and the buttons are clicky and have a cheap feel to them. The build is OK and I’d call this an utilitary design. Moving on to hardware, the phone provides an IPS LCD 5.2 inch Full HD screen and there’s no video player to test the screen. That’s why we used the Photos app for video playback.

The viewing experience involved an OK brightness, so so viewing angles and accurate colors and the image was crisp. Contrast was OK, but view angles weren’t anything special. Pixels are of the RGB Stripe variety and we used the luxmeter and measured 410 LUX, which is a good result, but I’ve seen many phones better than that. 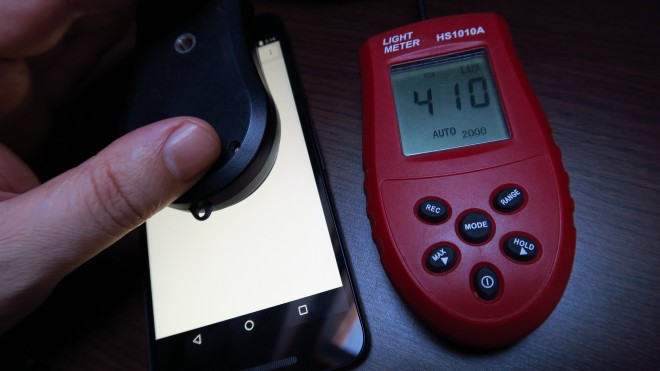 This is also not a very big increase from the Nexus 5’s 400 LUX and places below the Nexus 6P’s 505 LUX. The Setings of the display include Adaptive Brightness and Ambient Display, that wakes up the screen in a dimmed manner when you pick up. In that mode it shows notifications and info on the screen. Honestly speaking, I wanted more brightness.

Hardware also includes a Qualcomm Snapdragon 808 hexa core processor, the same one from the LG G4 handset and the Lenovo Vibe X3. There’s also 2 GB of LPDDR3 RAM in the mix, 16 or 32 GB of storage and obviously no microSD card slot. The handset doesn’t suffer from lag and has great performance. LG Nexus 5X handles gaming in an excellent way and it’s quite future proof in that aspect. 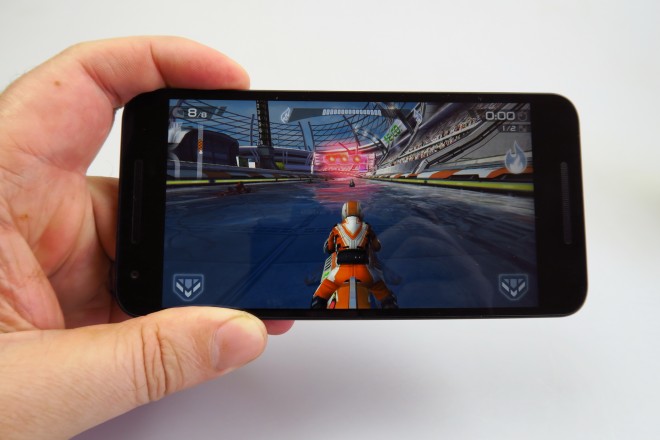 In benchmarks we surpassed the LG G4 in Quadrant and the HTC One A9 in AnTuTu 6. In GeekBench 3 we had pretty much the same results as the Lenovo Vibe X3 and surprisingly we beat the Huawei Mate 8 in 3DMark. We played the game Shine Runner, that can easily be used as benchmark and it worked out just fine. We tested the temperature of the phone and got ot 38.6 degrees Celsius after playing 15 minutes of the game Riptide GP2, so there’s no overheating. 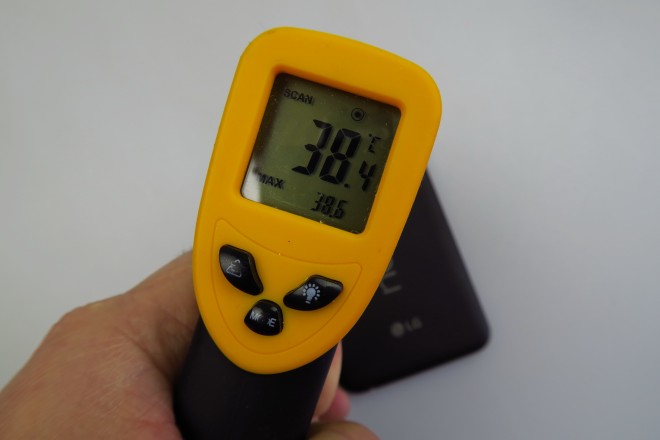 We also lent our ear to the device to test the acoustics. Keep in mind there are no headphones bundled here and in theory we have two speakers upfront. In reality one serves as the earpiece and the other as the speaker for music listening, the one at the bottom. We also found out that thanks to a workaround, both can be used for music playback, apparently.

The standard music player we used was Play Music, with its stock equalizer and 5 channel customizations, as well as surround functionality. The experience involves a loud sound, good clarity, good bass and guitar, plus a nice sound overall. We used a decibelmeter to measure the strength of the sound and got to 83.8 dBA, at both the back and front. 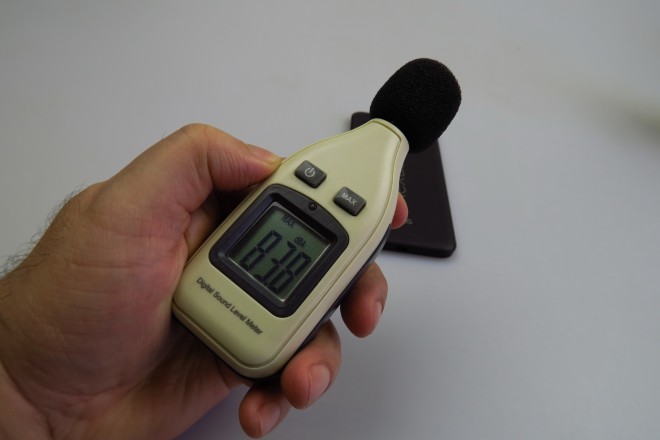 That’s a good result, that makes us beat the HTC One A9 and puts us on par with the iPhone 6 Plus. Now as far as the camera goes, there’s a 12.3 MP unit at the back, with F/2.0 aperture and 1.55 micron pixels. This sensor is made by Sony, measures 1/2.3 inches and also comes with a dual LED flash and a laser focus. Keep in mind that the Nexus 5 had OIS, but this model doesn’t.

The front camera is a 5 MP unit with F/2.0 aperture and 1.4 micron pixels. The Camera app starts very fast and focuses fast, too. The picture taking speed is simply incredible, most likely courtesy of Android Marshmallow, since we also had great photo capture speed on the Nexus 6P. Zoom is fluid, too. The UI of the camera app is very barebone and we’ve got the usual options: Photo Sphere, Panorama, Lens Blur, 4K video capture and 120 FPS slow motion. 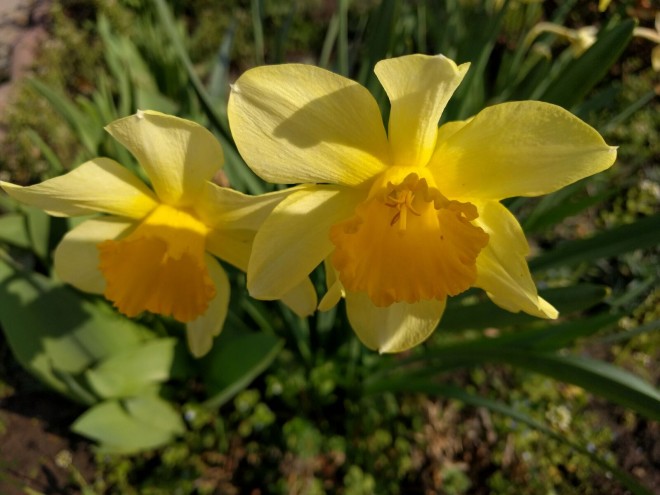 There’s also HDR+ and the resolution can be set up to 12.2 MP in 4:3 and 8.3 MP in 16:9. The gallery of shots taken with this smartphone was done on a cloudy day, that had some patches of sun. HDR was OK and the shots were crisp and clear in general. From the 100+ photos we didn’t have one blurred image, which is excellent.

We zoomed in at a max level on that colorful flag shot and Lens Blur provided great focus. We played with focus in the foreground and background, to great results. Nexus 5X is able to capture clouds and the sky in a very realistic manner, even compared to the flagship bigshots. I have to say that this handset takes some of the best HDRs I’ve seen.

Shades of blue looked excellent and even the selfies had good quality. The details were great for a 12 megapixel camera and even when we zoomed into a landscape shot, this applied. We’d place the quality of the captures on par with the Nexus 6P and iPhone 6s, which is great for the price tag mentioned above. The panorama is quite wide and has a generous resolution: 13824 x 1820 pixels. 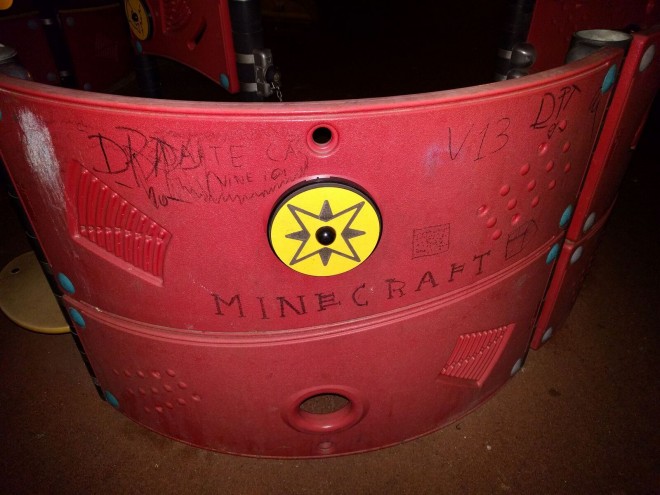 Details were great, once again and when it comes to zoom in this model even feels like it captures more details than the Galaxy S7 Edge. In low light conditions, the LG Nexus 5X showed its real face, which is that of a real night owl. We had fantastic brightness, great colors and excellent indoor shots first.

Then we took some photos at night and achieved perfect results. The flash was bright and everything was clear and crisp, reminding us of the excellent Huawei Mate 8, that’s considered a low light landmark right now. Both closeups and landscape pics in low light were magnificent. This is certainly a top 3 low light capture phones among all the models we’ve tested.

Video capture was done in MP4 format, in Full HD, at 30 FPS and with a bitrate of 17 MBps. The 4K clip had a bitrate of 42 Mbps. Videos were crisp, clear and had good colors, plus good exposure. The microphones handled wind OK and when zooming in, there was no big quality drop. The clips did look a bit shaky and stabilization clearly lacked.

Slow motion looked nice and even the low light filming was pure quality. I’d even say the videos were great and this smartphone can compete with any flagship when it comes to video capture, even though it lacks stabilization. Now it’s time to talk about other aspects, aside from the camera. For example the web browser of choice here was Chrome, that’s fast and achieves great benchmarks like Vellamo, BrowserMark and Sunspider. 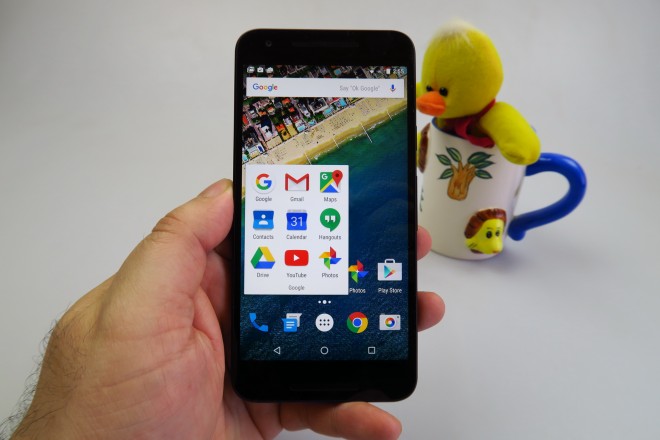 The virtual keyboard was comfy and well spaced, the stock Marshmallow one that is. We now discuss connectivity. There’s 4G LTE here, obviously, as well as USB Type C and Bluetooth 4.2. We’ve also got WiFi 802.11 a/b/g/n/ac dual band and GPS, plus Glonass and NFC. There’s a nano SIM card slot in the mix and sadly calls were not very loud, but the signal was OK And clarity was also nice.

The WiFi speed test revealed a download speed of 26 Mbps and upload speed was 30 Mbps. The battery has a 2700 mAh capacity and it’s a Li-Po unit, an upgrade from the 2300 mAh one of the Nexus 5. We did a video playback test and achieved 8 hours and 3 minutes, which is an OK value. We beat the ASUS ZenFone 2 and we were pretty much on part with the Huawei Mate S. 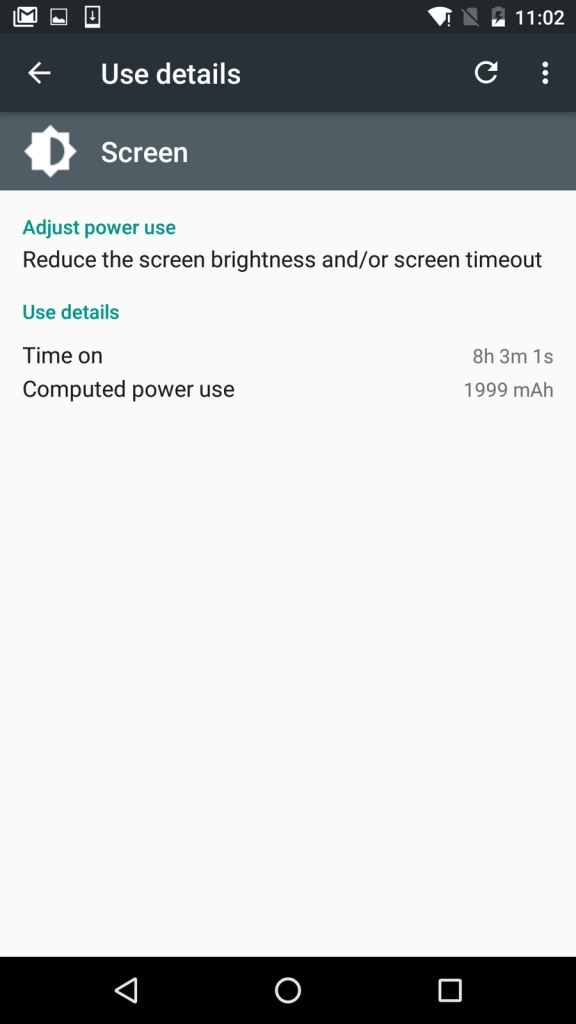 In PCMark, the continuous usage test, we reached 6 hours and 25 minutes, which is quite OK. We surpassed the HTC One A9 and Huawei P8, meaning we’re doing fine in the midrange area. Charging takes 1 hour and 50 minutes, great considering we’re using a USB Type C cable and charger. In the Settings area we find the usual options, like Battery Saver, Battery Optimization, which is basically the option letting you tweak Doze.

On the software front, we have Android 6.0.1 Marshmallow, in pure stock version. The UI is very fluid and fast and we’ve got nice looking widgets. Multitasking is still in carousel format and the dropdown bit includes Quick Settings and notifications. The fingerprint scanner is fast and accurate and its setup was also fast. 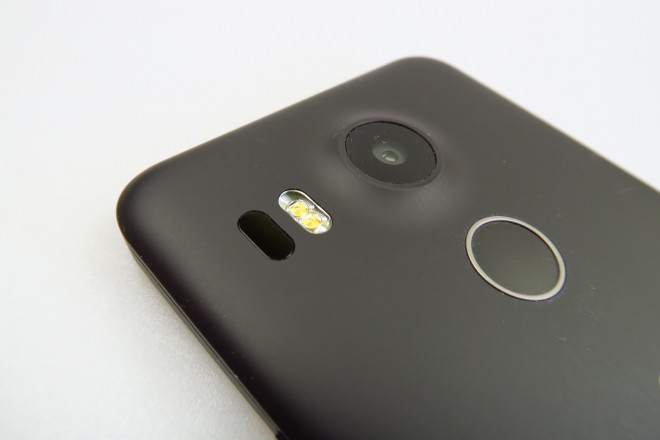 The permission management is improved in Marshmallow and we’ve also got Android Pay, Google Now on Tap and the app drawer has a white background, plus the 4 most used apps at the top. Pure Android means no bloatware, so we have 27 apps preinstalled, which is quite reasonable. Now it’s time for the verdict.

Overall, this is a solid phone, perhaps the best midranger LG has ever produced and at $300 bucks you get your money’s worth for sure. It’s both future proof and has a solid performance, plus a flawless camera. Some compromises were made to reach the current price, but they’re all compromises we can live with.  You can find the updated price here.