Motorola’s official website reveals what preloaded apps we’ll be getting on the Moto CLIQ Android phone and the list includes cool stuff, like Digg, Telenav and Mint. Telenav Navigator is a turn-by-turn navigation app, that’s available for purchase via Android Market right now and can be considered a rival to VZNavigator and Sprint Navigator. 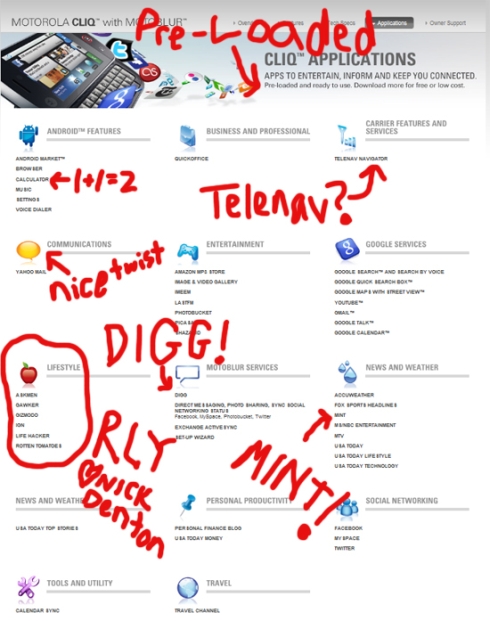 Mint is a desktop software, allowing the user to keep track of finances, just like Quicken.com, while DIGG is an official Digg Android application. Yahoo Mail is also on the list of preloaded CLIQ software, plus there are also 6 lifestyle apps to mess with: AskMen, Gawker, Gizmodo, IGN, Life Hacker and Rotten Tomatoes.

What’s really bizarre is that the European version of Moto CLIQ, DEXT doesn’t seem to feature some of the above-mentioned preloaded apps, or at least they’re not mentioned on DEXT’s official web page.