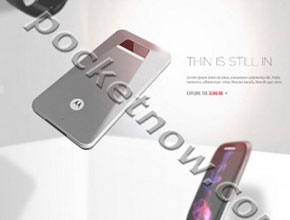 A recent set of EXIF data showed that a certain Motorola Droid RAZR has been taking pics…  or so says Pocketnow. That’s mind boggling enough to make it to the news and courtesy of Pocketnow we now know that two of the most famous brands in Moto’s portofolio might unite.

RAZR was the top of trends when it appeared, with ultraslim elegant models making and breaking fashion. Meanwhile, Droid was the spearhead of Android models throughout the past years. Combine these two and we finally have some class and fashion thrown into the Android universe. I really can’t name an extremely slim device that’s not too wide, bulky or has some other design flaw.

I wonder if Moto is willing to play the card of the Asian-style design and create a flip phone with great camera, slim design and the latest Android… We all know that flip phones are very successful in Asia, so this Droid RAZR could become a hit. Strangely enough the EXIF data from the RAZR’s photo showed a resolution of under 3MP, but that shouldn’t surprise anyone, since you can select lower resolutions even when using an 8 megapixel camera.