Home Android Motorola Google Shamu Phablet May In Fact be a Nexus 6; Leaked... 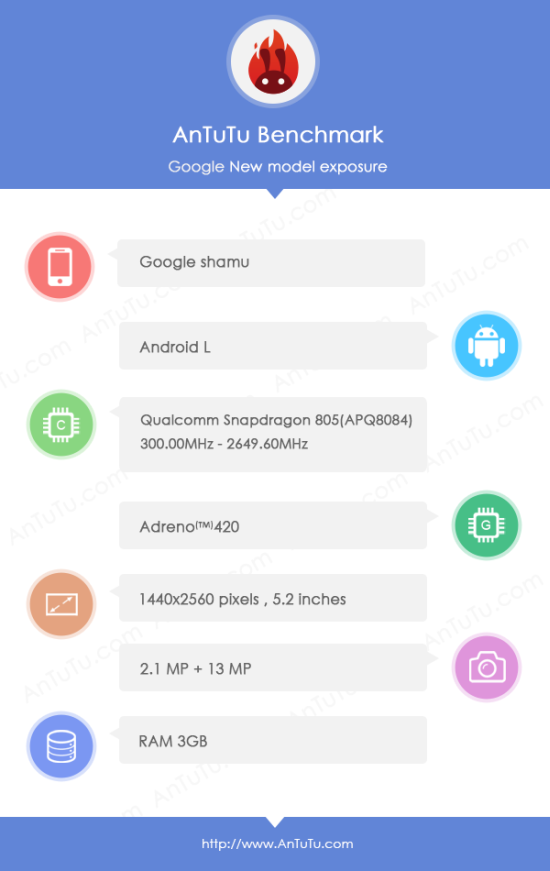 We’ve seen the Motorola Shamu device leaked on the web days ago, but without too many details about its identity. Today we learn, that this device may end up being the Nexus 6. Also known as Google Shamu, the product has first leaked via GFXBench.

Then it leaked via AnTuTu, as shown in the image above and it had its specs revealed. We’re dealing with a phone based on Android L, that adopts a Snapdragon 805 processor, Adreno 420 GPU and a 5.2 inch 2560 x 1440 pixel display. There’s a 13 megapixel camera at the back and a 2.1 MP front shooter, as well as 3 GB of RAM. This QHD smartphone has achieved some poor benchmarks in the initial tests, a sign that the benchmarks haven’t been optimized for Android L yet.

However, if we remember that the LG G3 LTE Cat 6 version scored poorly in tests, we might see the Snapdragon 805 as being closer to the Snapdragon 801 than we think. The real step up will be taken by a future 64 bit Snapdragon CPU. We expect the Motorola Shamu/Nexus 6 to debut sometime before the year is out, with an affordable price tag, rounded design and no microSD, if it’s really a Nexus.