When I first saw this device, I instantly remembered that back in the launch days of Motorola Droid RAZR, the device had a Chinese twin that packed a 13 megapixel camera and HD display. Now, a mysterious 720p Droid RAZR appears and it seems to be different from the Chinese version. 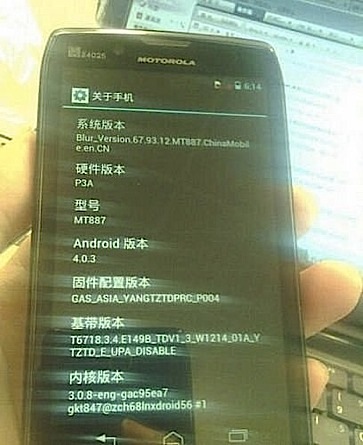 Meet the rumored Motorola RAZR HD, with Android 4.0 ICS on board and a previous leak last week. A week ago, a Motorola engineer posted some pics on his Picasa albums and their EXIF data showed that they were made with this phone. Now there’s more proof about the existence of the RAZR HD, that’s supposed to run Android 4.0.3 and use a 4.3 inch display with the above mentioned resolution. Other specs seem to be kept from the current RAZR units and the battery is apparently a 3,300 mAh unit like the one on the Droid RAZR MAXX.

The phone also looks a bit bulky, so it may not be 7.1 mm in thickness like the original model. I sure hope that the other specs have evolved as well, or else the upgrade wouldn’t be big enough to make people buy this phone, especially those who already own a variation of the RAZR.