We’ve entered the era of Facebook phones today, as Mark Zuckerberg stepped on the scene over at the Mobile World Congress HTC press conference. The Taiwanese phone maker launched two handsets oriented towards social networking, HTC ChaCha and HTC Salsa. We have someone in Barcelona, Zsolt Tamassy reporting for us and our sister site Mobilissimo.ro, so here’s the hands on fun you’ve been expecting:

HTC ChaCha is the front QWERTY model shown above, with an unique design that places the keyboard at an angle large enough for easy typing. As you can see both handsets sport a Facebook button, that will light up when you’re using the camera and allow you to post pics straight to Facebook.

HTC Salsa is a full touch smartphone and it comes with a 3.4 inch touchscreen. We also have to mention that the Facebook button allows you to share on Facebook the song you’re listening to or the website you’re browsing. Also, a long press will allow you to Check In and let everyone know where you are. It’s interesting that the version of Android on these units is not known yet, but the guy at the HTC booth thinks it’s Gingerbread. 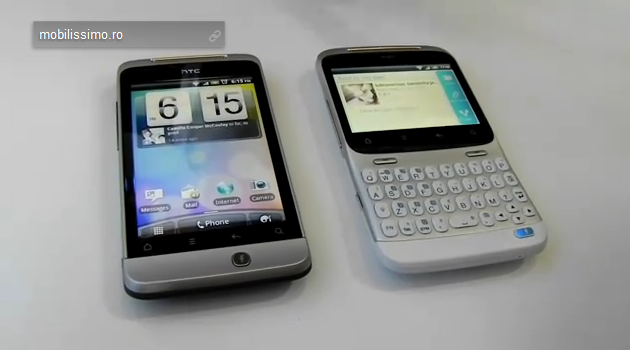