MWC 2012 isn’t all high end handsets and top notch tablets, but also a few niche devices that serve various purposes, such as aiding the elderly in their daily tasks. One such device is the Fujitsu Stylistic S01, pictured below and shown in action after the break. 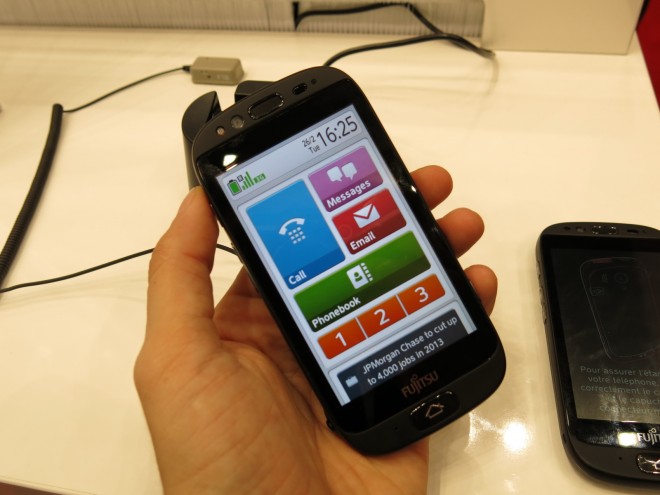 This is a phone for the elderly, as shown by the big buttons of its interface, thanks to a custom UI applied on top of Android 4.0 ICS. The menus of the phone are easy to read, even for people with poor eye sight and this device comes with a 1.4 GHz Snapdragon CPU and a 4 inch WVGA display. At the back we find an 8 megapixel camera and a pretty loud speaker. Various touch buttons with multiple colours make out the UI of the phone, covering Android 4.0 ICS.

The menus are optimized so they’ll be scrolled through vertically without issues and without having to be an expert. There’s also a special system, that may make the screen feel like somewhere in between a capacitive and resistive display. Once you press a button from the UI you won’t activate that function automatically, but you’ll first select the button and then with a prolonged press activate it.

There’s also a video below showing the phone submerged in water and still taking a call.