If you’re into racing games and Asphalt 7 was too arcade for you, there’s the freshly launched NFS Most Wanted to try, provided you have $6.99 to spend on the iOS version. We tested it on the iPhone 5 and came out very satisfied with the experience. The title takes up about 1.7 GB and it’s worth every penny you spend for it. 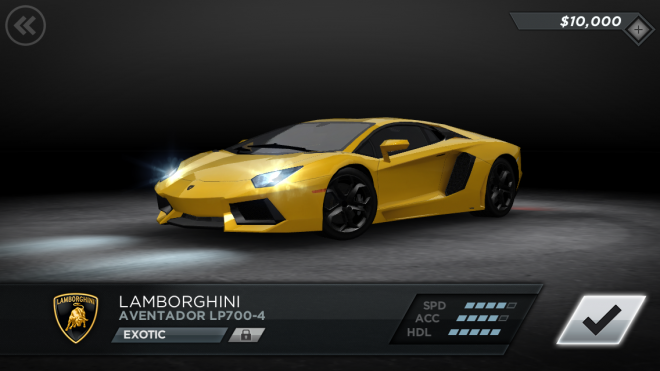 Launched on October 30th on the PS Vita, Android, PlayStation, PC and Xbox, this game also arrived on iOS and got a ton of downloads. It’s pushed to fame by Electronic Arts and it provides 35 unique cars to race with, including the Lamborghini Aventador, SRT Viper GTS, Porsche 911 Carrera and even a Hummer H1. You can either swipe the screen to the sides to steer your car or tilt the device, but I recommend the second, maybe with extra sensitivity, since you don’t want to tilt the handset too much. Sadly there are no customizations to apply to the supercars, aside from a paint job and some mods that are applied before the race.

Mods include faster Nitrous recharge, lighter chassis, resilience against spikes and a few more. Luckily cars also have visible damage, so you’ll see your fender dropping and your windshield cracking after a while. Usually you’ll take hits from the police cars, that will come in waves and torment you, particularly in races against time. There are 10 tracks to race on, but the variety is great, since you can race on them in both backward and forward mode and in different times of day (night, day).

There’s a map of a place called Fairhaven, where you do your racing and you have to choose between areas, classes of races, plus some “boss battles” with racers from the Most Wanted list. Your prizes are money, used to buy new cars and Speed Points, used to climb up the Most Wanted ladder. The speed sensation of the game is great, especially in nitrous mode and also great is the soundtrack, with cool songs from Green Day, Chemical Brothers and Skrillex available. We give the game a well deserved 9.5 out of 10 and you can download it from here.