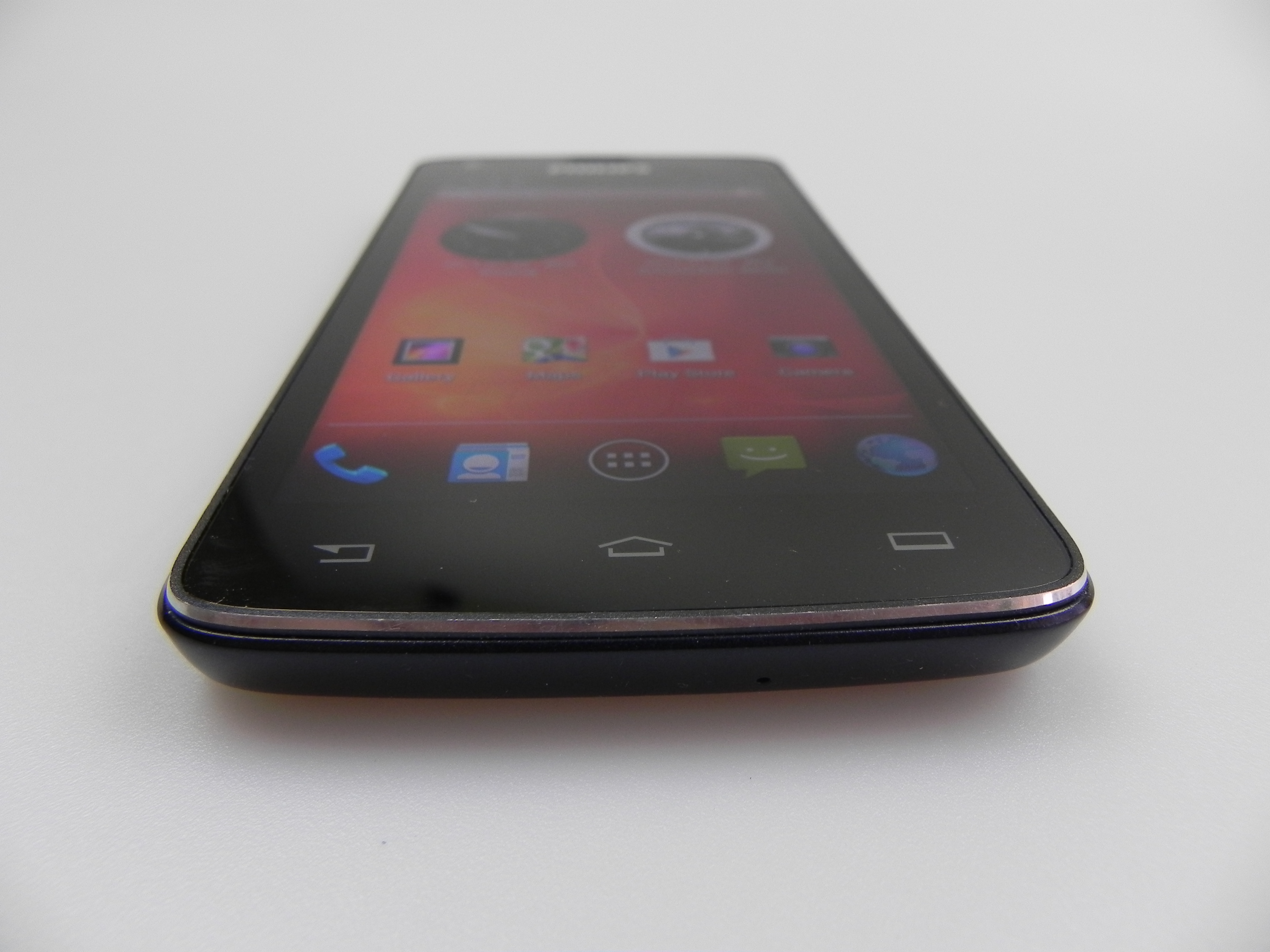 The brand Philips stands out through a series of handsets that have a big battery capacity and that’s pretty much their draw. Today we test the Philips Xenium W8510, a device launched last fall, that is a dual SIM unit with a big battery and a price tag of around $500 on eBay. This smartphone is pretty much a brick, it’s solid, massive and heavy, but it’s also well built. 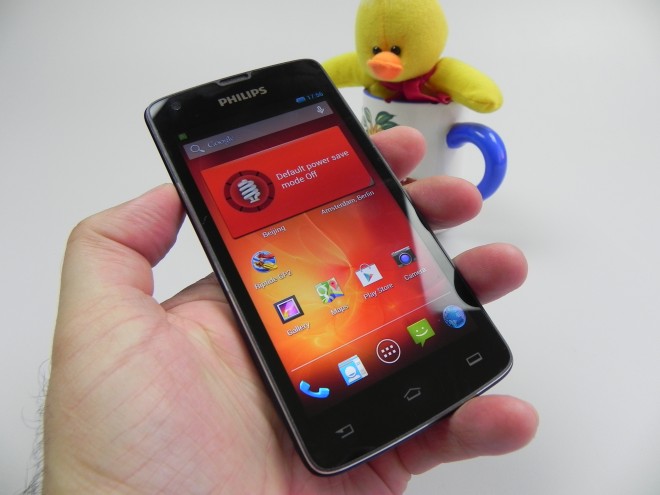 It measures 10.4 mm in thickness, weighs 173 grams and relies on a plastic case. It’s slightly rounded and it integrates an earpiece at the front, sensors, a front camera and capacitive buttons, too. At the back we find the main camera, LED flash, main speaker and a lid at the top, that covers up the two SIM slots and a microSD card slot. This device has at the top the audio jack, microUSB port and On/Off button, with the latter offering pretty weak feedback.

At the bottom we find a microphone and on the right there’s a metallic button with good feedback, while on the left there’s an unique Power Saving button. This model has a metal edge around the slightly elevated screen panel. We’re dealing with a solid and beefy design and if you want an ultraslim phone, well, this is not it. Sacrifices must be made for a big battery. As far as hardware goes, the Philips Xenium X8510 has a quad core MediaTek MT6589 processor, a Cortex A7 clocked at 1.2 GHz, a PowerVR SGX544 GPU and an IPS LCD display with a 4.7 inch diagonal and a 1280 x 720 pixel resolution. It also has 4 GB of storage, of which 1.7 GB are free and a microSD card slot with support for up to 32 GB of extra storage. 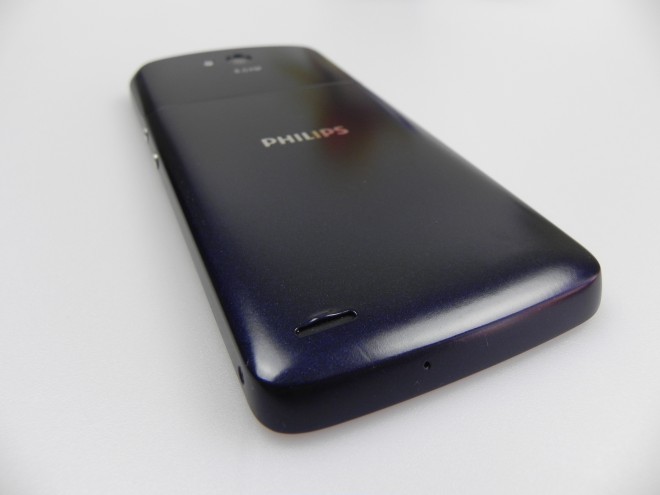 We’ve got 1 GB of RAM inside, an 8 megapixel main camera at the back with LED flash and a front 1.3 MP shooter. On the connectivity side there’s HSDPA with a download speed of 42 Mbps, WiFi, Bluetooth 4.0, EDGE and microUSB 2.0. There’s also GPS, an accelerometer, proximity sensor and a Li-Ion 3300 mAh battery, that on paper provides 18 hours of talk time, 10 hours of web browsing, 860 hours of standby functioning and 65 hours of music.

Our test, that involves HD video playback with WiFi on and brightness at 50% made us achieve 12 hours and 14 minutes, or about 4 hours of gaming. Charging takes 3 hours and 15 minutes, from zero to full. I would say I’m not very impressed by the 12 hours, seeing how a Galaxy S5 scores 11 hours and so did the iPhone 5s in our test. However, for a midrange phone, half a day of playback is pretty good and overall you’ll get about two days of moderate use out of this model. 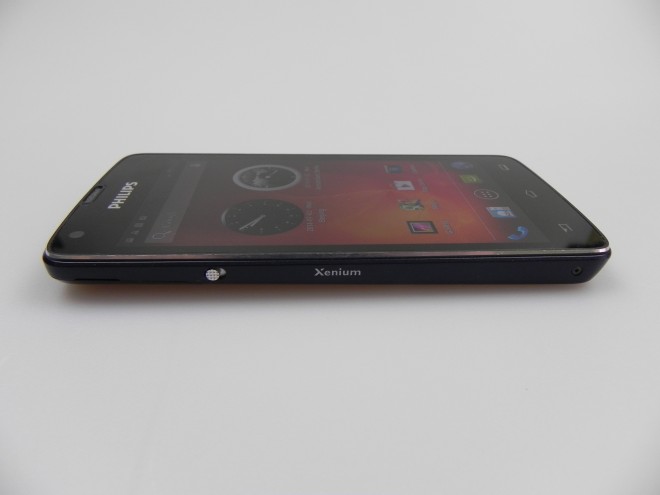 The Power Saving feature has a Default Mode and a Custom mode, that includes the options to set the brightness, timeout, WiFi Off, mobile data off, Bluetooth, GPS and clear running apps. Another useful feature of this device is the Fast Charge, that with 10 minutes of charge is able to provide 2 hours of calls or 20 hours of standby functioning. Overall, the battery is good, very good actually, but not stellar and I was expecting stellar.

As far as audio is concerned, we’ve got a stock player here, that comes with the usual standard EQ, complete with Bass Boost, reverb, 3D and genre based options. The back side speaker is slightly muffled, but the bass is OK and the volume is what I would call so-so, so it’s not very loud. All of the notes are heard well, so at least the sound is clear. The headphones bundled with the handset are made of cheap plastic and they also include a big remote in the mix. They’ve comfy, have a good bass and the peak volume tends to distort the experience a bit. 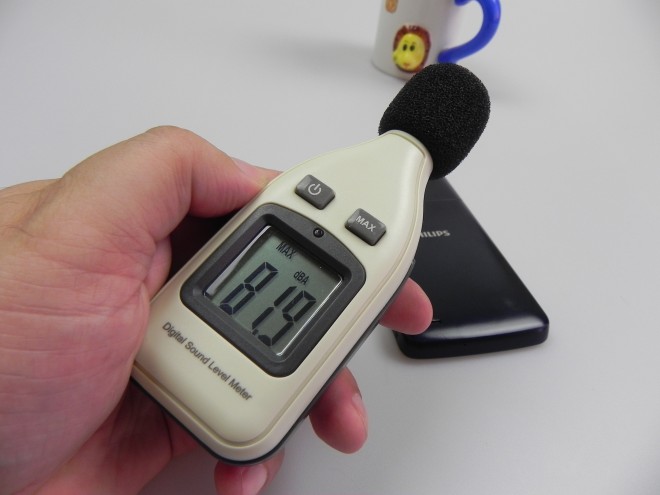 As far as the level of decibels is concerned, we scored 81.9 dBA at the back and 81.7 dBA at the front. Overall, the audio experience is not impressive and we also showed you a bit of a demo of the FM radio function. Moving on to the screen, Philips Xenium W8510 integrates a 4.7 inch 720p IPS LCD screen with some oversaturation problems, but also wide view angles, good brightness and crisp image. The pixels are of the RGB Stripe kind and the Lux level is 396, which is actually pretty good. 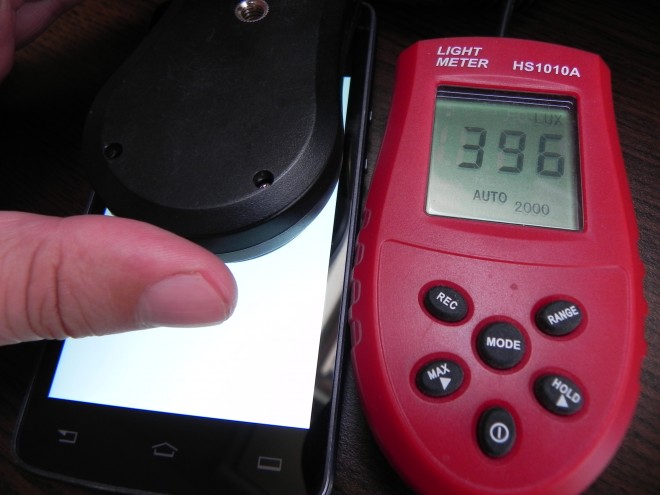 It beats high end modes like the LG G3 and its 343 lux units or the Xperia Z2 and its 366 lux units, so I could say the display is quite good. Now… the camera. This device comes with a main 8 megapixel camera with LED flash, F/2.4 aperture, focal length of 35 mm and a pretty much stock UI. That UI includes a front camera and flash shortcut on the left side of the screen. It also includes a variety of Capture Modes, like Normal, HDR, Beauty, Panorama, 3D Picture, Auto Scene, Smile Capture, Best Shot and EV Bracket Shot.

There’s also White Balance and settings like location, exposure, color effect, scene mode with 14 options, sharpness, hue, saturation, brightness, contrast and anti flicker. There’s zero shutter delay, face detection, self timer and continuous shot with up to 99 shots at once. The ISO level goes up to 1600 and video options on this model include EIS, microphone, audio (meeting/normal), time lapse, effects and the ability to capture Full HD video in 30 FPS.

The camera does 4X zoom and looking at the gallery of shots I’ve taken, I’d say this model creates some nice midrange shots, but not past that. There’s occasional oversaturated and burnt shot, because it was a sunny day. Macros are decent, panoramas look OK and we also get some nice 3D images, although they don’t impress me much. The HDR is well done, but a bit too bright and th photos are bright, crisp and the camera is about the same level as the 8 MP shooter on an Allview model from last year, for example. 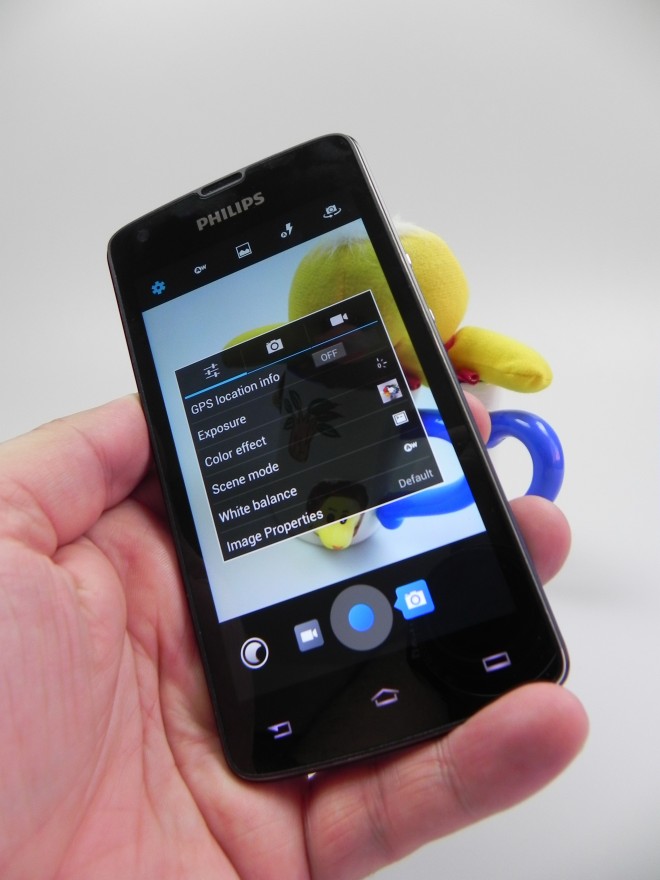 Sometimes shots are blurry for no apparent reason and I would say that the camera is reasonably fast and so is the focus. Philips Xenium W8510 takes Full HD 30 FPS videos in my least favourtie format, 3GPP, that has a low bitrate. The videos are crisp, white balance is good, so is exposure and the quality is OK. So are the colors, but the stabilization is poor. I’m happy that there’s no focus loss, but I must complain about the zoom that tends to be applied in slow steps. 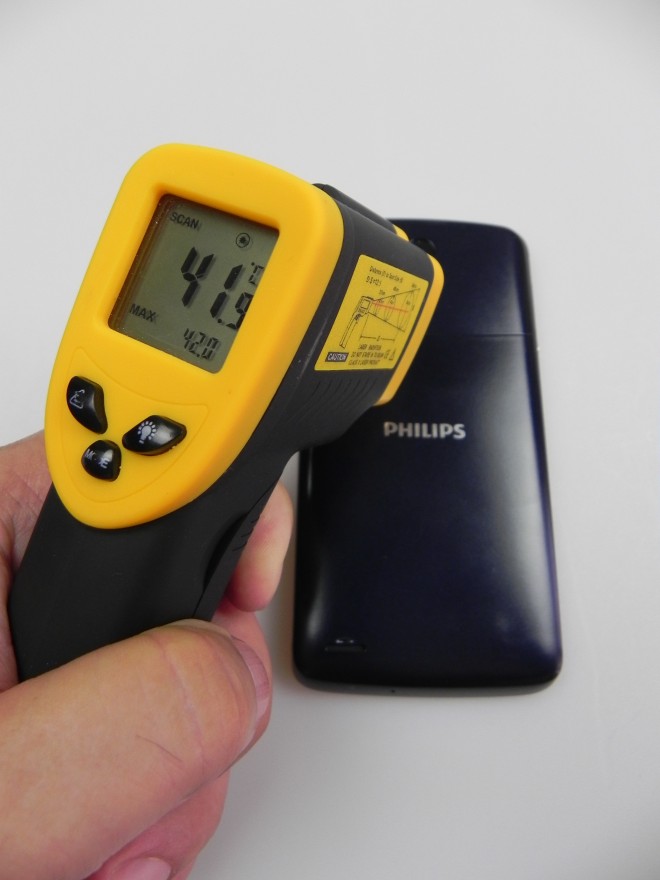 Overall I would say that the camera handled the cloudy day with alternating portions of sun pretty well, but still this remains a good camera only by midrange standards. You can also do a bit of editing, using filters, frames, crop, rotate, mirror and tweak exposure, contrast, shadows and sharpness. Now we leave behind the imaging and we move on to performance. Philips Xenium W8510 reaches a temperature of 42 degrees Celsius and it does overheat a bit, in an area that may actually bother you: upper display area. The browser is fast and the keyboard is comfy, so let’s see the benchmarks. I chose 3 devices with quad core Cortex A7 CPUs:

In Quadrant we scored:

The handset offers a good signal, loud volume and the earpiece is nicely separated from the rest of the facade, making interaction comfy. Sadly, the WiFi signal tends to be weak sometimes, for no reason. On the software side there’s Android 4.2.2, with little hope for an upgrade anytime soon. The experience is pretty much stock, aside from the random icon, wallpaper or widget. This model has no lag and runs hit titles like Asphalt 8 or benchmark games like Riptide GP2. The app list on this device includes Backup File Manager, Kingsoft Office, News+Weather, Notebook, Sound Rec and To Do, as well as Touch Pal keyboard, with a comfy experience, skins and settings of all sorts.

Then there’s wireless input and Xenium Club, with the latter offering you apps, wallpapers and themes to download. And now let’s see the verdict.

Xenium W8510 gets an 8.7 out of 10 for design, a 9 for hardware and an 8.7 for OS and UI. The final grade is 8.8 out of 10 and this midrange unit has probably the best battery of its segment, but there are flagships pretty close, like the Galaxy S5 and its 11 hours. However, in the sub 5 inch diagonal segment, this smartphone manages to shine, but it’s still not stellar.