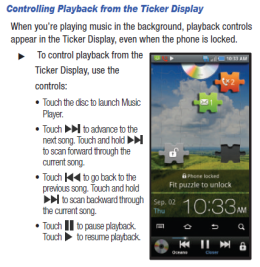 We’re moments away from the great launch of Samsung Continuum, the new Galaxy S with Android that was supposed to debut today. Although everyone was waiting for the Nexus Two, we’ll have to do with this handset, that sports a very interesting secondary display (known as Ticker Display).

Said Ticker Display is the secondary screen on the Continuum, that will be used as a notifications tab, according to the new handset’s product guide, that was recently revealed. This tab shows incoming calls, texts and can even display news and social networking updates. Weather, date, time and RSS will also be shown.

What’s important is that the Ticker is independent of the main screen, so they won’t work together, which is a cool feature, as you can learn everything you need from your phone without powering the main screen.