Although we’ve heard that Samsung has an unpacked event scheduled for May, where they might unveil the next Galaxy S unit, now it appears that Sammy also has big plans for this week. There’s a poster in London on Oxford Street in the window shop of a Phones 4u store, promising us a special Samsung launch on March 30th. What could it be? 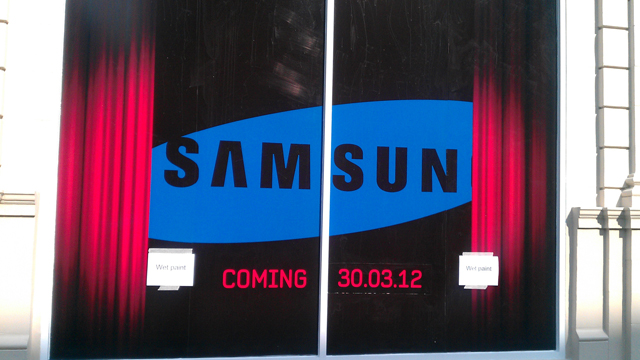 Last week we quoted a Samsung official, saying that the Galaxy S III has been pushed from May to April, trying to speed things up a bit to catch up with competition. Considering that HTC One X will bring its quad core hotness to the UK, I see every reason for Samsung to speed up the launch of the new Galaxy S and show it to us as a premiere this week. Of course, the launch this Friday could be the one of the Galaxy Tab 2 or merely the Galaxy Note 10.1, that have been showcased at MWC 2012, but not yet introduced on the global market.

I give this new Galaxy model launch on March 30th a chance of about 20 to 30% to happen, meaning that the launch of the Samsung Galaxy S III is more likely than Chelsea winning the title in England this year (sports analogy for the win!). What do you think? Any inside hints from people in London?