Samsung Galaxy S III may have been a no show at MWC 2012, but new rumors say that it will be coming next month. We also had some recent leaks to go with that info, including a bunch of specs and details about its design. Now, it appears that the new flagship from Samsung has had its benchmarks leaked. It’s speculated that this model goes by model number GT-I9300, that was recently found in the GLBenchmark suite of tests. 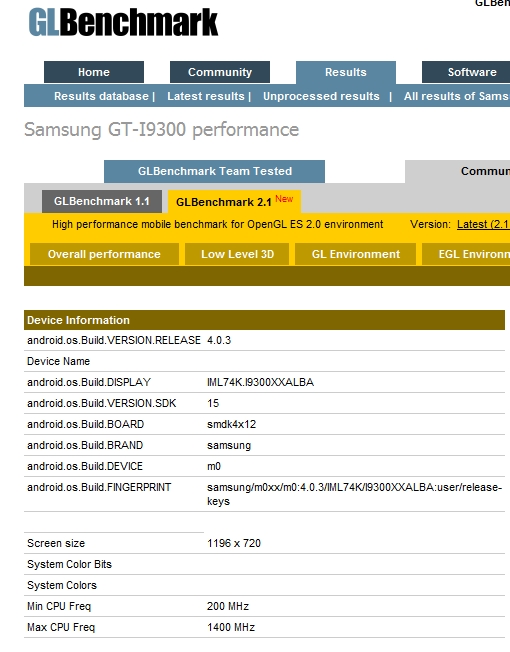 These were supposedly performed by a Samsung employee and the most important thing to mention is that the resolution of the device is 1196 x 720, so we don’t have a smartphone with a 1080p screen, as speculated last week. The choice of resolution suggests a design similar to the one of the Galaxy Nexus (buttonless), since that phone also has a 1196 x 720 pixel resolution. The CPU is listed with a maximum resolution of 1.4 GHz, but the number of cores isn’t mentioned sadly. There are only two possible choices here: the dual core Exynos 4212 or the quad core Exynos 4414, with the second one being the favourite.

Other stuff revealed by the benchmarks are the presence of a Mali 400 MP GPU, the same one found on the Galaxy S II, but this time with a higher clock speed. And finally, the phone is supposed to run Android 4.0.3, but there’s also a confusing aspect here: the I9300 appeared in a UAProf profile leak recently with a 1024 x 600 resolution, which kind of contradicts the Galaxy S II identity of the device. Also, know that the I9300 support pages have been pulled from Samsung global sites, so there must be something going on with this codename. Could this in fact be the rumored Samsung Galaxy S II Plus?