NenaMark1 is an Android benchmark focused on hardware accelerated graphics and also one of the hints concerning the existence of Motorola Droid X2 for Verizon. Now, the software brings a new leak, the one of the Sony Ericsson Azusa smartphone, as shown below. 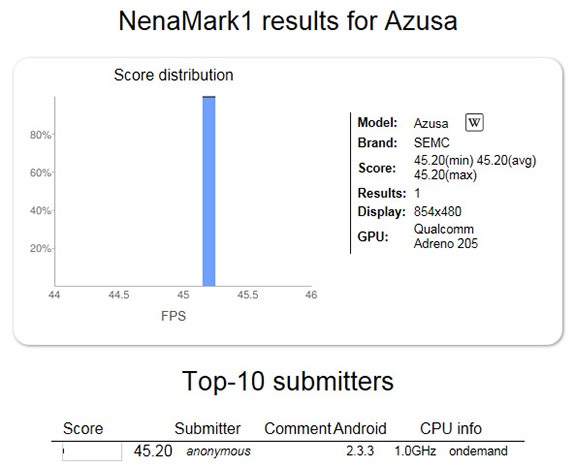 This handset runs Android 2.3.3 Gingerbread and packs a FWVGA display, with a 480 x 854 pixel resolution. Also, under the hood of the phone we find a Qualcomm Adreno 205 GPU, kind of like the one on the Xperia Play, so it’s most likely also equipped with a 1GHz Snapdragon CPU.

As far as the benchmark is concerned, the result it returns includes a score of 45.20, making the device the equal of Sony Ericsson Xperia Arc. Could Azusa be the mysterious Xperia Acro, that in the end was revealed to be the Japanese version of the Arc?