Steve Jobs is prepping to go live on June 7th, in order to announce the iPhone 4G, but yesterday he did a warming lap at the All Things Digital conference. He spoke about the lost iPhone prototype that was misplaced by Apple, the conflict with Adobe and the iPad. 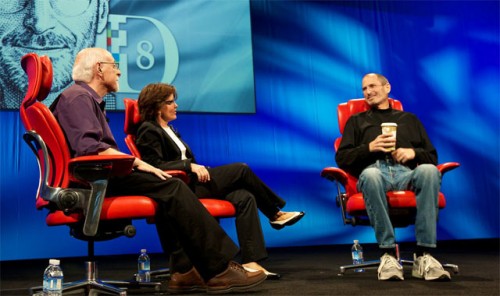 Jobs recapped the whole lost iPhone thingie, saying that prototypes of the new generation of iPhones were handed out to employees and one of them lost an unit in a bar. The person who found the phone tried to sell it and got in touch with Engadget and Gizmodo. The latter made the deal and before you know it, the whole thing went public.

Apple’s head also mentioned that people advised him to stop pursuing Gizmodo for their actions, but he claims that he won’t let this slide. It would simply mean “changing the core values”, so we guess that Giz is now on Apple’s  black list, right? Next up on the discussions list was the ETERNAL Flash on iPhone/iPad issue, with Jobs once again supporting HTML5 instead of this standard.

We have to admit that Apple’s guru was pretty polite on the competition with Google and Microsoft, as he mentioned that surpassing the value of the Redmond giant last week was no biggie and the duel with Google is not exactly what it seems. However, he dropped a hint about rudeness in there, maybe referring to some of Google’s remarks regarding Apple.