Verizon has just leaked yet another part of its lineup, the Q4 section, showing us quite a bunch of goodies. They include the HTC Merge, Droid Pro, LG enV Pro and Droid 2 Global, names that we’ve been hearing for a while now. These 4 handsets are world phones, that will function both on Verizon’s network in the US and internationally. 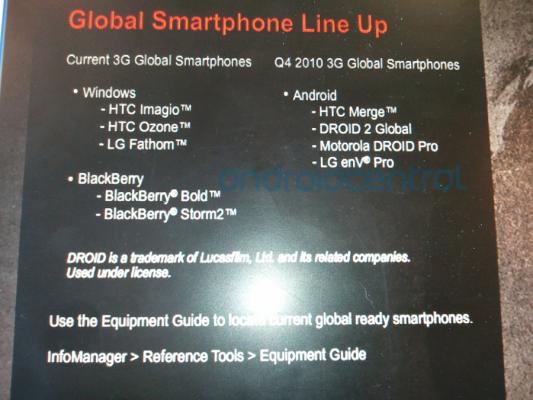 We expect the handsets to pop up in Q4, but delays can always spoil things, so don’t bet your house on these launches. Droid Pro was announced only days ago and we know it sports a surprising design for a Droid model, that includes a front facing QWERTY keyboard, Android 2.2, a 3.1  inch touchscreen and 1GHz CPU.

Droid 2 Global became famous when we learned that it was going to sport a 1.2GHz CPU, while HTC Merge brings back the days of the hot Touch Pro device, through a nifty sliding keyboard, combined with Android 2.2 and a large touch display.