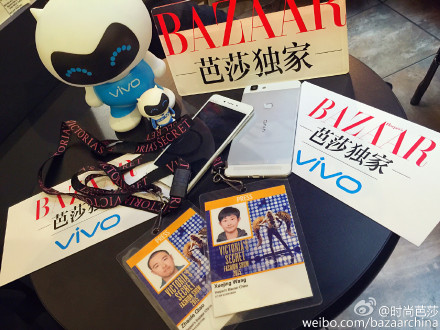 Vivo has been busy teasing its upcoming high end smartphone X6 for a while now and today the phablet gets even closer to reality. Thanks to a Weibo post we get to see the device in a clear shot, with toy robots and fancy invites and passes around it.

The handset is expected to provide a faster performance, courtesy of 4 GB of RAM and it also packs a fingerprint scanner and a design that reminds me of the iPhone and latest Huaweis. Aside from the 4 GB of RAM, rumors talk about 1 GB of dedicated video RAM memory, a premiere for handsets. The phablet will adopt a 6 inch Quad HD screen with Force Touch and a deca core Helio X20 processor, as well as a 21 megapixel camera.

A 4000 mAh battery will be available and the design feels a lot like the Vivo X5 Max, but in a larger form factor. Interestingly, the leak was done by fashion magazine Harper’s Bazaar and Vivo is an official brand for Victoria’s Secret fashion shows, which the magazine editors were covering. On this occasion they were given a sneak peek at the upcoming phone.