Today Xiaomi CEO and Chinese tech personality Lei Jun announced on Weibo that the company had reached over 10 million units of the Xiaomi Mi3 shipped. To celebrate, he also announced the release of a champagne gold version of the handset, shown below.

As the Mi3 sells very well, we’re still waiting for the Xiaomi Mi4, that keeps leaking, especially over the past week. I should also mention that Xiaomi has been on a roll lately, having sold over 26.1 million handsets this year alone, more than in the whole year of 2013. A shocking number was the 100 million units said to be sold next year by the same prolific company. I have to say that the Xiaomi Mi3 doesn’t look bad at all in champagne gold. 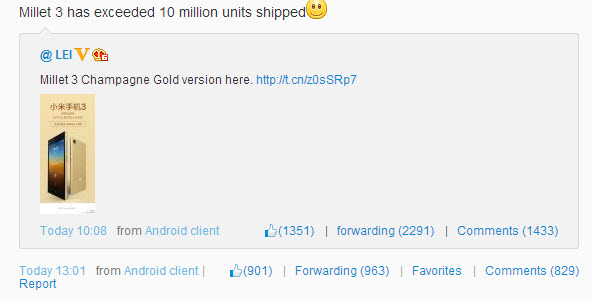