US Cellular recently added the midrange phone LG Optimus F7 to its lineup and now here’s yet another midrange model coming: the ZTE Imperial. This device was recently leaked in internal documents, that include the picture below. 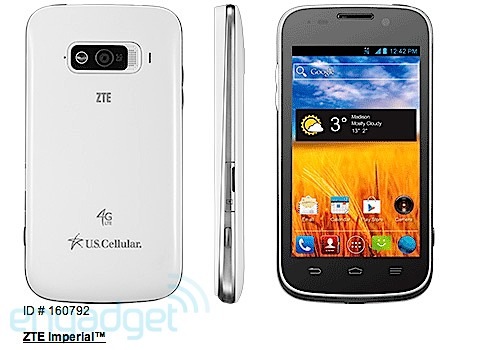 The Imperial is supposed to arrive on June 17th and it packs a 4 inch 480 x 800 pixel display, Android 4.1 as the OS and a 1.2 GHz single core processor. There’s also 1 GB of RAM on board, 4 GB of built in memory and a 2500 mAh battery. At the back we’ve got a 5 megapixel camera and other specs include a microSD card slot and even LTE makes the cut.

Bluetooth 4.0, WiFi and GPS round up the specs list of this model. The battery life of this model is about 12 hours (talk time) and in standby this unit can reach up to 280 hours. I don’t know what’s up with ZTE lately, with these poor names. We’ve got the ZTE Vital and now the Imperial. Does anyone actually like these names?