Strategy Analytics’ latest research shows that smartphone shipments have exploded over the last year. They grew 78% in Q3 2010, compared to the same time period of 2009. Apple was very impressive and gained lots of smartphone segment market share, reaching 18.3%. They’re right behind Nokia, with 34.4% and in front of RIM, that only reached 16.1%. 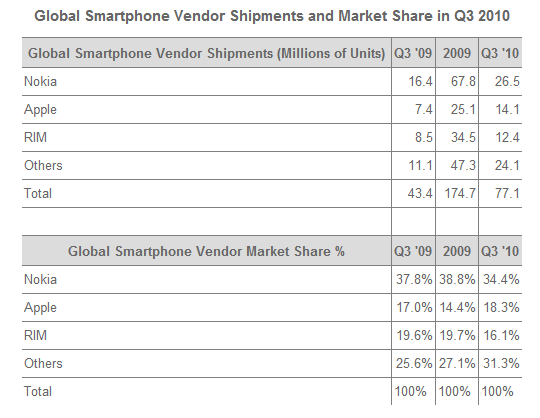 Neil Mawston, Strategy Analytics director says that this is the fastest growing rate since the mid-2000s. The only problem is that the following months will be plagued by heavy demands, because of the holiday season. It’ll be tough for component suppliers to meet demand, so we might be facing a shortage.

Back to the statistics, we have to mention that Nokia shipped 26 million smartphone units, although its market share dipped to 34%. RIM continues to suffer, as its share went down from 20% to 16 over the past year.