AdMob has recently published a brand new study concerning the use of mobile apps on Android handsets, as well as the iPhone and webOS handsets. The statistics shown below include figures for the month of January and from them we learn that, for example, Android and iPhone users spend about 79-80 minutes a day with their apps. 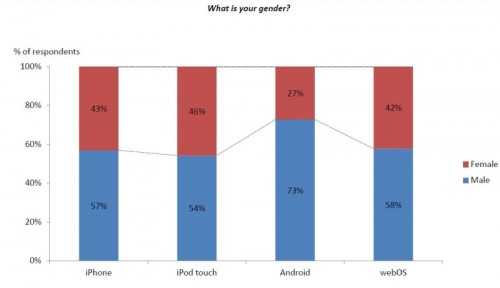 Meanwhile, the iPod Touch users can waste even 100 minutes of their life, on average, by toying with apps. WebOS handset owners spend 89 minutes a day using software, while the iPhone and Android phone owners download an average of 9 new apps per month. This number reaches 12 in the case of the iPod Touch and 6 for the webOS devices.

We also have to mention that Apple’s App Store gets twice as many paid app downloads than the Android Market and webOS Catalog. The reasons? One would be the age of the App Store, its user-friendliness and the reasonable prices for software. The iPod Touch users generate quite an impressive amount of revenue, spending around $11.39 on average on apps, while webOS users spend $9.55, more than Android users ($8.36) and iPhone owners ($8.18). 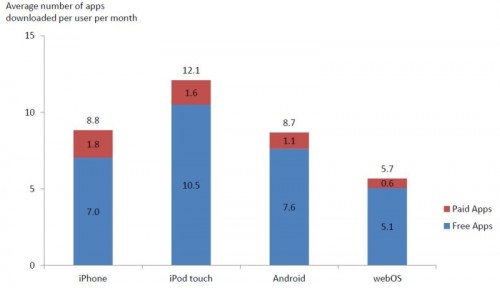 AdMob’s statistics also mention that 73% of Android phone users are male, compared to the 57% of the iPhone and the 54% of the iPhone, going to 58% for the webOS phone. Also, the iPod touch is a gadget for youngsters, with the official figures showing that 78% of its owners are 25 year old or less.

Since we’re approaching the iPad’s launch, we have to mention that the ones who bought iPhones are 3 time more convinced of buying the new tablet, compared to Android fans and twice as eager, compared to webOS users.