November was a pretty poor month for chipmaker MediaTek, that registered a drop in sales of 22%. The consolidated sales are the ones affected here, reflecting the usual seasonal weakness.

The company reported $538 million in consolidated revenues for November 2014, down 22.4% from October’s figures. The fourth quarter revenues of the chipset company will meet the lower end target of the firm guidance, say market sources. Inventory adjustments at the firm’s smartphone clients in China have generated slow sales at the chip provider, claim sources. Previously Mediatek predicted that consolidated sales for the fourth quarter would drop 6% sequentially, compared to the 2% increase in Q3.

Overall, MediaTek’s sales for November 2014 were 59.4% higher compared to the same period in 2013, so things aren’t so bad. I wouldn’t worry too much about MediaTek, since they have new business coming their way. They have a rich CPU roadmap and Qualcomm is facing problems in China, plus there aren’t many rivals with prices as good as MediaTek’s. 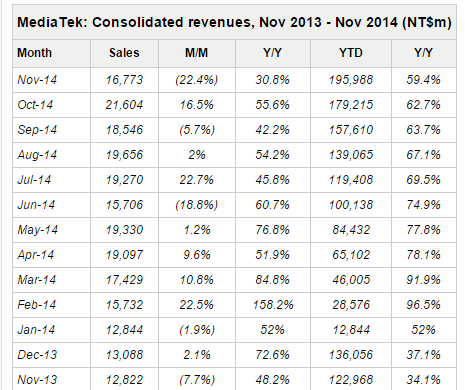 How Big is Too Big? Average Screen Size of Smartphones to Pass 5 inches in 2015, According to Analysts