A recent series of stats from Flurry, that did a market study shows that Amazon Appstore apps earn 3 times more cash than the Google Play apps, but Apple surpasses them both. To put this into context, you should know that Apple passed the record 25 billion downloads with 550k apps available this month. 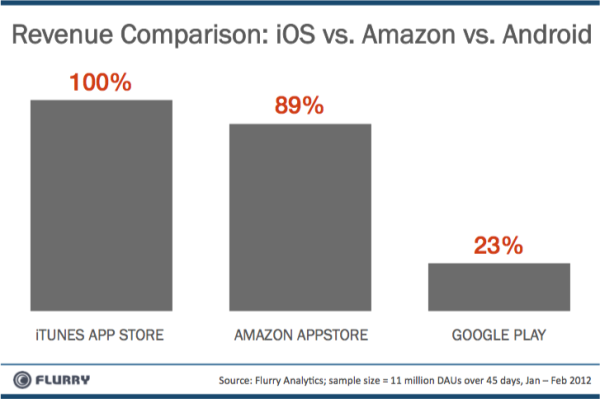 Meanwhile, Google passed 10 billion downloads with 400k apps in December. Amazon’s Appstore apps bring three times the revenue of those in Google’s Play store. Of course, the Apple App Store is still the biggest cash cow, while Amazon Appstore earns about 89% of the revenue that Apple does and Google’s Play only 23%. Flurry analysts compared revenues by saying that for every $1.00 brought by an app in the App Store, Amazon Appstore would get $0.89 and Google Play $0.23.

The results look pretty similar to the ones resulting from an analysis done by Flurry last December. At the end of last year, for every $1.00 in the App Store developers got $0.24 in Android Market. To get these states, Flurry took into account 11 million daily active users of top ranked applications on iOS and Android over a 45 day period.