Only a few hours ago has started Google to update its latest flagship smartphone to the new version of Android that was just released. For the entire Nexus line-up the update has already been seeded and it brings fixes in the areas where it was needed. 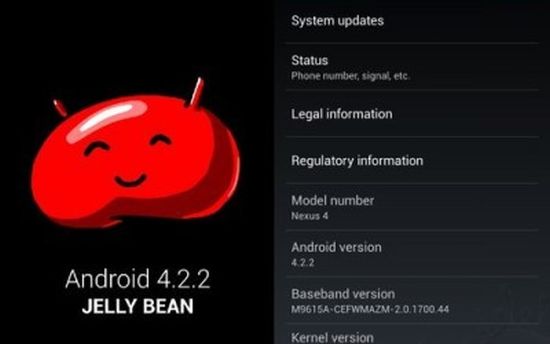 The Galaxy Nexus and Nexus 7 were among the first to be updated to Android 4.2.2, the new version of the OS from Google. Though it will not bring any new features, as opposed to 4.2.1, the build has been mostly released as a maintenance update for some problems that the users have reported since Android 4.2 came out. Among the fixes there is the issue with Bluetooth connectivity and also very minor changes to the UI. As it always seems to happen, the users managed to extract and post the links for the .zip files to be manually flashed on the Nexus devices.

For the Nexus 4 Google waited a little longer to release the new version of the software. That is cause some specific issues with the device needed fixing and also one other item. It seems Google considered it right to disable the option in the service menu for enabling LTE on a specific band. For now, until the community manages to find a workaround, you’ll just have to rely on HDPA+. The update file for the Nexus 4 is only 50 MB in size. You can manually download it and install via recovery if you are on a stock ROM.