The recent comScore report on the evolution of smartphone adoption in the European area known as EU5 (France, Germany, Italy, Spain, UK) shows that Android is rocking, while Symbian is descending into agony. As proved by the table below, Android has gained an impressive 16.2% between July 2010 and the same month this year. 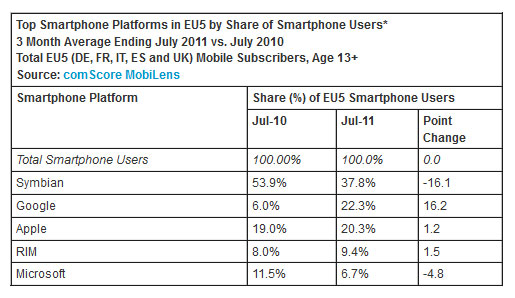 Meanwhile, Symbian has lost an impressive 16.2% of the market share, mostly because of the antique UI and lack of new models. Luckily Symbian Belle is shaping up to be an interesting OS, although it doesn’t quite matter with nowadays’ evolution of handset OSes. Meanwhile, while Symbian stays on the first place in Europe with 37.8% of the market, Android fllows with 22.3% and then iOS with 20.3% and I’m talking only smartphones here.

Next up is RIM with 9.4% and finally Microsoft, losing market share from last year, no less than 4.8% that brought it to 6.7% now. The table below shows the public’s preference for a certain brand of the Android world, meaning that they’re really into HTC, followed by Samsung, Sony Ericsson, LG and Motorola. HTC gets a 34.6% share, while Samsung is close behind with 31.7%. Do you agree with these figures and really favour HTC?