Comscore recently published a smartphone report, showing statistics from October 2009 to January 2010 and revealing the incredible growth of the Android platform. The chart below is pretty clear on that matter, showing Android’s over 4% jump in share of smartphone subscribers. 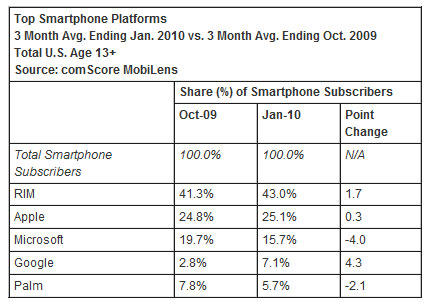 Google’s wonderkid is second last to Palm, with a 7.1% market share among smartphone platforms, but the feat is amazing, since we’re talking about an OS that’s only 2 years old after all. In case you didn’t get the picture, we’ve got another small table below, showing the huge percentage change in smartphone market share, as far as Android is concerned.

With the huge number of Android phones coming this year, we expect the percentage to be at least 10% before the year end.