Up until now the trial involving Apple and Samsung didn’t bring out any earth shattering proof, in spite of the prototypes we’ve seen so far. Now, today we may have just seen that bomb we were waiting for, the definitive proof from Apple. They pulled out from the hat a Samsung internal document that proves Sammy was copying Apple. 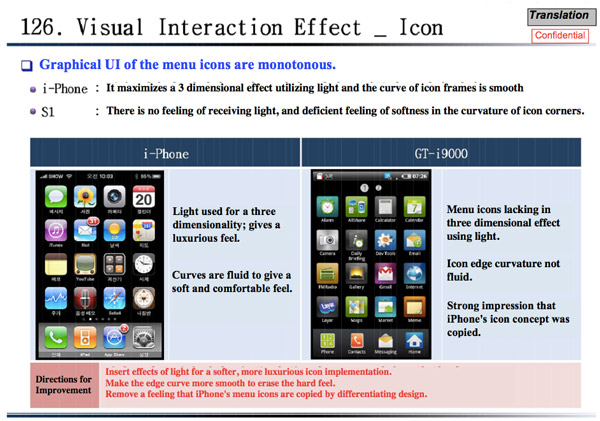 As you can see, there are recommendations for engineers who take care of the UI, saying that the interface needs effects of light for a more luxurious icon system. Also, it’s written that they should erase any feeling that the iPhone icons have been copied. This is just a mere portion of the entire incriminating document, that’s 132 page large and it’s written in 2010 by Samsung engineers. It also compares the Galaxy S and iPhone several times and gives recommendations on how to get rid of differences.

The idea is to copy Apple without anyone figuring that out. Samsung could obviously say that the document is doctored or that it’s logical to compare its products to its rival’s. Anyway, this feels like a bomb unveiling, that might just bring an Apple win.