Here’s a funny theory: the “S” in iPhone 5S stands for security, unlike the S in the 3GS that stood for speed and the S of the 4S that stood for Siri. There’s a recently filed patent showing that Apple is working on integrating more biometrics security components into mobile devices, as shown below. 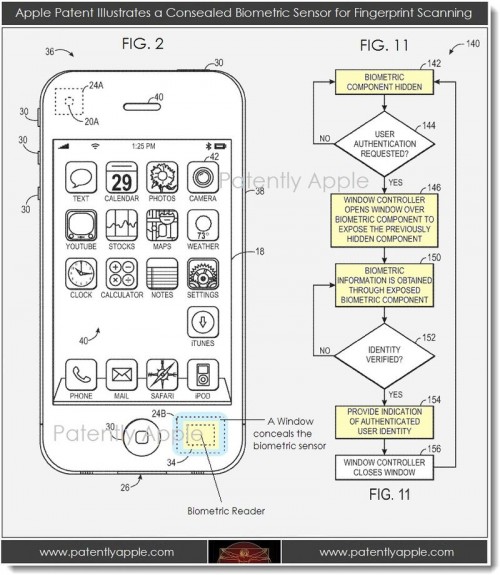 These include the iPhone, iPod Touch, iPad and iPad Mini, as well as notebooks, everything in order to ensure a safe and secure environment, especially in the field of e-commerce. Security was always a major concern, especially in the modern times of NFC-based transactions, with Google widely criticized when Google Wallet first appeared, when it came to security and authentication. Apple’s patent application may be a response to Google’s security issues, as NFC is implemented all over the place, while Apple is happy with its own Passbook app.

The patent here shows a fingerprint reader, one that’s usually hidden under an opaque translucent display or skinned to match the color of the device. On a white iPhone, for example, the fingerprint reader would be hidden behind a screen that is white to match the case. When the user needs to authenticate the translucent window will turn clear and reveal the scanner. Do you think there’s a shot of this making it to an iPhone?