If you’re looking for a Nokia phone on the T-Mobile network, you’ll be pleased to know that there’s been a leak on the web, with a screenshot showing the roadmap of the carrier. Said roadmap shows a new smartphone called Nokia Flame 4G with a launch date listed as April 24th. 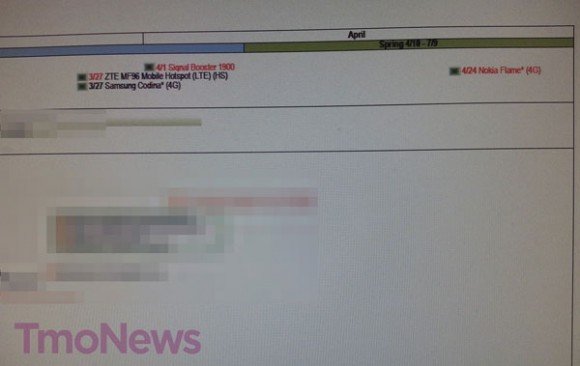 The device will be a Windows Phone 8 smartphone apparently. We don’t have any hardware intel on the handset right now, but there were rumors about a Nokia smartphone with the same name that appeared last year. Back then the Flame was seen as a lower end device, one that would actually make sense, since Nokia has a hard time competing with high end models on the smartphone market.

Nokia Flame 4G is rumored to pack a 4 inch screen, 512 MB of RAM and a 1 GHz dual core CPU. It’s also said to include 4 GB of storage and a 5 MP camera, plus a microSD card slot for extra storage. This could in fact be a rebranded Nokia Lumia 520, that we’ve heard rumors about lately.