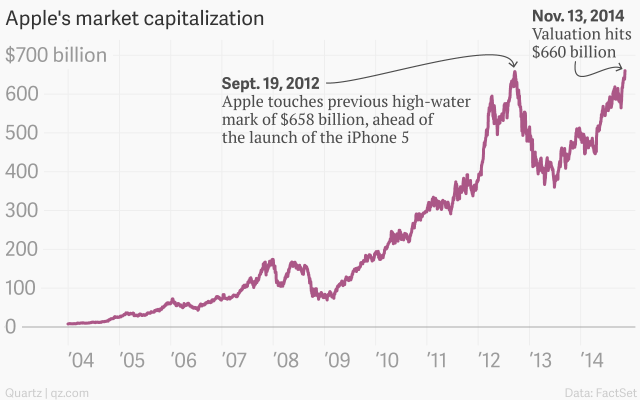 Apple’s share grew today and for a good reason, since the company reached an all time high for its stock value. The Cupertino giant went to a crazy $663.2 billion, a record even for them. The previous high point of the company’s market cap was in September 2012, at $658 billion.

However, things got tough in June 2013, when it hit a low $373 billion. At that time people thought that without Steve Jobs and without inspiration, the company was headed for another downtrend, like the time before Jobs came back. But now the iPhone and iPad creator is back and blooming, as the iPhone continues to sell very well. Its sales are growing with double digits and that’s even more impressive because we’re talking about big numbers.

The iPhone revenue was $27 billion last quarter alone, which is the value of big companies out there, so that in itself is impressive. That’s a 21% year over year increase. For the quarter we’re in right now, Apple wants to grow even more, forecasting more revenue gains. They’re talking about up to $65.5 billion in total revenue, which would mean an increase in sales of 15%. Who can stop this juggernaut?