We’ve written about the Scuff Gate iPhone 5 scandal immediately when it appeared and now it turns out that even Apple officials are aware of the problem and even ready to comment on it. Supposedly Apple’s Phil Schiller took the time to respond to a worried iPhone 5 owner’s email and he even did that early in the morning according to the screenshot above. 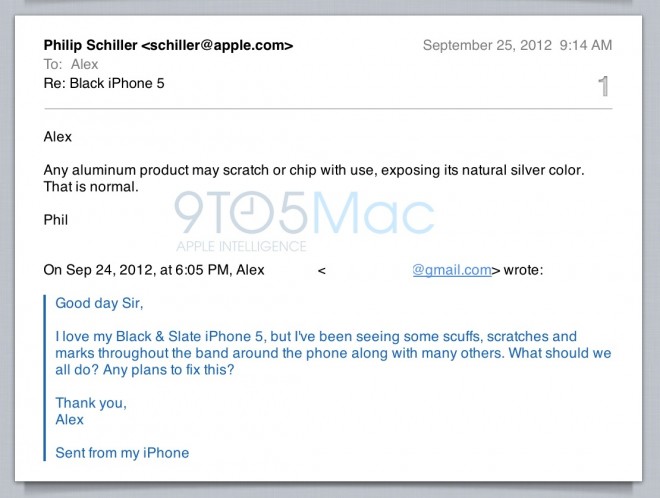 Of course, this could be easily faked, but it’s just the simplicity of the fake that makes me think… it’s not a fake. I guess that in a couple of days we should be hearing from Apple, since they never let scandals like this go by without reacting. One Antenna gate was enough and then the Battery Gate from last year, that passed very fast… and now Scuff Gate may seem like a minor thing, but chipping and scratches have long time haunted the HTC One S, so this must be handled in the right way.

Let me remind you that the black version of the iPhone 5 is prone to scratches on the sides that reveal the metal underneath with a silver shine. So, what do you make of this? Fake or real? How would Steve Jobs react to this is he were still here?