Announced one week ago, the ASUS PadFone 2 promises to be one of the most appealing products of the year end, a perfect hybrid between a high end Android smartphone and a 10 inch tablet. However, it’s the ticker of the handset that has us particularly captivated, especially after it has been put to the test and impressed everyone in the Quadrant benchmark. 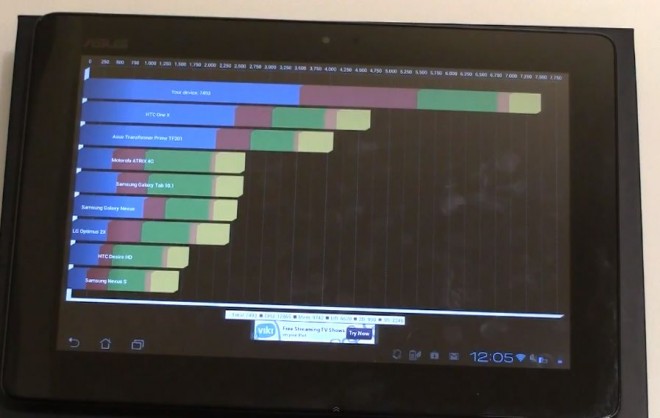 I have to remind you that the PadFone 2 has a Qualcomm Snapdragon S4 Pro APQ8064 quad core CPU at 1.5 GHZ, a popular choice these days, being included on the HTC J Butterfly, LG Optimus G and LG Nexus 4. The processor is accompanied by 2 GB of RAM on the new PadFone and as shown in the video below, the device manages to score a very good 7493 points, while the HTC One X for example is far behind, at 4700 points. Even Samsung Galaxy Note II scores 6000 points at best and we’re talking about comparing devices out of the box here, not custom ROMs and tweaks.

This is a very impressive score, but we have to check out what the LG Optimus G and HTC J Butterfly can do, before truly appreciating this handset. It’s looking good so far and I have to remind you that the hybrid comes to Europe and Asia around December with a price of around 800 euros for the combo.