ASUS ROG Phone 3 just became official, as the first Snapdragon 865+ phone on the market and we were lucky enough to get one for testing and unboxing purposes. It’s priced up from $999 and it comes with a glass and metal body, a triple camera and a large battery. The follow-up to the ROG Phone II from last year, which from what I understood was a hit (particularly in the $500 Tencent version) was created using the feedback from users, gamers and eSports big names. What came out of that you can learn below.

The device couples a few trendy features together: 144 Hz screen, a Snapdragon 865+ CPU, a 6000 mAh battery and side gaming buttons, plus a much improved cooling system. Perfect for playing mobile games and online slots for a longer period of time! There are also brand new accessories, that upgrade the previous ones. We have all the details, unboxing and first impressions below: 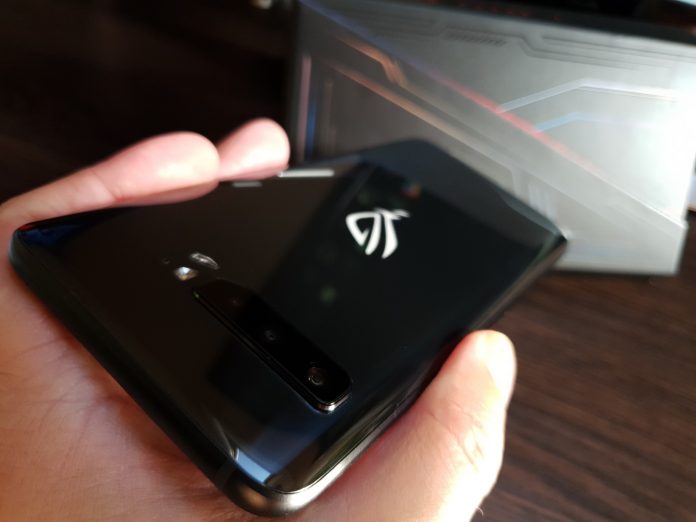 So, as usual ASUS provides a sci-fi looking box, a prism that comes out of another prism, much like a spaceship. Inside we find the Aero Active Cooler 3, a fan that’s mounted on the back to cool the device. It attaches with a clip and hooks up to the proprietary port on the left of the device. It also provides you with an USB-C port and an audio jack and you can actually feel the flow of cool air at the back. Also inside the box we found an USB-C to USB-C cable, the 30W charger and plugs for ports, as well as an USB-C to audio jack adapter. We also get stickers and a metal key used to access the SIM slots.

ASUS also provides a “skinny” case, which lets you see the shiny backlit logo and all the bells and whistles of the design. 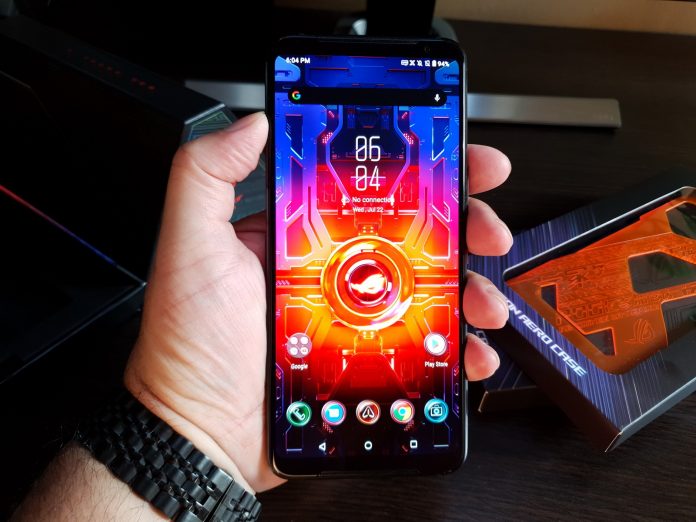 ASUS ROG Phone 3 is very similar to the ROG Phone II in format. It basically only differs in two ways: smaller speakers upfront and sans copper accents, plus a fully glossy back made of glass. There’s no metal insertion shaped like a sword, like we saw on the ROG Phone II. This time the back is all glass, a bit slippery, but luckily we have cases to solve that. There’s also an aluminum frame and the build is very solid and sturdy. The device is rather massive, with a 240 gram weight and a 9.85 mm waistline. It’s very comfy to hold in landscape mode, as the weight is well distributed. 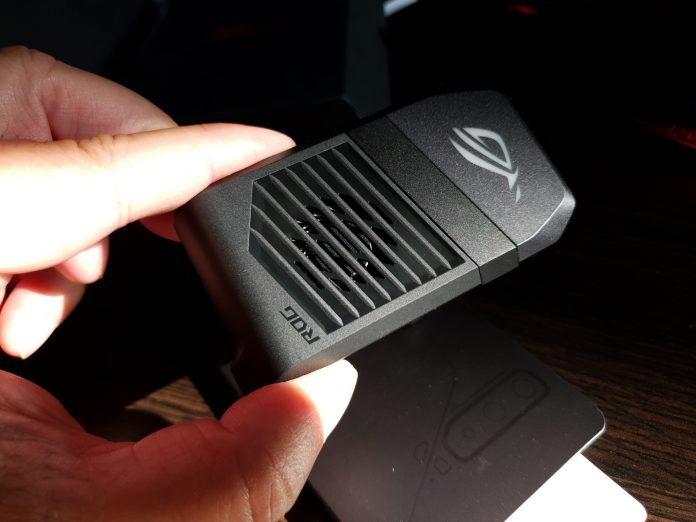 Aside from the Aero Active Cooler 3 bundled in the box we get a massive upgrade for the internal cooling system. It’s a combo of cooper heatsink (6 times bigger than before), a brand new 3D vapor chamber and a graphite film. All of these should keep the phone very cool and I hope I won’t experience some of the overheating I had when gaming on the ROG Phone II and streaming on YouTube. 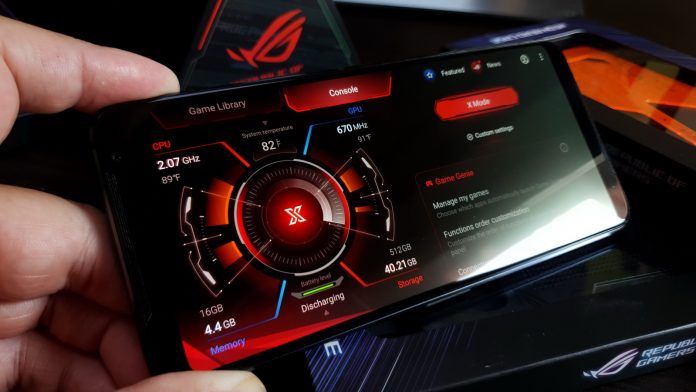 On the hardware front I’ll start with the innovation. We have a special connector on the left, while on the right there’s the set of AirTrigger buttons. Now each of those tactile areas is split into two sub areas, so you now get 4 shoulder buttons. You can also swipe on them for extra gestures and shake the phone for even more extra gestures. There are basically “7 buttons” here, all of them with Macros to associate with virtual controls.

There are also cheaper and lighter specced models, with 12 GB of RAM and 128 GB or 256 GB of storage. There’s no microSD here, since there’s plenty of storage. The battery remains a 6000 mAh unit, just like the ROG Phone II had. Optimization has made it provide improved battery life, compared to the predecessor. On paper ASUS provides 9 hours of PUBG Mobile gaming. There’s also 30W charging. 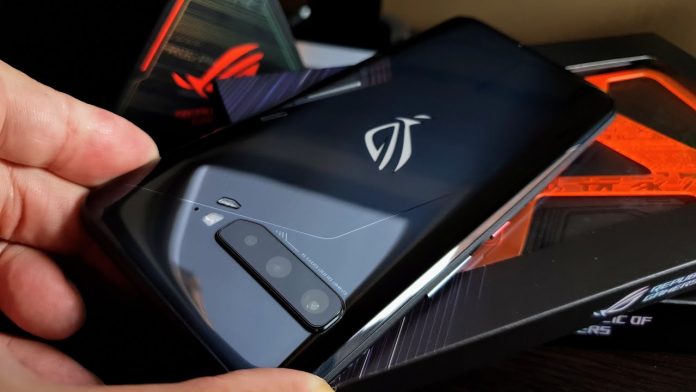 On the camera front, there’s a 24 MP selfie shooter, sans notch or punch hole, while at the back we find a triple cam, set up like this:

The camera films in 8K, at 4K 60 FPS and it also has Motion Tracking, Night Mode, Portrait and a few more features, which we’ll test and get back to you with impressions. I can say that selfies are quite solid and closeups are detailed, at first sight. The on board stereo speakers placed upfront offer Dirac Sound and Game FX technology and moving on to connectivity we get both WiFi 6 and 5G, as well as 4G, NFC, Bluetooth 5.0, GPS dual band and an USB-C port at the bottom.

The phone’s design involves 4 microphones and 4 WiFi antennae, so you’ll never lose signal no matter how you grip the handset. Accessories will be connected via the proprietary side port. 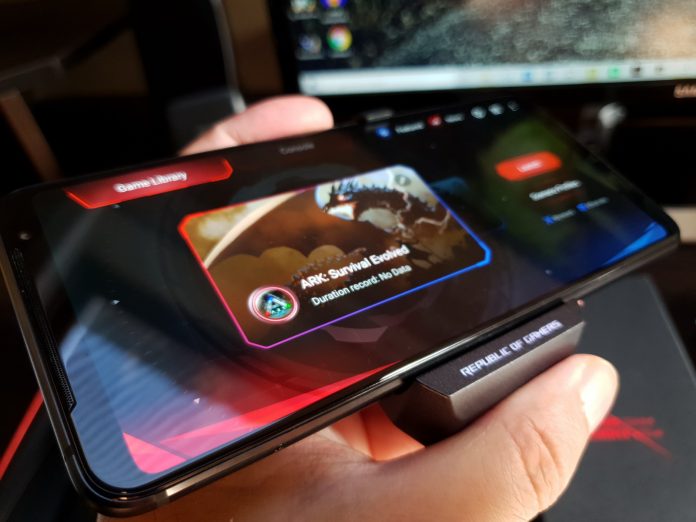 ASUS ROG Phone 3 runs Android 10 with ROG UI on top and the special Armory area where you can see the videogames you have installed, each with a special profile, plus many options and settings. You can tweak refresh rate, fan speed, RAM allocation and more. There’s also Game Genie, used to stream games to Twitch or YouTube, or record gameplay on the device. There’s also an X Mode, used to activate a high performance mode of the handset, which provides all the firepower needed for gaming. You can also tweak the Aura ROG lighting of the back side, with lighting patterns, colors and more (strobe, breathing and more). A ton of options can be set up and there’s also a side menu with Macros, refresh, DND and more.

The latter two cases are shown in the unboxing video and the ROG Lighting case uses the second flash at the back to guide light through channels and show a lit up pattern that reveals the ROG logo and writing. Once attached it also triggers a brand new sci-fi looking theme. The back illumination and pattern feels like the lids of some of the recent ASUS laptops, with anime themes. 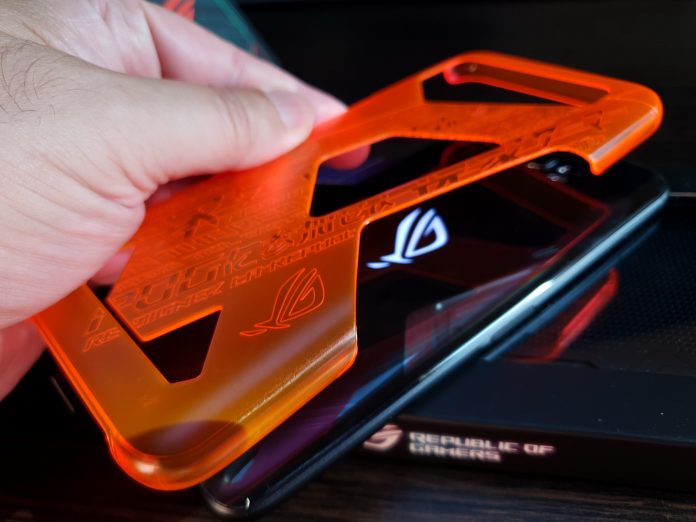 ASUS ROG Phone 3 is a massive gaming phone, ideal for eSports, gaming and pushing ahead the entire phone segment (LPDDR5, UFS 3.1, 5G, 144 Hz and the works). It’s got the latest cooling system, more gaming buttons than before, a lot of optional accessories and an improved camera compared to the ROG Phone II. It’s not meant just “to play games”, it’s meant for streaming, competitive gaming, long hours of gameplay and professional gaming at that.