About a week or so after the Unpacked event held by Samsung on August 5th, we got around to unboxing the Samsung Galaxy Note 20 Ultra 5G. This is the Fall phablet that Samsung launches this year, with the same Exynos 990 CPU as the S20 series, at least in our region. We have the Mystic Bronze cool new hue and you should also know that this smartphone brings an S-Pen with the lowest latency ever: 9 ms and also with a generous 6.9 inch display, with 120 Hz refresh rate and a periscope camera. Priced at $1400, the device gets unboxed below.

The handset was up for preorder with a special offer till August 20, that provided buyers with a pair of Galaxy Buds Live headphones. Samsung Galaxy Note 20 Ultra is available in Mystic Bronze, Mystic Black and Mystic White and it inaugurates the Gorilla Glass Victus protection for the screen and its back side. It’s supposed to be tougher than Gorilla Glass 6 by about 20%. The handset also has a stainless steel frame and it’s IP68 certified, while the back camera protrudes quite a bit, but it’s not as gigantic as the S20 Ultra one. 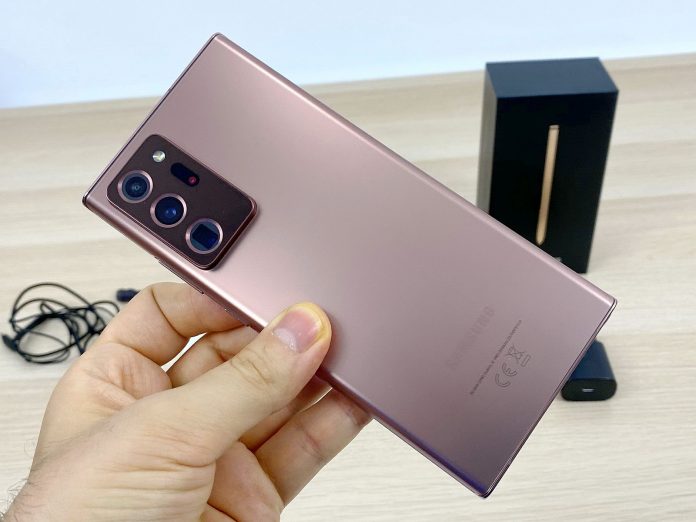 Back to the unboxing, inside the box we find the following:

There should have also been a set of replacement tips for the S-Pen and a tool to pry them out, but our test unit didn’t have them. The commercial unit probably will. Samsung Galaxy Note 20 Ultra packs a 6.9 inch Dynamic AMOLED screen with a resolution of 3088 x 144 pixels and also with an adaptable refresh rate of 120 Hz. If you enable that you are limited to a Full HD+ resolution and if you want Quad HD+, you have to switch to 60 Hz. 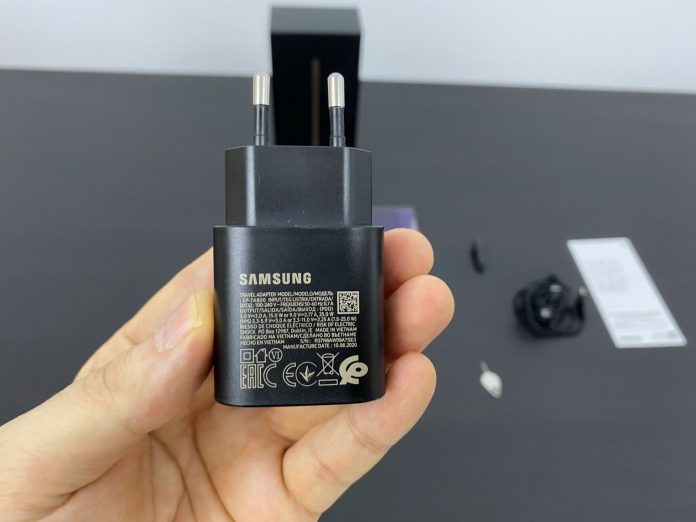 I can tell you that this screen is pretty much as bright as the S20 handset screens. Oddly enough, this phone feels comfier and easier to wield than both the Galaxy S20 Ultra and the Galaxy Note 10+ before it. It’s also more angular, more sober and not as massive. It measures 8.1 mm in wasistline and weighs 208 grams, with a pretty well distributed weight. I could actually use it with a single hand and grip was fine. The matte back doesn’t draw prints or lint. 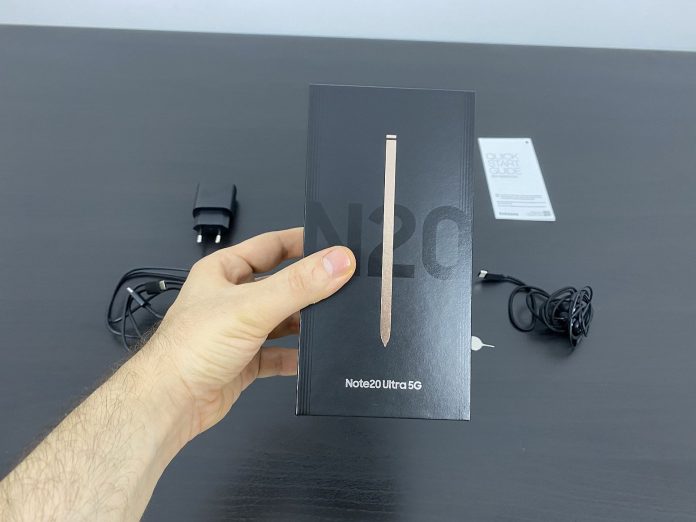 Inside we find the same Exynos 990 CPU As the S20 series, while the US and Chinese market get a Snapdragon 865+ CPU. Color me jealous… Sadly, the CPU throttles yet again and it also overheats during long sessions of picture taking, gaming and more. Believe me, I’ve tested it. There’s also 12 GB of RAM inside, UFS 3.1 storage up to 512 GB and a microSD card slot. The battery is smaller in capacity than expected, at 4500 mAh, a 200 mAh bump up from the Note 10+, but also not exactly the 5000 mAh of the S20 Ultra.

We also get a mere 25W charger in lieu of the 45W one seen with the Note 10+ and S20 Ultra. There’s also wireless charging and reverse wireless charging. Camera-wise, we get the same 10 MP shooter in a punch hole in the screen, for selfies, while at the back we have a triple cam setup: 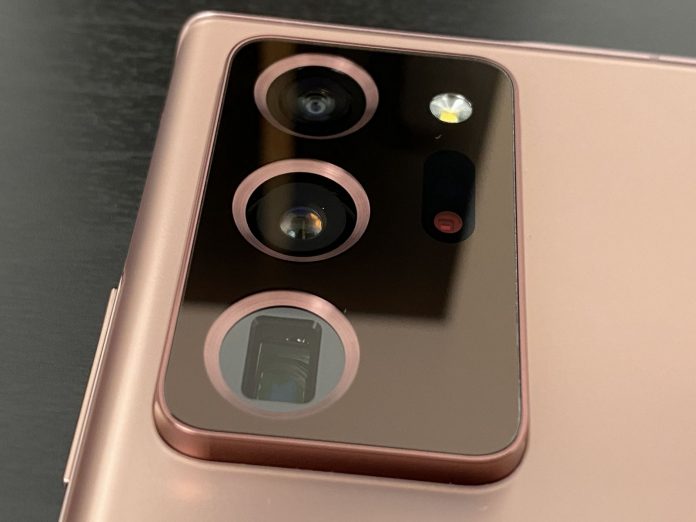 There’s novelty here, like the 8K 21:9 cinematic filming, as well as Omnidirectional audio capture and the option to capture with all microphones, front or rear ones, or connect an USB or Bluetooth mic. Single Take now creates up to 15 seconds of capture and offers new angles and having tested the zoom, I can tell you that more advanced levels of it feel more stable than on the Galaxy S20 Ultra. Closeups are also better, focus-wise. Connectivity-wise, we get 4G and 5G, WiFi 6, Bluetooth 5.0, GPS, NFC, USB-C 3.2 and the brand new UWB (Ultra Wide Band). 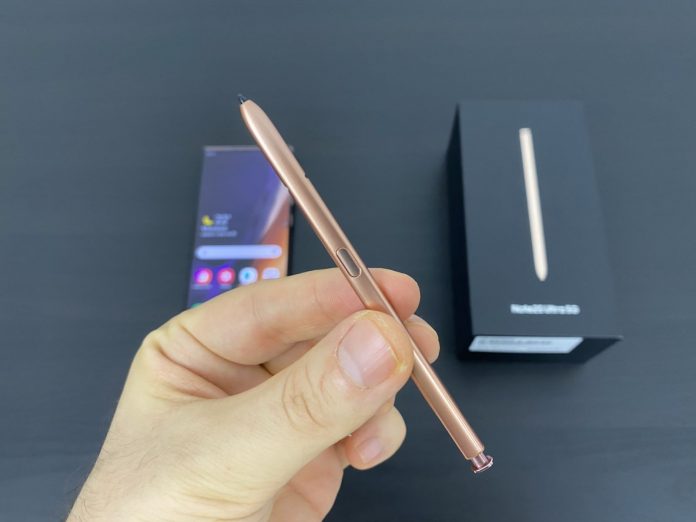 This technology lets you connect with a Samsung device by pointing at it and send files with huge speeds. There’s also DeX Wireless, which can mirror the screen of the Note 20 on a Samsung Smart TV wirelessly. The ultrasonic fingerprint scanner is also here, embedded in the screen and it’s much faster than on the S20 handsets. We’re also running on Android 10 with One UI 2.5 on top.

The new S-Pen has a latency of just 9 ms, down from 48 ms on the predecessors and 26 ms on the Note 20. It also gets 5 new gestures for navigation and control: Back, Recents, Home, Screen Write and Smart Select. You basically have to keep the S-Pen button pressed and draw a letter in the air, a “V” let’s say. Gestures are now more easily done than on the Note 10. You can also annotate on PDFs, save as PowerPoint, straighten crooked text and put bookmarks in audio notes via text. 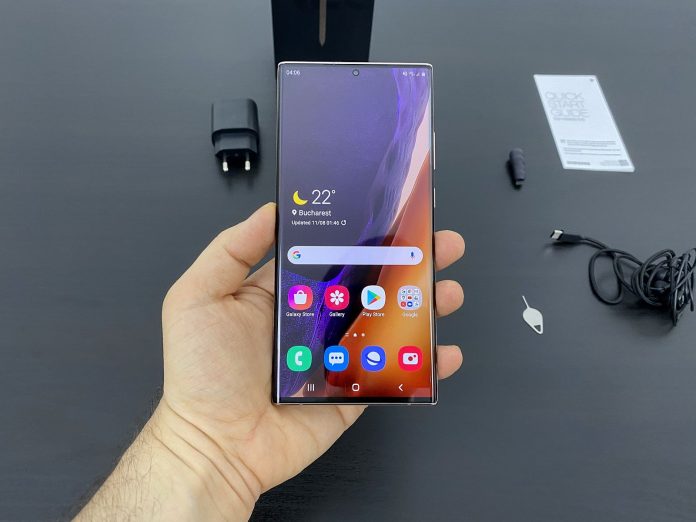 There’s also a collaboration with Microsoft, that brings 100 Xbox games on the phone via Game Pass/xCloud from September. Also working with Microsoft, Samsung offers improved syncing via Link to Windows. All the calls, notifications and work are synced up in real time with your PC.

All in all, as a conclusion, the device feels like it’s more mature, it’s meant for a business man, rather than a vlogger like the Note 10+ was. It has much improved zoom, a focus on cloud and wireless, an S-Pen with gestures that finally work and microphones are honestly its selling point if you’re a journalist. You can get the Note 20 Ultra 5G here.