Today was the big day of the ASUS ROG Phone 5 unveiling and we had the chance of playing with it early. That’s why we scored some impressions, ideas and unboxing for you to enjoy after the break. The device seems to be a bit more of an upgrade from the ROG Phone 3 compared to the jump from ROG Phone II to the 2020 unit. It adds an extra layer of anime, heart, minimalism and raw power. The highest end version goes all the way to 18 GB of RAM, adds two more buttons at the back and there’s so much more to unpack below.

First of all, the device comes in 3 versions: Standard, Pro and Ultimate. The latter has 18 GB of RAM and it’s the highest end model. We got to play with the standard one, with 256 GB of storage and 16 GB of RAM. By the way, the base version is split into 3 sub-versions: A, B and C. My guess is that we have the B. 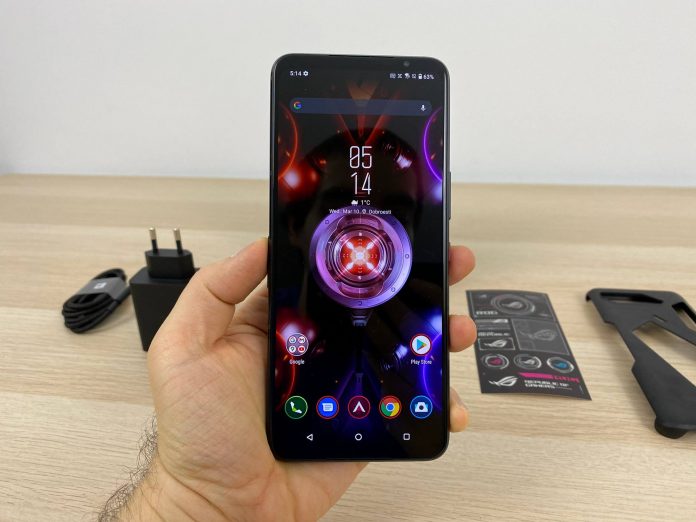 You can find the ROG Phone series on Amazon.

It comes in Phantom Black or Storm White and in the package you’re going to find the following items:

The packaging is also pretty neat, since the insides tell an Akira story with the aid of AR and the phones’s Armoury section. It all brings you to a sort of game that gives you a special AR avatar. 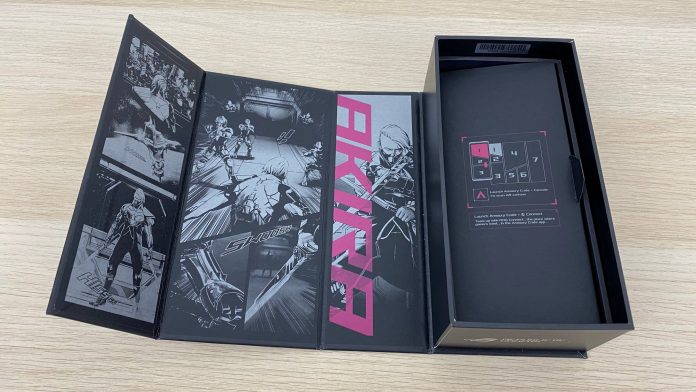 ASUS ROG Phone 5 is made of glass and metal, with Gorilla Glass 3 at the back and Gorilla Glass Victus upfront, plus an aluminum frame in between. The facade has bezels which are 25% narrower than the predecessor. It all weighs 238 grams, but the weight is well distributed on account of the 6000 mAh battery split into two 3000 mAh packs, placed at a bit of a distance. There’s also a rather large waistlne of 10.29 mm. We have an RGB logo at the back, a customizable one, in color, strobe and more. The Ultimate model has a PMOLED screen at the back instead of the RGB logo.

This is well built phone, but also a bit slippery. The speaker slits are narrower and there’s a side plug covering up the extra USB-C port and pins for the cooler. The back side is more low key now, sans metal insertions and iridescent areas. There’s a certain extra elegance here. 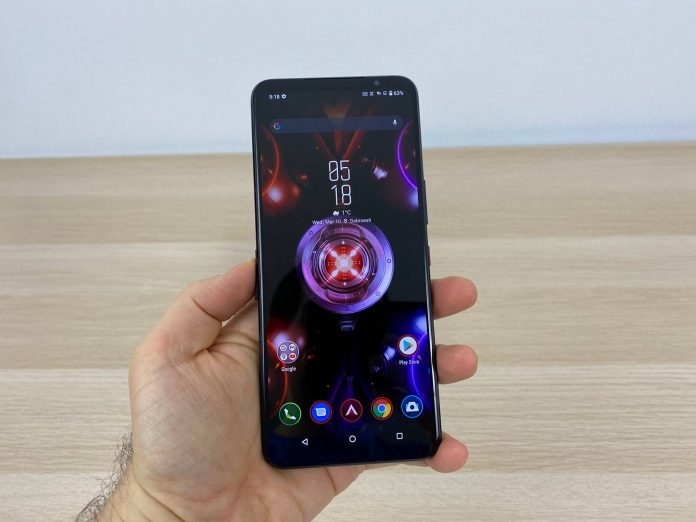 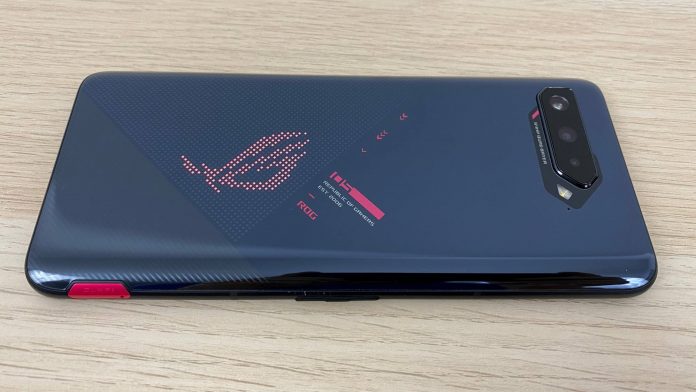 The beast inside is the new 5 nm Snapdragon 888 CPU, which has already taken down the 700k AnTuTu 8 limit in our test. It’s also cooled down by 2 graphite layers, a vapor chamber and an Aero Cooler 5 accessory. Then there’s 16 GB of LPDDR5 RAM, 256 GB of UFS 3.1 storage, but there’s no microSD. We did install lots of benchmarks, some games here, did updates and still there was no overheating. For security we have an in display optical fingerprint scanner, which works fine and fast, plus upfront we find dual stereo speakers.

These have Dirac HD tech and they’re symmetrical, liniar, have 7 magnets and mono amplifiers of the Cirrus Logic CS35L45 variety. There’s also AudioWizard with 10 band equalizers and more settins. Then there’s an audio jack, 5 mics with Ozo tech and a 6000 mah battery with 65W charging. 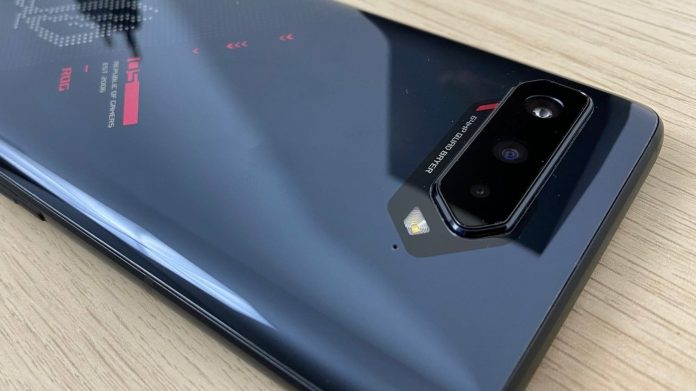 Nothing particularly fancy or new about the camera: we have a front 24 MP shooter sans notch or punch hole, plus a triple back camera with a main Sony IMX686 sensor and a 13 MP ultrawide shooter, plus 5 MP Macro cam. There’s 8K filming and 4K slow mo, plus an UI taken from the predecessor.

We have the best of the best here: 5G, a USB-C port at the bottom and one on the side, plus WiFi 6E, for the first time seen by me since the Galaxy S21 Ultra 5G on another device. There’s Bluetoth 5.2, NFC, GPS dual band and 3 WiFi antennae to use. 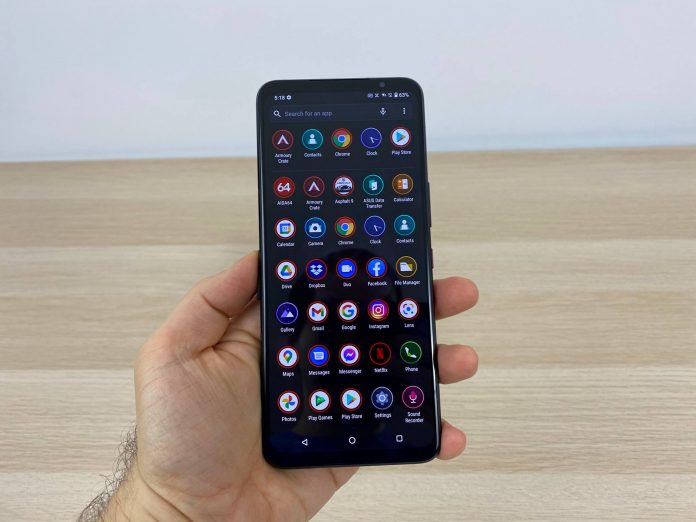 The phone runs on Android 11 with ROG UI on top and also uses ASUS Armoury, your go to area for tweaks related to CPU frequency, RAM allocation, settings for the cooler and RGB lighting. There’s key mapping, optimization and even a community to get into here, plus your selection of games by refresh rate criteria. You can tweak the side buttons and there are new background sounds and a music them to enjoy. There’s still an X Mode that triggers the best out of the phone’s resources.

AirTrigger 5 now has 9 sensors instead of 7. Game Genie has DND options and streaming options. 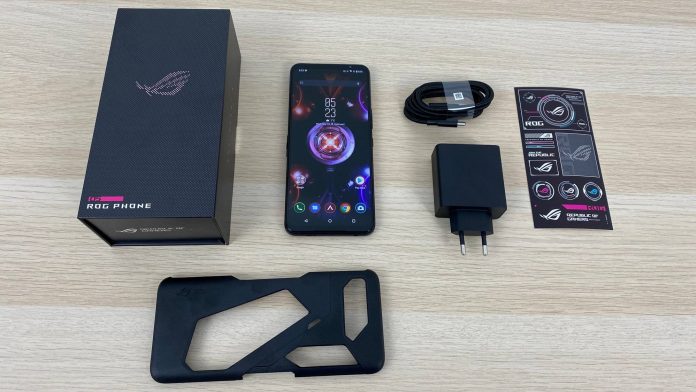 ROG Phone is a gaming phone with personality, extra elegance and more power. ASUS has scaled back the gaming identity, cutting back on the back side decorations, making the speakers more discrete and decreasing bezel size. They’re adding to the community and the story of the phone, with anime packaging, music in the Armoury, a community, it’s a “Club” you’re getting into when buying this phone. The UI is better organized in the Console area and the RGB logo is also a bit more low key. It’s a powerful device, with a very fast charging and welcome gaming features.

The only 2 drawbacks I could find were the slippery body and scratchable sides on account of the Aero Cooler and its sharp pins.

You can get the ROG Phones here