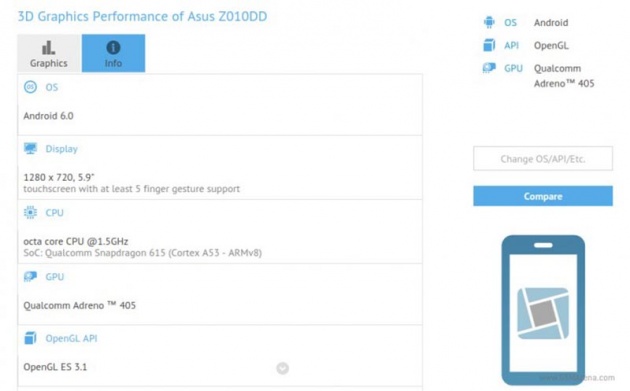 2015 was a big year for ASUS, that sold 20 million smartphones and is gunning for 30 million this year. They are going to join the high end game in 2016 and they’ll do that through the ASUS ZenFone 3 series, that has just leaked via the info below.

Sources from Taiwan mention that in May or June we’ll witness the debut of the ASUS ZenFone 3 series, bringing a fingerprint scanner into the scene and high end specs. Apparently, ASUS general manager Jerry Shen has confirmed these things already. Meanwhile, we get a leak of one of the newcomers, codenamed ASUS Z010D and detailed via a leaked benchmark.

It packs a 5.9 inch HD screen, a Snapdragon 615 processor and 3 GB of RAM, as well as 32 GB of storage. There’s also a 13 MP back camera and 5 MP front shooter in the mix. The more high end units are still a mystery and we expect to be amazed by Quad HD screens, curved edges, big batteries and more.