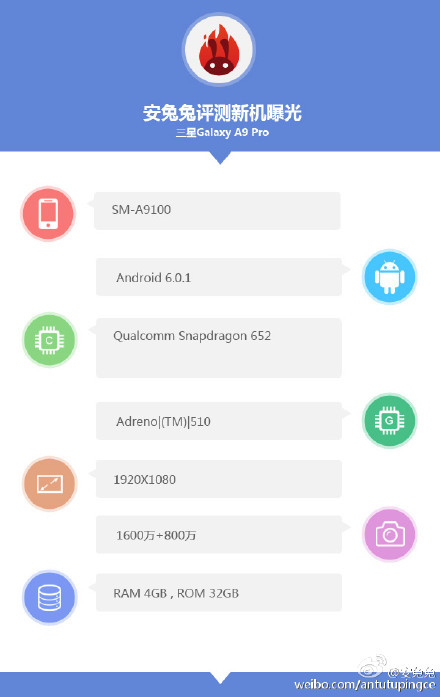 A while ago we’ve found out about the existence of a new smartphone called Samsung Galaxy A9 Pro, phone that was tested in India by the South-Korean company. Today we get some information from AnTuTu too, benchmark that basically confirms the specs that were revealed at the beggining of February by GFXBench.

From the specs point of view, it seems that Samsung Galaxy A9 Pro will be found in the middle zone (between mid-range and high-end specs). We’ll be getting an octa-core Qualcomm Snapdragon 652 processor on 64-bit, processor clocked at 1.8 GHz, 4 GB of RAM memory and a 5.5 inch Full HD display with a 1920 by 1080 pixels resolution.

There’s an Adreno 510 GPU, a 16-megapixel rear camera with LED flash, a 8-megapixel front-facing sensor and 32 GB space of internal storage. The phone benchmarked in AnTuTu runs Android 6.0.1 Marshmallow, but according to some sources is expected a Windows 10 Mobile variant too.

As for the design, we expect to see some elements borrowed from the actual Galaxy A (2016) range, with glass back cover, and 2.5D glass panel applied on the display.