AT&T has just provided an ambitious memo to its sales staff, encouraging them to “counter Palm Pre” and diminish its appeal, by underlining the advantages of the iPhone, offered by the carrier. 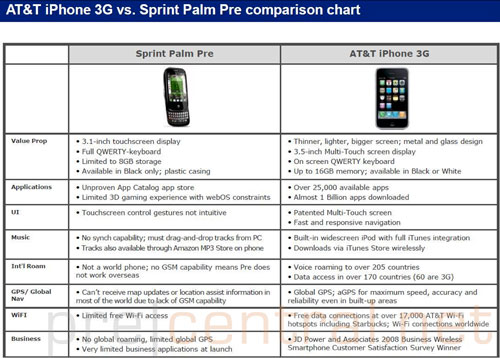 The matter is pretty objective and it quotes Pre’s weak points, stuff like the lack of music sync software, the missing 16 GB handset version, no support for roaming outside of North America and more. Also, sales staff should say that the device is not intuitive, the App Catalog is “unproven” and that Palm is mere plastic, compared to the iPhone’s metal-glass combo.

So, it urns out that AT&T challenges Sprint to a duel, now that we’re only weeks (or maybe days?) away from Pre’s launch. However, some of the info above is not 100% accurate, since the iPhone uses a plastic back, Palm’s own App Store will be more loose than Apple’s and Pre uses many gestures that are similar to the ones supported on the iPhone.

Where does AT&T’s fear come from? It may be the fact that Pre is the only non-iPhone handset using a multi-touch interface, an App Store of its own and music purchases via Amazon MP3.