Sprint has just leaked a PDF showing the future handset releases of the following top devices on the market. Among the devices mentioned there’s the AT&T version of HTC Touch Pro2, that’ll make its debut with Windows Mobile 6.1 on board and not 6.5, as we thought it would. 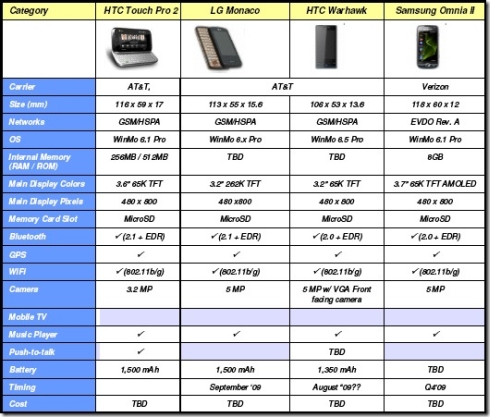 HTC Warhawk is also on the list, but this device is better known as Diamond 2, that will get WM 6.5 on its specs list and a very near launch date. Another interesting aspect is the presence of a front VGA camera on this device, a premiere for AT&T.

Also among the leaks is Samsung Omnia 2, a very familiar face, that’ll come with 8GB of internal memory, WM 6.1 and a 5 megapixel camera. LG Monaco is by far the most interesting handset on the list, a smartphone that should have been launched with Windows Mobile 7, but it’s more likely coming with WM 6.5 and a Snapdragon CPU on board, in September.