BLU Products is a company that makes Android budget phones, among others and now they’ve announced a bunch of new cheap handsets, with some really interesting specs. Some of their devices remind us of one of the brands we’re frequently testing here at GSMDome.com: Allview. So, let’s see the newcomers: Quattro 4.5, 4.5 HD and 5.7 HD. 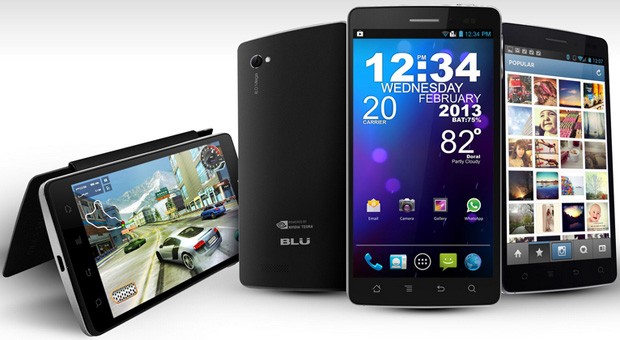 The new models fit within the Quattro series of products and they have the following elements in common: Android 4.0 and quad core processors at 1.5 GHz (Tegra 3). At the bottom entry level of the series lies the $250 Quattro 4.5, featuring a qHD display, a 5 megapixel camera, 4 GB of built in storage and a microSD card slot. Then there’s the $300 Quattro 5.7 HD, shown above, with the same storage, but a 720p HUGE display this time and an 8 megapixel camera.

Then comes the $350 Quattro 4.5 HD, that has pretty much the same specs as its non HD cousin, except for the curved 720p display with Gorilla Glass and the 16 GB of storage, plus a more light sensitive 8 megapixel camera. The smaller units are coming to USA this month, while the 5.7 inch beast comes in late March. They will all be unlocked HSPA+ 3G models.